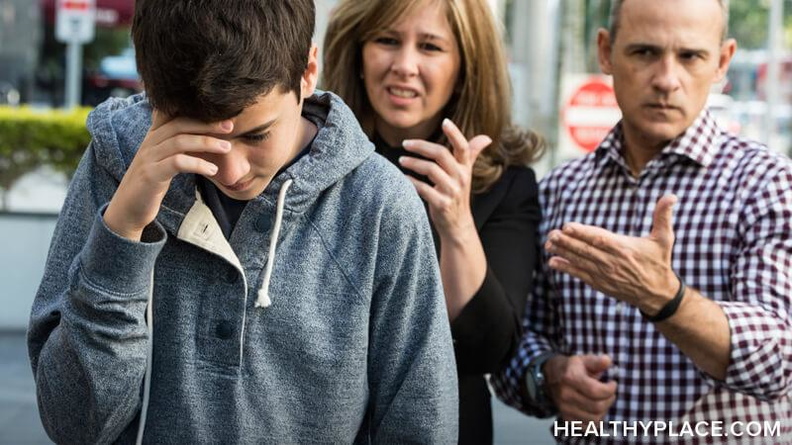 Today's Phone Call from School involved a camera. My first (horrified) thought was that Bob had been sneaking bathroom-cam video of his female classmates, but it wasn't quite that serious. He had merely taken his camera to school, insisted on having it out during class, and refused to put it away. But when the teacher took it from him, his anger escalated to the point he shoved another student, threw a book, and ran out of the classroom. Staff found him hiding in the restroom and the principal escorted him to the office.

And it's only Tuesday morning (What Works When Disciplining a Child with Mental Illness).

Disciplining a Child with a Psychiatric Illness Requires Careful Consideration

I now have the next six hours to determine an appropriate punishment for the crime; which means I have to dissect this incident carefully. If Bob were any other child, I would take the camera away for a predetermined (and lengthy) period of time and probably ground him from some cherished activity, like video games or TV time. In Bob's case, however, it's more than a matter of a kid doing dumb kid stuff. There are other factors to consider: 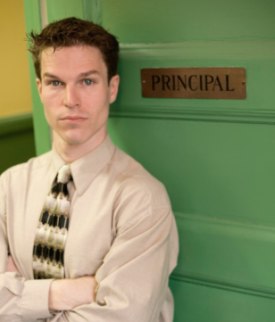 Bob's current state of crisis--This is the time of year when Bob tends toward mania as his primary mood.

Bob's teacher noted he's having his most difficult time in the morning, before lunch. Knowing what little I know about bipolar and circadian rhythm and changing light/dark patterns this time of year, I can only wonder if Bob is maybe not "with it" until after lunch? He's not sleeping, but that doesn't mean he isn't tired. Maybe his body and mind aren't fully waking until after he's had his grilled cheese and fruit.

Mania and daylight hours aside, the fact remains our rule is NO TOYS OR OTHER MISCELLANY FROM HOME TO SCHOOL WITHOUT EXPRESS PARENTAL PERMISSION, period. Bob is notorious for trying to get around this rule, which is why we perform random backpack inspections. (Of course, no inspection was performed this morning.) His father has made this more difficult by giving him a Swiss Army backpack with about 700 pockets in which to stash contraband. 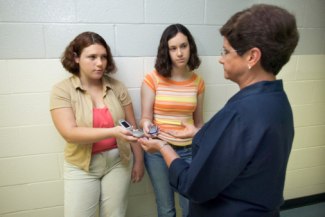 So...for starters, the camera is on probation. It will be placed in my custody until further notice.

Second, because he cannot be trusted to not sneak things to school, his multi-pocketed backpack will be returned to Dad's house and replaced with a plain old book bag. One chamber. Two handles. Zero secret compartments.

Third, and hardest to address, the explosive anger reaction to his reprimand at school. Knowing he has little control over his actions in his morning state makes it hard to punish him. Still, he has to know there are consequences for his behavior regardless of the "why." So he will lose television privileges for the evening and will be assigned an extra chore.

I'm beginning to think it's time I add "management and supervisory skills" to my resume. I certainly often feel more like an HR Director than a parent.

Angela-
Thank you so much for the websites, I will pass them on. I agree on the "older" version of discipline being different. Today's "instant" society is far removed from the era of grandma.
Gary- I also agree that spanking not only triggers, but can bring on further aggression. From what my friend has told me, things are getting worse, not better. Although I appreciate the offer of phone contact, I live with DID and find personal contact difficult at best...even via phone.
Megan- Thank you too for your response. I will research the book and possibly use it for a gift for my friend. The grandchild is a 10 year old female. She is entering puberty which makes the situation even more
difficult.
Thank everyone for your kindness. Since finding Healthyplace.com for personal reasons I have found it beneficial in many other aspects as well.
Poser

Angela: Your response to your child's behavior was great. Many parents struggle to be thoughtful and reasonable with consequences, especially if the child's school behavior interferes with the parent's day. Nice job!
Poser: A book I recommend to many of the parents I work with in my therapy practice is: 'Treating the Tough Adolescent' by Scott Sells. I don't know how old your friend's grandchild is, but this book is an excellent source of information for anyone raising a child/teen with Conduct Disorder or Oppositional Defiant Disorder. Best of luck to your friend.

I've treated over 2500 children in my psychotherapy practice including bipolar and conduct disorder kids. I'd be delighted to spend some time on the phone with Poser. And Anegla, I'd be happy to write an article for you on this subject.
Several points to remember.
1. Spanking triggers more aggression and doesn't work.
2. Consequences often don't work because the bipolar child has serious problems with emotional regulation. They can't think about the consequence when they start misbehavior.
These problems are unbelievably painful for parents. My heart goes out to these parents. But there are answers.
Gary M Unruh MSW LCSW

Angela-
I have a friend who is raising a grandchild with conduct disorder. The grandchild was initially raised in a physically, emotionally and sexually abusive household. This friend currently uses spanking as method of correction. Is there a good resource of how to discipline a child with mental illness that I can send my friend to before further damage is done?
Poser

@Poser, bear in mind, I just did a quick internet search to try to find something to point you to--I'm sure other readers may have other sources to offer?
http://www.patientcenters.com/bipolar/news/discipline.html - although this is from a bipolar child perspective, i think the logic behind it rings true for any child, mental illness or not.
http://www.healthyplace.com/parenting/challenge-of-difficult-children/how-kids-grow-defin… - a HP article about what "normal" kid behavior is and discipline tactics
http://www.healthyplace.com/parenting/challenge-of-difficult-children/parenting-books/men… offers a reading list on this topic.
I will say I find the older generations have a real problem with anything that doesn't involve spanking. It may be harder than you think to "break" your friend of the habit and way of thinking. I wish you and her (and the child) lots of luck!