Medication Side Effects Troublesome for Mentally Ill Children and Parents

When your child has a psychiatric illness, your plate fills rather quickly--psychiatrist appointments, therapist appointments, IEP meetings, trips to the pharmacy and the never-ending juggling of prescription medications. But there are other things crowding the china--things like medication side effects--we may have no idea how to handle, even if we feel we've "mastered" all there is to know about our child's diagnosis.

Children with mental illness experience myriad side effects that create even more problems for them and their parents; one in particular has hit us the hardest. In our house, the most persistent medication side effect is bedwetting. And it's driving us all crazy. 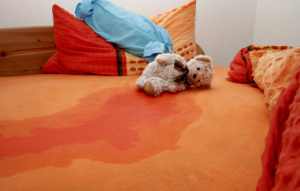 I was never one to make a big deal out of Bob's bedwetting. He's always been a very heavy sleeper (when he would finally give up and go to sleep, that is)--the only "bump" in the night ever capable of rousing him was an actual tornado. As he entered his elementary school years, I tried various things like limiting his fluids in the evening (didn't matter) and waking him up in the night (impossible). Nothing worked. When he started taking lithium a few years ago--knowing one side effect is frequent urination--I resigned myself to a lifetime of buying nighttime disposable underpants.

Bob is now ten, and the problem isn't getting better; it's gotten worse. For a while last year, he seemed to have outgrown it--only to return to it six months later. He now wears two disposable undergarments at night, but it's not enough, and he often wakes up with his bed completely soaked. (We recently tossed his traditional mattress and bought him an inflatable vinyl mattress--luckily, he thinks it's "awesome.")

He's starting to reach the age where this perceived act of "babyhood" is bothersome. Not only does he think he should have outgrown it, he doesn't like losing precious sleep for waking up wet and cold. I've explained to him his medication simply makes him have to "go" more. He understands, but it doesn't make it any less aggravating for him. 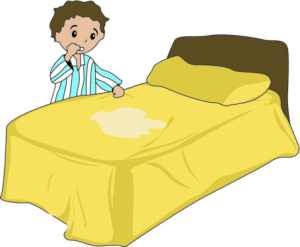 Or for me. Nighttime undergarments are expensive, and if two at a time doesn't do the trick, I'm not sure what else we can do. (I've considered adult diapers, but Bob is tall and pencil-thin, so fit is a big issue.) It's also hard to keep up with the family's laundry when we're constantly washing sheets and pillows.

I admit this is also why I kept Bob from sleepovers for so long. He finally had one for his birthday with his father--and he's the one who broached the subject with me beforehand, mentioning he hoped his friend understood about his "pull-ups."

Thankfully, the friend did.

The next friend, of course, may not, especially the older Bob gets. I just hope this particular issue resolves on its own, sooner than later.