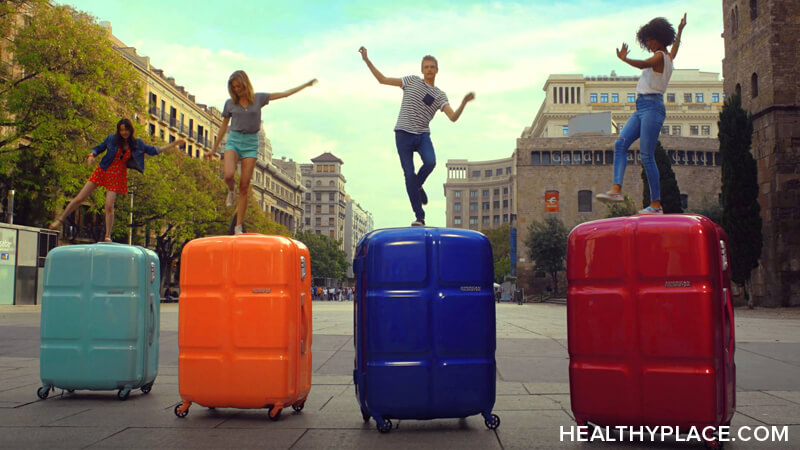 A child's mental illness isolates the whole family. Social anxiety, unpredictable outbursts, sensory issues--all these things can make the outside world exhausting for your child (Mental Illness, Isolation, and Loneliness). Judgment, stigma, and fear make it exhausting for parents. Isolation in childhood mental illness is our biggest enemy. Fight it.

Don't Give in to Childhood Mental Illness Isolation

Isolating feels easy. By avoiding family get-togethers, you avoid conversations about your "spirited" child or how childhood mental illness is a ploy instigated by big pharma. By avoiding friends, you don't have to explain your child's meltdowns or feel embarrassed when you have to grab him right before he jumps into the aquarium at the zoo.

The downfalls, however, are loneliness and boredom. I learned the hard way that my son's boredom at home was far worse than our discomfort in the community. When he gets bored, he goes into meltdown mode. His attention-deficit/hyperactivity disorder (ADHD) means he is bored about every 20 minutes. These days, unfortunately, if my son is at home, he now expects to play video games. When he learns he can't, the resulting outbursts can be anywhere from 20 minutes to an hour long. It's become almost necessary that I plan playdates, community activities, and travel if I want to maintain the whole household's mental health.

How to Limit Isolation Caused by Childhood Mental Illness

Don't avoid playdates or birthday parties. I know, visions of all that could go wrong are dancing through your head. I have those visions, too. However, the kids my child has known for years are more forgiving of his behaviors because they understand him better, and I feel they understand him better because they see him in more places than just school. Yes, we've had to leave activities early at times because of ADHD symptoms, but that's alright. We have him in social skills groups and he's done after-school behavior management to tackle some of this. There are many ways to help your child with socialization.

For instance, my husband and I joined the Parent Teacher Association at my children's school (Activities for ADHD Children and Family Members). This had the unplanned side-effect of getting us connected with teachers and administrators who then came to know my child even better. He wasn't just the "troublesome" kid having outbursts in their hallways.

Plan and Go on Vacations

In the previous post called Traveling with a Child with Mental Illness, the author's experiences mirror mine; and, like her, I've turned traveling into an art. The way I see it, travel is anxiety-provoking, but being the parent of a child with mental illness means regular anxiety anyway. I focus on what scenarios cause less anxiety rather than zero anxiety. Maybe it's just me, but I fear isolation more than I fear the judgment of strangers. Visions of my child being a lonely teenager terrify me more than the prospect of him having an outburst on an outing (which says a lot because the outburst scenario terrifies me a lot).

I'm not downplaying other parents' anxieties. What I am saying is that all families deserve better than isolation. Mental illness does not make our families and our children less worthy of fulfilling lives. We can't let it limit us.

Traveling with a Child with Mental Illness to Avoid Isolation

My video this month reflects what I've come to learn about planning vacations with my children.

Melissa David is a mother based out of Minnesota. She has two young children, one of whom struggles with mental illness.The support and wisdom of other parents proved invaluable to her in raising both her children; and so she hopes to pay it forward to other parents via Life With Bob. You can find her on Facebook and Twitter.
How to Advocate for an Individualized Education Plan
Life with Disruptive Mood Dysregulation Disorder (DMDD)
Ivan Velasquez
April, 30 2017 at 6:55 pm

Limiting isolation can improve the lives of both the parent and child with a mental illness. In the video posted I felt it was very helpful in giving other parents tips when traveling with children with a mental illness. The main point that I derived was to always plan ahead. Planning as if you would cancel everything you are doing, having an escape route in case of an outburst, and planning breaks are important factors. Raising a child with an anxiety and emotional disorder can be stressing but not doing anything and sitting around can cause possibly be worse than having your child participate in activities. I like how this blog post incorporated how a parent can get involved in community activities, which can lead others to understand a child with a mental illness. This is a great blog post that hit many points that can help other families!

Great read. I think this is so comforting, and helpful, of parents of children with mental illness. I love the idea of thinking about plans that will cause less stress, than trying to create plans with zero stress -- this is almost impossible in any and every scenario any way so the attempt is just maddening! The awareness and prioritization in this piece is great.