Have you ever tried being something that you’re not? I think it’s safe to say that all of us have gone through this at some point in our lives. It makes us feel as if we are a fake, and that we’re being untrue to ourselves. It may also lead to deep depression and low self-esteem, especially when it comes to lesbian, gay, bisexual, transgender, or questioning (LGBTQ) individuals. Those who identify as LGBTQ have a higher chance of self-harm, substance abuse, and eating disorders, for example, which are all linked to depression.

My Personal Struggle With My Gender Identity 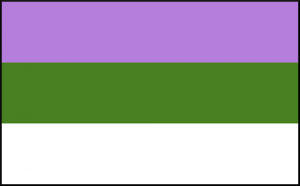 For the past few months, I have forced myself to be more feminine. I started buying more feminine clothing and wearing more makeup in the hopes that I will start liking it. I have always been more of a tomboy. I prefer jeans and a hoodie over a cute dress on most days. But it goes beyond that for me. I have been trying to deny this for a long time, but I think it’s pretty safe to say that I’m genderqueer. I find myself feeling more masculine almost all the time. I don’t really feel like a girl.

I know that my sex is female, but my gender is definitely not in alignment with my sex. Why else would I hate my breasts so much? They feel foreign and like they don’t belong on my body. However, I know that I am not transgender because there are some days where I feel more feminine and identify more as a woman. The technical definition of genderqueer is: “a catch-all category for gender identities other than man and woman, thus outside of the gender binary and cisnormativity “ (Wikipedia).

My Gender Identity and Depression

I sincerely believe that denying my genderqueer identity has worsened my depression and anxiety. The past few months have been some of the hardest of my life. I find myself wanting to cut again, I’ve been drinking more alcohol, and I’ve been living life like a ghost. My body is here, but my mind is somewhere far, far away. I’m disappointed to say that I’ve been having dark thoughts, even suicidal thoughts. I don’t want something bad to happen, so this is why I have decided to come out as genderqueer.

Telling People about My Gender Identity

I am happy to say that my husband supports me in coming to terms with my gender identity. I was afraid that he was going to reject me and even be freaked out, but he has been extremely supportive and caring. I have told a close friend who is part of the LGBTQ community but cannot come out yet, as well as a trusted family member, and I’m happy that they have been understanding and supportive as well. I am a little afraid of coming out to others, including my family, but I think in time I will find the strength to fully come out to the world.