Can Combat PTSD Get Transmitted to Children From Their Parents?

Secondary PTSD in Children of Parents with Combat PTSD 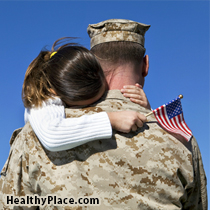 The suffering of children can be thought of as secondary combat PTSD – secondary in that it is one step away from the mortar rounds that may have traumatized the actual individual; however, even though the route of the trauma may be secondary, its symptoms and effects may be the same as the primary sufferer. In other words, children can develop the same PTSD symptoms from experiencing a war zone at home. The transmission of combat PTSD from parent to child is also known as intergenerational transmission of trauma. This intergenerational transmission of trauma has been seen in families of soldiers, in those of Holocaust survivors, and others.

How is Combat PTSD Transmitted to Children?

There are many ways that a parent with combat PTSD can transmit their symptoms onto children by increasing their anxiety. The child then deals with that anxiety by acting out the same PTSD symptoms seen in the parent. For example:

It’s important to remember that this transmission of combat PTSD to children is not the trauma-survivor’s fault; it is simply something that needs to be addressed in combat PTSD treatment. No child should have to suffer at the hands of PTSD and once survivors are made aware of this possibility, they can change their behaviors such that the children are less affected.

APA Reference
Croft, H. (2014, March 5). Can Combat PTSD Get Transmitted to Children From Their Parents?, HealthyPlace. Retrieved on 2023, February 7 from https://www.healthyplace.com/blogs/understandingcombatptsd/2014/03/combat-ptsd-transmitted-children-parents

Prolonged Exposure Therapy for Combat PTSD
Effects of Combat PTSD on the Children of Veterans
Doug
November, 2 2018 at 7:43 pm

Wow I'm 51 work side by side with my father for 25 years I took him to the VA to get help 20 years ago ... I have all these symptoms I been trying to get help hard to explain how to tell a Dr wont go into details but this helps

Hi From Australia :)
My mother (who was Maltese) was very traumatized in the war, I believe as when she had us 5 kids she developed manic depression. I was very close to her also.
When my husband died nearly 13 years ago now (quiet tragically) I believe I may suffer from PTSD as since that time I havnt been able to move on with my life. I feel down a lot and very much feel a sense of disconnection from life and people. I function in life fairly well but there is always a underlying sense of emptyness or loss or lonliness etc. It seems life a energy force that is somewhat just part of me and quite unmovable. I think I have done everything for myself that is know to man. I am very much into Eckhart Tolles work and think that his work has helped me immensley. But Im wondering if I have PTSD triggered by the loss of my husband but also maybe inherited from my mother. I am so desperate to get out of this stuckness and depressed and suppressed energy inside of me that i continually buy books and programs etc etc. It seems endless though and sometimes i think that the chasing of therapies maybe perpetuates the sense of not good enough and lack. I just so want to live life to the fullest. Have also tried some councellors and just havnt come across anyone who is good in Adelaide. A question I have for you is what validity (if any) is there to all these programs that seemed to have surfaced lately about rewiring the brain. John Arasaf and Mark Waldman both sell these types of program that promise to rewire the brain to success and happiness. Just wondering if this is good marketing or if there is such practices to rewire the brain?
thank you for your time
Sue

Dear Sue,
I cannot diagnose you since I have not seen you, but from what you describe in your note, it would seem you suffer from a depression and not PTSD. The important thing is not what we call it, but what you need to do about it.
I would suggest that you see a good psychiatrist in your area for an appropriate diagnosis. Then the decision for treatment (psychotherapy or medication) can be made more appropriately.
With regards to "rewiring" techniques, it is my understanding that we are some time off before we can treat people with this technique and need more time for evaluation of its effectiveness. However, the choice to "give it a try" has to be yours.
Sorry I could not be of more help.
Best,
Harry Croft, MD
Medical Director, HealthyPlace.com

Thank you very much for sharing with us about the intergenerational transmission of trauma as I was not aware of it. I think this is widening our knowledge on dealing with family members with PTSD that we also need to investigate other members of their family if they have secondary PTSD.
Personally I am person who is much interested and deal with PTSD patients sometimes in my profession.
I am interested in your articles.
Best regards
Liness

This is a fascinating idea. My kids were 5 and 6 when I left for combat. We had a good relationship before I left. But when I came home all hell broke loose in my mental health and honestly, their entire growing up years they had to deal with "PTSD dad," which wasn't always very pleasant. It's funny, I've often wondered if this was the case, that they could possibly have PTSD also, and their mother as well. They have suffered emotionally. They're grown now with their own families. My fervent hope is that the American people will truly understand the deep consequences of war upon not only the troops but even their children as well. I believe the more understanding we have, we will be more reticent to go to war in the first place. Thanks for bringing this out into the open.