How to Help the Children of Veterans with Combat PTSD

In the last two articles I commented on how combat posttraumatic stress disorder (PTSD) can be transmitted between parent veterans and their children and what combat-related PTSD might look like in the children of veterans. Today, I talk about what a parent with combat PTSD can do to fight its effects in his or her children.

Learning about Combat PTSD in Children and Parents

The first thing parent veterans with PTSD can do is learn about their own symptoms and the symptoms of their children. It’s impossible to fight the effects of a disorder that you do not understand. By narrowing down your own experiences of combat-related PTSD and those of your children, you can begin to address and change them.

Once parent veterans understand combat-related PTSD, they can better communicate its effects to their children. It’s important to accurately explain the cause of the PTSD without going into graphic detail. This shows the child that the parent’s symptoms are not related to the child and that he or she is not to blame.

Modeling Healthy Behavior to Help the Children of Veterans 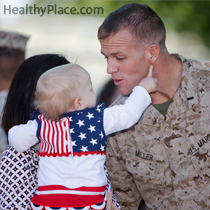 Battling this problem is about modeling different behavior that shows the child, accurately, how the world is. Of course, there are dangers in the world, but a parent with combat PTSD has to be particularly conscious of behaving in a way that indicates that a child is usually safe and that the parent has the power to keep that child safe (to the best of his or her ability).

Consistency and Nurturing a Child of a Veteran

Unfortunately, veteran parents with combat-related PTSD sometimes “check out” of their family lives due to the symptoms of PTSD such as concerns over flashbacks and anger outbursts. Children, however, need a nurturing parent that is present and involved in their lives. Missing out on events like birthday parties and soccer games only goes to show the child that they are “not worth showing up for.”

This presence, along with other aspects of parenting must be consistent. Being a consistent parent is one of the best ways to reduce anxiety in children and tell them they are safe. Being consistent also means getting control of anger outbursts and finding healthy ways to express emotions including love and affection.

Treatment for the Parent and Child with PTSD Symptoms

Of course, sometimes just changing your behavior, as a parent, isn’t enough; sometimes professional intervention is needed to help the children of veterans. This isn’t indicative of a failure on anyone’s part, it is simply indicative of how powerful the effects of trauma can be.

Hopefully the veteran with combat PTSD is already receiving professional help, such as trauma therapy, but if he or she isn’t, now is a good time to start. Professional help, such as family therapy or individual psychotherapy for the child, can help a parent and child work through the disruption in the home and help a child have the healthy and happy childhood they deserve.

If you’re a veteran and you need help for yourself or your family surrounding PTSD, please see the Veteran Affair's National Center for PTSD for more information on how to get help.

APA Reference
Croft, H. (2014, April 2). How to Help the Children of Veterans with Combat PTSD, HealthyPlace. Retrieved on 2022, May 19 from https://www.healthyplace.com/blogs/understandingcombatptsd/2014/04/help-children-veterans-combat-ptsd

What can you do when the parent with PTS refuses to acknowledge the effects of PTS on their children?