Whenever a tragedy occurs, it is natural to look for someone or something to blame, even when the blame isn’t rational; and no one is guiltier of this than the media. This was clearly evident in the way the media treated the tragic Fort Hood shooting last week in which Spc. Ivan Lopez shot and killed three people and wounded 16 others before taking his own life. Instead of just reporting these facts, many in the media tried to tie these actions to combat-related posttraumatic-stress disorder (PTSD). And while Spc. Lopez was being evaluated for PTSD, there is no way of knowing whether his actions were in any way related to the disorder and insinuating such does a great disservice to veterans and those serving in the military. In fact, all the media has done is further stigmatize PTSD.

The Symptoms of Combat PTSD Rarely Lead to Violence

It is critical to realize that the symptoms of combat PTSD do include anger but rarely lead to violence. This case, even if proven to be related to PTSD, is extremely atypical. It’s so atypical that it becomes news.

The Effects of the Stigma around Combat PTSD

Suggesting that combat PTSD caused this horrific violence simply reinforces so many of the myths that people with combat-related PTSD have to fight and stigmatizes an already maligned illness. This hurts us all, but it particularly harms veterans and service members who are either trying to receive treatment for PTSD or who are trying to get on with their lives after service. 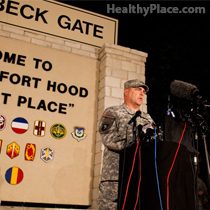 This combat PTSD stigma causes people to feel that veterans and service members are dangerous and unreliable and this prevents people from getting appropriate jobs, having relationships, licensure, and so on.

I have talked to many employers who don’t want to hire veterans because they assume that all veterans suffer from combat PTSD and that this condition will make them poor employees. But what we know, of course, is that many employers have people with PTSD on their staff already as many outside of service also suffer from the condition due to traumatic events such as sexual assault or childhood abuse. Additionally, only one-in-five veterans suffer from the condition.

In short, by erroneously relating this criminal and horrific behavior to combat PTSD, the media has perpetuated myths and stigma in the eyes of the public. It is our job, as advocates, to fight this stigma with the facts. And the facts are that the men and women who serve, whether they suffer from combat-related PTSD or not, do not deserve to be painted with the same brush as someone who has committed such a heinous act.

How to Help the Children of Veterans with Combat PTSD
Alternative Therapy for PTSD – Acupuncture
Toth Antal
April, 10 2014 at 2:26 am

I have paranoia schizophrenie. I don't get job with my diagnose in my country in Hungary, in Europian Union. :-(