Posttraumatic stress disorder (PTSD) is a problem not just for veterans, but also for people who have experienced other types of trauma such as a natural disaster or an assault. Because of this, many types of therapy have been tried to treat PTSD including alternative therapies.

One such alternative therapy for PTSD is acupuncture. While many consider sticking pins (not technically a needle as it is not typically hollow) in various locations throughout the body to be a fringe practice, there have actually been four randomized controlled trials and two uncontrolled trials on this practice and their results are promising. 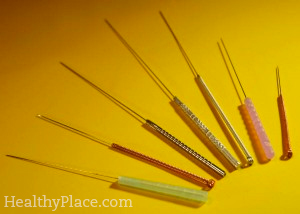 Evidence for Acupuncture Use in PTSD Treatment

The review, Acupuncture for Posttraumatic Stress Disorder: A Systematic Review of Randomized Controlled Trials and Prospective Clinical Trials, found that:

What Does this Mean for People Suffering from Combat PTSD?

The studies evaluating acupuncture for PTSD treatment are not combat PTSD specific, but that doesn’t mean their results wouldn’t translate to that population (and some veterans were in the study populations). We don’t know for sure one way or another.

The one well-designed study, noted above, did show that acupuncture was effective in treating PTSD and that is promising, but the evidence is relatively scarce and based on what we know, nothing definitive can be pronounced.

However, that doesn’t mean that acupuncture might not be a good part of your combat PTSD treatment regimen. While I wouldn’t recommend dropping other proven treatments like an SSRI or CBT, adding acupuncture might be something you could consider and talk to your doctor about.

Media Stigmatizes Combat PTSD After Fort Hood Shooting
Suicides Rates Among Veterans Alarming – What Can We Do?
jerusha
July, 6 2015 at 7:49 am

good article, thanks for sharing

Thanks, Harry, for enlightening all on the efficacy of therapies that have been around a lot longer than our 'traditional' medicine! It's past time to get back to basics.

Hello All-
First of all, I offer much respect and gratitude to our war veterans out there, and I hope that PTSD will be better understood going forward. I am conducting research into the effects acupuncture may have in the treatment of PTSD (both as a result of being a war veteran, or from other causes). If you have tried acupuncture for PTSD and would be willing to write about it (if it helped, how it helped), please write to acupunctureresearch@yahoo.com with your experience. This is a private survey, and identities are kept completely confidential.
Thank you.

P.T.S.D. We as a country need to be educated in the signs and symptoms. Like we recognize alcoholism and drug addiction. This Trauma affects people from all walks of life and often is misdiagnosed as a mental illness or anxiety and treated with a variety of drugs that do not help the problem just mask it. Be aware of who you are around and the way they react to everyday things. Such as back fire from a car loud noises and fireworks, that’s just a few stressors most of those who are afflicted don’t even know. . Some Military War Vets have kind of adopted a way that has been helping them sense before the V.A. started using it, that is video games like the Activision game Call of Duty just to name one.
Society has said video games are bad and influence people to bad things - so the very best studies have shown. The V.A. has also gotten the idea that video games help but they target your specific event with a VR system it’s not as impersonal as being in the comforts of your own home but it is helping vets cope with their specific trigger situation and work through the fear or mental pain of their emotional trauma by pinpoint targeting your specific trigger situation and helping you walk threw it frame by frame. Knowing your triggers will also help.

I have been suffering from depression from March 2012 till a fortnight ago, trying almost all SSRI, SNRIS and atypical medication, Remeron and accupuncture for a fortnight ago. Now I am on Effexor XR in the morning and Remeron before sleep and top up with twice a week accupuncture. I would not claim 100% recovery but I feel on top of the world right now. Thank you for your encouraging news in your web site; there is sunshine after a storm. Greatly appreciated your superb articles and inspiring articles.