Suicides Rates Among Veterans Alarming – What Can We Do?

When one enters the military a thought that may cross the mind of the young soldier, or their loved ones, might be the possibility of dying in combat. This is a reasonable concern for all involved.

But what people rarely are concerned about is the risk of death when one gets out of the military. While it might seem, to civilians, like this would be the least likely time in a person’s life to die by suicide, the numbers tell a completely different story.

Rates of Suicide among Veterans

The overall suicide rate in the general population is approximately 12 per 100,000 people in the United States, according to the Centers for Disease Control and Prevention (CDC, 2009, the latest year for which there are figures). However, the suicide rate for active duty personnel is about 30 per 100,000 (2012). This is a record rate for the military. It seems we are doing something very wrong, indeed.

The bleaker picture, though, is for veterans. Just after someone is discharged from service, their risk is at an all-time high. Young veterans (aged 18-24) who enrolled in a Veterans Administration’s (VA) health program died by suicide at a rate of 46 per 100,000 in 2009 and nearly 80 per 100,000 in 2011. That is over six times the risk of the general population; and while the risk of suicide in the general population has remained fairly steady over the last decade, the risk for veterans has been climbing. 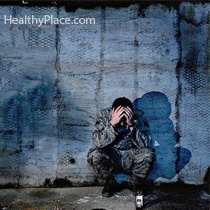 The above numbers don’t take into account which of those veterans have combat PTSD. While the link between suicide and combat PTSD, specifically, has not been shown (due to lack of study), the link between PTSD and suicide, in general, seems clear. Several studies have shown that those suffering from PTSD have an elevated risk of suicidal thoughts and actions. Some studies have shown that symptoms common to PTSD can predict a suicide attempt, such as:

It’s important to note that just because a veteran with combat PTSD has these symptoms it doesn’t mean they will attempt suicide, but it does indicate an elevated risk.

What Can We Do about the Suicide Rates among Veterans?

For veterans experiencing acute suicidal thoughts, a Veterans Crisis Line is available. Veterans and their loved ones can call 1-800-273-8255 and Press 1, chat online at http://www.veteranscrisisline.net/, or send a text message to 838255 to receive free, confidential support 24 hours a day, 7 days a week, 365 days a year, even if they are not registered with VA or enrolled in VA health care. More information on suicide prevention for veterans can be found here.

APA Reference
Croft, H. (2014, May 21). Suicides Rates Among Veterans Alarming – What Can We Do?, HealthyPlace. Retrieved on 2022, June 25 from https://www.healthyplace.com/blogs/understandingcombatptsd/2014/05/suicides-rates-veterans-alarming-what-do

PTSD is the response to a traumatic experience. The experience is enhanced when those who went to war return and act as nothing has changed in their lives. Discussing death and devastation is not culturally accepted especially when it happens far from home. The internal conflict rages until it becomes unbearable. Basic training gears you up for war. What brings you down? Nothing. Without a strong personal support group of people who care, then no one cares including the man who use to care. Restrepo is the movie to watch for some answers and a glimpse of being unprepared for your mission. http://www.nytimes.com/2010/06/20/movies/20restrepo.html?pagewanted=all&_r=0