There's a lot of initial confusion that can exist for a caregiver during a mental health crisis situation. In my case, the lack of support received from the first responders in that situation was eye-opening and left me confounded.

My name is Douglas Baker. I'm a former caregiver to a woman who suffers from schizoaffective disorder - my ex-wife. If you have been caring for a family member with a mental illness for a while, you probably can relate to my story. If you're just getting started, here's a heads-up.

Most of Us Are Uninformed About Mental Illness

Unfortunately, my experience with the mental health system is not all good. There actually was not much good. There were eventually good people who tried to help – nurses and therapists. I can remember one psychiatrist who actually listened to me once. Hopefully he listened more to my wife at the time, though that first psychiatrist was ignorant. Or maybe he was just tired. He nodded off consistently as we sat in his office, while she tried telling him about her horrifying delusions.

I truly believed from my observations that many nurses and psychiatrists were only there because it was a paying “job”. I often felt like I had to push to be heard and believed. It was like they looked at me, their faces expressionless, read the label on the file and instantly determined what the problem was and what had to be done - “Oh, another one of these cases!” Then they would just turn and walk away. God forbid they should take the time to explain anything to me, the husband, who was standing there devastated, clenching his hair between his fists in shock and frustration. 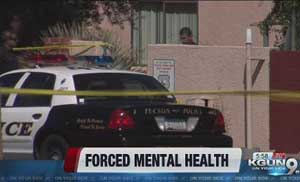 My wife’s schizoaffective disorder was very severe. The day I called 911 for the first time she’d been pacing around our apartment for hours. Her feet bled, she was talking to voices in her head and she was under a catatonic spell. I knew nothing of mental illness. I even thought I might be dealing with demon possession. I first called a Catholic Church to see if they performed exorcisms. No dice.

When I did call 911 and police arrived, they acted like I should be well aware of what was happening. I should know they were arresting her under the Mental Health Act. Why couldn’t a first responder look me in the eye and give me some idea what was happening instead of treating it like it was just another day at the office?

My experience all those years ago underlines why I have been thrilled lately to hear there are new programs taking shape in the UK and even one in the Canadian town next to where I lived and had very little initial support from mental health services fifteen years ago. These programs will see a mental health nurse attend mental health calls with police officers – imagine that! I certainly could have used that type of (hopefully) compassionate support; someone to give me some idea of what was going on in my time of crisis. All I can say is if it’s done properly, it will be a huge step in the right direction. And it’s about time.

Douglas W. Baker is a writer and human rights advocate in Toronto, Canada. Douglas recently created urbanFire13.com, as a platform for socially concerned artists and writers to display their work and just published his first Kindle eBook: Coercion or Care: Involuntary Treatment of the Mentally Ill. You can find him on Twitter at @dwbaker1971 or follow his blog.

The Stigma of Trichophagia - Eating Hair
Living with Rapid-Cycling Cyclothymia