Are you looking for an all-expense paid holiday in the mental health ward of your nearest hospital?

If that doesn’t sound like something that appeals to you, then I wouldn't make any changes to your mental health medications without your doctor's supervision.

So we came to the conclusion that she should stop taking the antipsychotic medication.

Consequences of Making Mental Health Medication Changes On Your Own 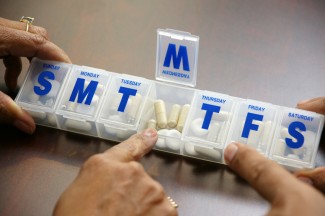 Four days later, she was admitted to a secure mental health ward. My beautiful wife was suddenly living in a world of psychosis for most of the day. Delusions and auditory hallucinations were normal for her. She was extremely paranoid and thought that everyone was plotting against her in some form. On top of this, she was experiencing wild mood swings. She moved from laughing to crying in minutes.

Twelve weeks later, despite massive doses of every antipsychotic known to medicine, she was no better. In complete and utter desperation, we turned to electroconvulsive therapy (ECT).

For her, this was the treatment. After the second round of ECT, the psychosis is 99% gone and her intense mood swings had decreased. Finally, we had hope. We could both see the sunshine rising over our future together again.

After ECT, We Were Able to Go Home

After 14 weeks, my wife is finally home and we have started rebuilding the damage this episode has had on her. While the psychosis is under control, the damage to her self-confidence and her self-esteem is not. It will take years of dedication and concentrated effort to restore these.

On top of this, we are also dealing with the memory loss issues from the ECT. The memory loss improves with time and effort, but it will always be an issue. (Side Effects of ECT)

We hope you read our story and learn from it. We are not doctors and should never have thought we were. Mental health medications are not something to play around with. They are serious drugs that have significant effects on the brain.

If you want to change your medication, only do it in consultation with your treating doctor.

Ian and Pauline Knabel are a husband and wife living with mental illness everyday. Pauline is diagnosed with schizoaffective disorder which, at times, throws a huge curve ball at them. They share their experiences to provide real life examples and help others understand that they are not alone in their struggle. They run a blog at www.QueenslandMentalHealth.com. You can find them on Facebook, Twitter, Pinterest, and Google+.

The issue of psychiatric medication indicates great problem in current psychiatric treatment and management of any mental disorder. Indeed, psychiatric patient and their family members are prone to interrupt medication one's own decision. This common undertaking of psychiatric patient introduces many bad complications for the course and outcome of concrete mental illness to respective patient. So, each mental health medication change should be under close supervision of clinical psychiatrist who treat and manage any psychiatric patient. Otherwise, we risk to face with hard and serious prognostic consequences, that worsen the satisfying treatment of respective mental illness. The same statement is value for schizoaffective disorder, as it is presented in above article.

Hi Emily
Thanks for stopping by and taking the time to comment.
I agree 100% with you about stopping cold turkey and we have certainly learned our lesson - never again.
Hope all is well for you and wish you an amazing week.
Cheers
Ian

Stopping an antipsychotic cold turkey is really likely to trigger rebound symptoms. This makes it really hard to get off of meds because the rebound effects can look like a relapse- and it can be impossible to tell the difference. But sometimes you can. Going off of Seroquel cold turkey made me hallucinate, something I don't normally do.