Using Meditation to Cope with ADHD

Many people don’t know this, but you can use meditation to cope with attention-deficit/hyperactivity disorder (ADHD). ADHD is defined as a neurological disorder which manifests itself in behavioural symptoms such as lack of concentration, impulsivity and hyperactivity. But for the people who live with the disorder, things can feel more complicated than this. It can be hard to know where personality ends and ADHD begins, and, as an “invisible illness,” people with ADHD can face judgement and accusations that they are simply making excuses for themselves. Coping with ADHD can be done through meditation, however.

The Challenges of ADHD

Attention-deficit/hyperactivity disorder can create big challenges for people in their everyday lives. Firstly, there’s the aforementioned prejudice that doesn’t see it as a “real” illness, resulting in a lack of understanding from other people that makes life more difficult for those with ADHD. Then there are the ADHD symptoms themselves. 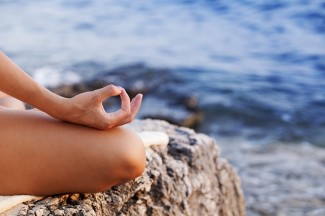 Having a short attention span and finding it difficult to resist your impulses can have major effects in school and the workplace (Adult ADHD Symptoms and Their Impact). This can make it hard for people with ADHD to achieve their goals, and it is also very frustrating for them when all they want to do is focus. Furthermore, by not being able to control their impulses, people with ADHD can find themselves in unfortunate, and even dangerous, situations.

With the feeling that there isn’t an “off” button in their brain, and that they are unable to do things as effectively as others can, people with ADHD can feel disheartened, annoyed with themselves and suffer from low self-esteem.

Meditation Can Help One to Cope with ADHD

Many people with ADHD feel like they would never be able to meditate, but in fact it can have significant positive effects. The calming effects and hormonal balance achieved by meditation are especially useful if someone is coping with ADHD, and it can form a key part of self-care.

By letting go of any previous ideas about meditation they may have had, people with ADHD can find it much more accessible. They don’t necessarily have to sit still, they can choose to focus on music or a mantra; and if they haven’t achieved an empty mind it doesn’t mean they have failed. Most people find their brain still chatting away during meditation, and it’s something that gets easier over time.

Meditation also improves self-confidence and reduces anxiety -- meaning that the judgements and misunderstandings of other people will have much less of a sting.

Of course, meditation cannot replace traditional, doctor-approved treatment. Rather, it should be used alongside the medical advice you receive as part of a holistic strategy, helping people effectively manage ADHD and thrive.

This piece was written by:

Holly Ashby is a writer who works for Will Williams Meditation, a meditation centre that aims to improve people's health and happiness through the practice of meditation, including meditation techniques for treating ADHD.

Understanding Your Addiction: Addiction Hijacks Your Brain
The Difference between Psychiatry and Social Work