(A Freak Of Nature, Born At A Time Prior To DNA Testing)

The only term that was known, as far as I was ever told, was that I was an Open Birth, meaning I had ambiguous genitalia, that I could not be identified by the people who examined me as either a male or a female. These people were a Catholic Sister and a Veterinarian, both in a small western town, dealing with a premature and abandoned miscarriage.

This was a condition ascribed to the youth and/or illness of my biological Mother at the time of my birth. In certain conversations discussing me, I had overheard this on various occasions. I recall that I was stripped naked many times and exhibited to other adults. As a small child, from age 2-4, I remember that I enjoyed being the center of attention and awe and speculation by adults.

The man I knew as Dad was, I believe, related to me. Whether he was, in fact, my biological parent is unknown. His sibling and a younger sister were suspected to be in an incestuous relationship. My genealogical research indicates that my genetic condition existed in the family. Two of three "brothers" immigrated from Germany and came to America. The youngest was listed as the "wife" of the older sibling on passports and ship manifests. German/Gypsy/Native American lineage, I have reason to believe, carried my rare DNA karyotype. Research is continuing at this time.

I am one of several types of true hermaphrodites. The XXXY (mosaic) karyotype is extremely rare. One theory of the cause of my own condition has a lot of support. It maintains that two ovum were produced simultaneously in my mother and the eggs fertilized independently as maternal twins. During gestation the eggs merge into a single fetus, one ova was destined as male the other as female.

My understanding is that sometimes both ova might well have been male XY or female XX, in which case the child would have both distinctive DNA chromosome karyotypes, a XY/XY or a XX/XX (mosaic).

These people would appear perfectly male or female unless some medical situation required a chromosome karyotyping. That is an unusual procedure. How many are like this is unknown, as few are tested. They, like me, would have two separate chromosome karyotypes, similar to Siamese Twins sharing one body to varying extents. It is also my understanding that present fertility drugs today may make this condition much more common. In my case, my karotype is XX/XY, hence I have characteristics of both male and female.

I was given a boy's name and a separate girl's name by my "Father" and his wife, my "Mother," with two birth certificates. Neither was recorded at the time, but awaited a future decision. Eventually, I was "recorded" later as a male, but called by an ambiguous nickname of a comic strip character, a child that no one knew what sex the child was, which was fitting (from Barney Google).

I was left "as is" awaiting further physical development. From the age of four to sixteen years old, I was sexually, physically and mentally abused by several members of my own family. Then I was able to stop the most invasive abuse by choosing to be a male, at age fifteen, accomplished by taking massive doses of testosterone to effect secondary male sexual characteristics. ( Deeper voice, body and facial hair, that allowed me to pass as a male.)

If you refer to the sexual abuse links, you may get some idea of the traumas caused by this abuse. The intersexual condition caused me to be abused by both "normal" sexes. Something seemed to drive others to experience their sexual fantasies, with me as the unwelcome recipient. Personally, all I derived was pain, frustration, and fear of failing to please those I was dependent on as a child. I suffered extreme feelings of guilt when I learned what these acts were.

Not all of my life was bad or sad. Many parts were humorous, as I kept my own sense of humor, much of which was due to my masquerade as a macho male, as I perceived and played that role in many all-male environments, ie: military, jails, and prison. I never succumbed to a male/male relationship, due to inhibitions and prior abuse by homophobic males. Actually, the only way I could even have a homosexual relationship would be to have sex with another like myself (not likely), so homophobia is not an issue with me.

In public, I have been, in all respects, a male heterosexual. And like many real males, I've felt woefully inadequate for much of that time. I had several advantages as a partner: insight, companionship, and
communication, and my own desire for lengthy foreplay.

Although inadequate, I was married for eighteen years to two "normal" women. However, when I revealed my condition (to the extent, I was aware of it), they reacted first with disbelief for a few years, then rejection, as they had homophobic reactions, social concerns with "their being bisexual," worries about themselves being gay. Both sought "normal" affairs while married, unable to accept me as is, and mostly unable to deal or cope with their own sexuality .

Having raised three children alone through pre-teen and teenage years (11 years), I can appreciate the problems of single parenting. With two girls, I discovered the bias and prejudices of a male dominated school system. With 90% of discretionary funds expended on male sports activities, I resented and fought the system on behalf of my daughters, and my son, feeling he too was being brainwashed into participating in aggressive sports.

No one that knows me could fault me on my parenting skills. The idea that a gay, lesbian or gender dysphoric person is unfit as a parent for "normal children" is ludicrous! My own children never knew my intimate identity, until a local laboratory gossip leaked my DNA tests results. The two oldest have not changed and support me, however, my youngest daughter (15) was teased at school and chose to go live in another state with my ex-wife. They are all heterosexual as far as I know, but perhaps they are more tolerant of others, having known, loved and respected me.

For those who want to know more about the strange disassociated life I led, and my own traumas, I can recommend a book, Herculine Barbin: Memoirs of a French Hermaphrodite. Herculine was raised as a female in convent surroundings. I felt the trauma and the emotions expressed in this book as my own. It is sad that there has been so little difference in public tolerance. Much has remained unchanged since 1838.

My own book "Masquerade," is being edited as I write this. Perhaps it will make a little difference in public attitudes, and assist some lost soul who feels like a lonely outcast, as I did, to perhaps accept themselves better and find out they're not alone. Hopefully, others can find acceptance and be themselves, live a productive life, beyond a sick social preoccupation with pseudo-gender differences, associated sex and hate crimes and stop the reactionary response habits to childhood traumas.

As you look through my site, I hope you'll think about these questions:

next: Intersexuality Frequently Asked Questions
~ all inside intersexuality articles
~ all articles on gender

APA Reference
Staff, H. (2007, August 9). About Me, HealthyPlace. Retrieved on 2022, July 3 from https://www.healthyplace.com/gender/inside-intersexuality/about-me 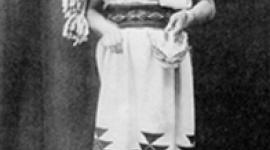 For Lesbian Parents: Coming Out To Your Children