Bipolar Disorder Genetics: From My Grandmother to Me 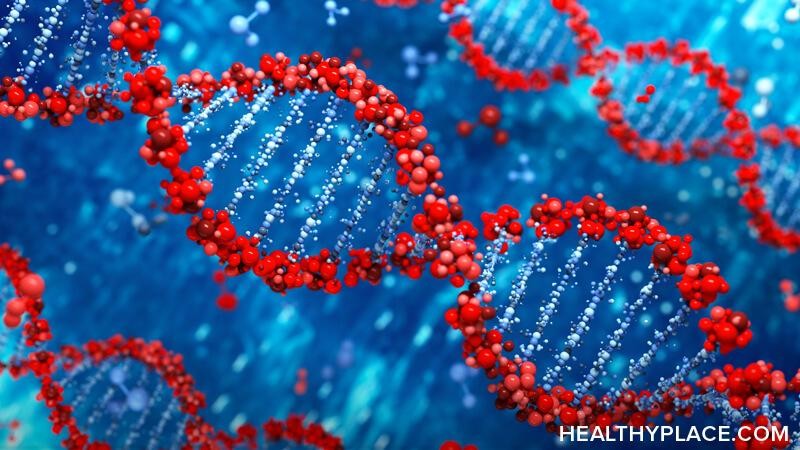 When diagnosed with bipolar 2 disorder, my doctor was curious as to who could have passed the bipolar gene down to me. In my immediate family, no one showed symptoms of bipolar disorder. Looking deeper into my family history, it became apparent that my grandmother had bipolar disorder. Her story made me think about the differences between what our lives are like living with bipolar.

My grandmother was born in the late 1920's, and I was born in 1989. We have the same mental health condition but in two completely different generations.

In 2017, we face bipolar stigma on a daily basis. I could not imagine what it must have been like for people living with bipolar disorder, depression or anxiety in the previous generations. It saddens me to know that my grandmother never once received treatment for bipolar disorder, and I cannot blame her.

Supposedly my grandmother was a brilliant woman with a vibrant personality but because she was unmedicated, the colorful part of her was eventually covered in darkness. It is a story that reminds me to be grateful and continue fighting against stigma for the next generation.

In this video, I explore the difference between my life with bipolar 2 disorder in 2017 and my grandmother's life with the same condition in the early to mid-1900's.

Is there someone in your family, born in a different generation, that lives with bipolar disorder? What challenges did they face that differ from the ones you face in present day? How do we reduce stigma for the next generation? Please share your experience below or do a response video and send it into info@ healthyplace.com. Thanks!

APA Reference
Blum, H. (2017, October 5). Bipolar Disorder Genetics: From My Grandmother to Me, HealthyPlace. Retrieved on 2023, January 30 from https://www.healthyplace.com/living-with-bipolar-blog/bipolar-disorder-genetics-from-my-grandmother-to-me

Scorpire
He might come back, just give it time. I know it's hard because I am going through it myself at the moment. This is the 8th time this same person has ghosted me. She has Bipolar 1 and it's very difficult to deal with, but I love her ETERNAL and that is why I always take her back into my life... when she is ready. It's very hard to handle being on the recieving end of it! You have to give them their space and time to heal. Hopefully he comes back... just wait and see. Keep busy in the meantime, it will help alot! :)

Bipolar Disorder and Ghosting: It's a Big Problem
l
So glad I found this page, it's like the support group and therapy i never had. I'm going thru the exact same thing, still grieving, still hurting. I wanna let go but can't. Part of me wants to be there with him, yet part of me feels like i trigger him. He's gone from the sweetest being to pushing me away overnight, and he's not coming back. Whilst I know it's for the better of me too, i still worry for him. Sadly he now treats strangers better than he does me. He responds and shows up for them but ghosts me. He knows it hurts me and continues doing so. I just wish i could let go
Bipolar Disorder and Ghosting: It's a Big Problem
Leigh
Hey, I know it hasn’t been that long but are things any better? It’s been almost 2 years now and I swear I can just think about it all at any given time and start sobbing.. grr I always look sad and scared now, because I am 😞 I never used to be scared or I could always force myself, I don’t know how to live again now life is just pain management and trying to be ok but I’m failing
Bipolar Disorder and Ghosting: It's a Big Problem
Katelee
I appreciate it, I couldn’t justify ghosting someone I lived with because it’s what I need at the time then set new unfair boundaries on a long term relationship. If I get into another relationship one day or ever cared about a person in anyway I couldn’t do that to someone knowing how painful it is. I just feel used and hurt all the time and it’s cost me everything I ever worked for as far as emotional growth, self worth, career, mental health.. I never imagined how low she would sink and now it’s like everything I knew about this person I thought was forever was a lie.. it’s such a horrible way to live.. you can empower ghosting and silent treatment all you want it’s selfish and manipulative.. but I’m not here to hate on you.. I just want to feel normal and not have ptsd and be able to move on from the hurt
Bipolar Disorder and Ghosting: It's a Big Problem
Moving Forward
I wake up every morning with anxiety when there is nothing to be anxious about? Sometimes I will get up at 3am in the morning and start reading a book to calm my nerves. After that I'm usually ok unless I have to present in front of people that day.
What is it Like Waking Up with Bipolar Disorder?
advertisement