The Future of Bipolar Treatment: What I Hope Will Change 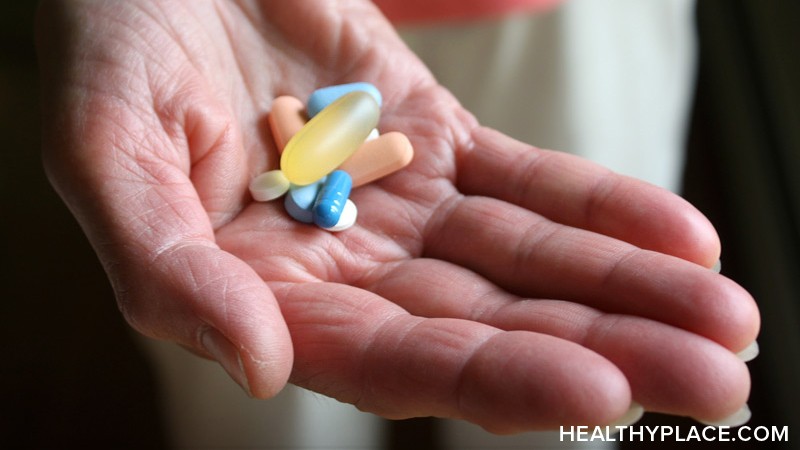 Receiving treatment for bipolar disorder is necessary, but there are many obstacles to overcome when finding the right regiment. For one, the side effects of bipolar medication are extreme. I've even considered quitting my medications for bipolar 2 disorder because of that.

Another problem is the process of finding a psychiatrist that considers your needs and wants can be exhausting. People often ask me, "Why is it so hard? Don't they just prescribe you the necessary medication to make you feel better?" No, it's not the way it works.

The future of bipolar treatment is unclear, but these are some of the changes that I hope medical professionals will consider addressing when the time comes.

Bipolar medication that causes excessive sedation is no fun for anyone. When I went to the mental hospital, I was so sedated I could not even see where I was walking. It made sense when I entered the hospital, but I was apprehensive when those particular medications were prescribed to me once I was released. (3 Reasons I Questioned Taking Bipolar Medication)

When I worked as a nanny and was still in the process of experimenting with finding the medications for bipolar for me, there were a couple of times I had to pull the car over with the children because I felt drowsy. There have been times where my family has seen my head and eyes rolling back and I was almost drooling like a baby.

It is true that there needs to be a sedative aspect to bipolar medication for many people, and I have been heavily sedated after a severe hypomanic episode. I do not question the methods of doctors or think their intentions are malicious; I fully admit that I could not live without them. I am very grateful for the resources they provide. However, not being able to move, communicate clearly with people or drive a car for a lengthy amount of time is far from well-balanced. It is not a form of stability, its a kind of silencing.

Open Communication Between Psychiatrist and Patient About Bipolar Treatment

One of the biggest problems I had when searching for treatment of bipolar 2 disorder was the lack of open communication between the psychiatrist and I. It got so bad at one point; I ran out of an office hysterical in tears. I told the psychiatrist, I didn't want to take medication that made me drowsy and wanted to feel "energized." She accused me of trying to persuade her to give me stimulants and threatened to report me.

Recently, I went to California for a workshop with other mental health advocates. We were asked to share what has helped us with managing our bipolar disorder. One woman praised her psychiatrist, and when asked what made this doctor different from the others, she answered: "She saw me!"

It had nothing to do with her psychiatrist's flexible schedule; it meant that the doctor listened with her mind, as much as she listened with her heart. Their open lines of communication helped the psychiatrist to understand how she defined happiness. It is necessary to increase awareness of the issues we face with bipolar treatment to better not only ourselves but those who work in mental health as well. As the woman from the advocacy workshop said, we need people to see us for who we are, not for what we have.

APA Reference
Blum, H. (2017, September 26). The Future of Bipolar Treatment: What I Hope Will Change, HealthyPlace. Retrieved on 2022, August 15 from https://www.healthyplace.com/living-with-bipolar-blog/the-future-of-bipolar-treatment-what-i-hope-will-change

A Natural Disaster. No Bipolar Medications. Crisis Time.
Experiencing Bipolar Stigma on a Daily Basis
Richard Gardner
February, 6 2019 at 10:42 am

1.) I want to see an emphasis on lifestyle changes ever medications. Diet and exercise are very important in controlling bipolar. Ten cups of coffee a day is not healthy. Neither is a day packed with sugar and sugar substituted foods such as sucralose and aspartame. 2.) i want the tag "disorder" dropped. Many of our most creative people are bipolar. Neurodiversity over disorder.

McHurty
I wonder about the cruel intentions stuff a lot too. Her best friends were only people who paid attention when she had drama, she loved being a part of these womens groups or support groups for whatever she self diagnosed, it’s so sick to be used by someone you truly love at such a difficult time and just left like you never mattered.. she accused me and acted like I was guilty set me up and lied over and over about things you just don’t lie about. It seems like a nightmare still when I think about it all and what it’s done to me. I’d give anything to feel normal again and have my life and piece of mind back. She stole things from me it took a lifetime to earn, she’s never had to work for a thing in her life… she’ll never understand how much damage her selfish cruelty does to people
Bipolar Disorder and Ghosting: It's a Big Problem
Blondedeadhead@sbcglobal.net
I just wanted to say ❤️ I love you thank you for sharing
Bipolar Disorder and Ghosting: It's a Big Problem
Felton
Some things will always hurt, it makes me feel so pathetic that even after knowing all I know now and how she used me and abused me I still miss her to death, not the real her but the her I loved and thought loved me
Bipolar Disorder and Ghosting: It's a Big Problem
Katie
If they ever did come back could anything ever really justify how they treated you? I’m still dealing with the reality of living with a sociopath that targeted me as a source of supply and knew before we ever got serious how she would leave me and hurt me in all the ways she was supposedly hurt, it’s messed up to think about… you live with a person and spend so much time together and realize they were lying to you every step of the way. They promise you everything you ever wanted only to dangle affection, promises and fake wanting a future when they know you are only temporary and they will eventually use everything you ever cherished or confided in them to hurt you as deeply as possible so they can say you’re crazy and somehow justify years of lies, secret phone numbers and emails and randevous, when you look back at all the things you never bothered to question it’s disgusting and just soul crushing to learn they lied and cheated and basically showed you proof… but I mean you have no reason to examine pics or look at the location or anything because you just trust them and never imaged a person could lie about who they are from day 1… she sent all these cute first trip alone pics I never even questioned we were just falling in love, now it’s obvious she was lying the things in the background guy behind her… it’s so mind boggling… another time visiting a friend you can literally see in locations she switched houses her clothes are thrown around the room and she’s under s blanket smiling…. Little did I know there’s s reflection of a guy clearly with his head under the blanket like wtf,,,, it makes my skin crawl. She never went to work snd would come home reeking if oil, so bad she had to scrub it off her naked body, I was such s fool to believe her but they are so insidious it all made sense at the time.. she didn’t even go there or to her doctors or moms most of the time she ran off to do go knows what.. she spied on me and smoked and did all these things I can’t even imagine her doing, even loud noises, she was terrified of them now I know it’s because her other pals had motorcycles and loud cars and she was probably afraid they showed up while I was home… I could go on and and but it’s all the same and all the Marc abuse stories run together… I never imagined the sweetness person I’d ever known would be the worst abuser and do more damage than anyone ever has or could to my life but here we are… ptsd sucks, love stinks, I’m going to bed
Bipolar Disorder and Ghosting: It's a Big Problem
HK
Thank you for sharing, I'm going through a similar thing with my BF. Although we've only been together a year and a half, it feels like a lifetime because of the highs and lows. He decided to ghost me last week, and it nearly killed me tbh. I don't feel like I can walk away tho, when I said I loved him and would be there I meant it. So I have decided to do a similar thing to you, just drop off a small gift and a positive 'thinking of you/I'm still here for you' type note. Its freaking hard tho, cos at the same time I have to move on and look after myself, and it feels like Im leaving my love behind. Mental illness is such a curse, being with him has taught me levels of empathy I never knew I was capable of. I just need to make sure to prioritise myself while supporting him. I have no idea wha the outcome will be, and living with that uncertainty is the hardest thing. I hope, and pray that we will be together, but have to face that fact that I don't control that. And still be true to myself and support him, because I know he's at the lowest ebb of his life.
Bipolar Disorder and Ghosting: It's a Big Problem
advertisement