Dear Diary,
My name is Sandra - Sani for short, and this is the first page of what I hope will be an interesting Diary for people to read. I'm married, live in England and have been suffering with the illness OCD (Obsessive Compulsive Disorder) for about the last 12 years, although actually I've probably had the Disorder all my life in one form or another, but not as seriously or life interfering. 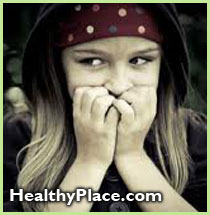 I remember as a child sometimes being frightened of things but not always knowing why. My friends would quite happily do things and go to places without any fear whilst I would sometimes be anxious or nervous. As a teenager, I went through a phase of turning light switches on and off again - hoping that nobody saw me! My mum did occasionally see this strange behavior, but OCD wasn't as well heard of then. When I was 19 several traumatic things happened in my life at about the same time, and these plus stress in my work, I believe, triggered the OCD more seriously. In my work, I sometimes had to work with some nasty chemicals and I became increasingly more afraid of them - to the point of having to wash & shower constantly before I'd feel clean of them - even if I had hardly been in contact with any of them! Eventually I had to give up my work. In the 12 years since, I have been living in what I have felt to be a very contaminated world, sometimes going for months without going out of the house - so strong was the fear. I think very often you have to reach rock bottom before you can rise up again, and I did!

The strain of living with the illness was affecting every part of my life - including my marriage! I was getting depressed and so was my husband. It was at this time that I started talking to someone regularly on a chatline. We would talk for hours, had loads in common, and I found this person to be one of those rare types of people in life: unselfish and wanting to do anything to help. Anyway, to cut a long, 12 month story short, this person gave me confidence and belief in myself, plus the motivation to believe that I could ACTUALLY get well! So, with this new found belief, I started along the path of trying to get free from this illness. I first went to a Doctor - I can't begin to tell you how frightening that first visit was, or how vulnerable I felt opening up my fruitcake mind to a stranger! I was referred to a Psychiatrist, a really nice man who put me at ease straight away, and a Psychologist who I expect I'll be having Behavior therapy with. I've been put on two types of drug, Fluoxatine (Prozac) and a different kind of antidepressant called Lofepramine. These two taken together seem to be helping and I'm on the waiting list for the Behavior Therapy.

In the meantime, I've been to visit the friend I was telling you about. I see my own home to be very contaminated - even just making a cup of tea is a very difficult task. However, my friend's house feels relatively uncontaminated and I guess that's partly because I'm not aware of the history of it, so I am able to wash dishes, cook, go in and out of rooms, and all kinds of stuff, all by myself for the first time in years and it feels GREAT!! I have been here for several weeks now and I love the freedom I feel I have. Whilst I'm here, my husband has started to change the environment at home so that hopefully it won't feel quite as contaminated to me when I go back. I guess you could say I'm doing some Behavior Therapy of my own! The mind is a very complex thing, isn't it? I spent all those years trying to keep my home contaminate free and all I ended up in doing was creating a prison in my own home for myself and my husband! Hopefully, though, there is a light at the end of what has been a very long and dark tunnel.

I shall update this regularly to let you know how I'm doing. I know how isolating this illness can be, so I just want to say, to anyone reading this who has OCD, you're not alone! There are millions of us out there, and you can get well. At least well enough to function freely and with some normality in the world again - DON'T EVER GIVE UP HOPE! I know how easy it is to do so and to feel that maybe life isn't worth it, but please believe me, it is. Thanks for reading and drop by each month to read update's. Oh! and please visit the other pages on my site!

OCD and Depression, OCD and Anxiety, OCD and ADHD