Renaming ADHD - What's in a Name? 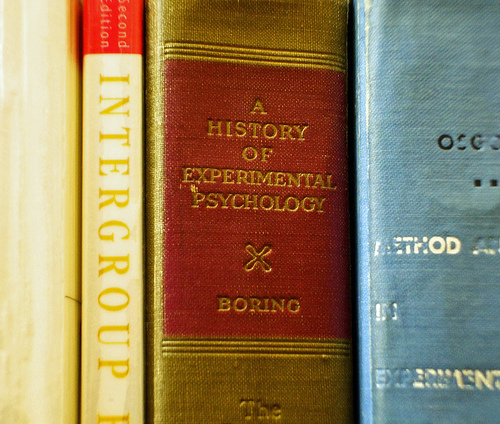 ADHD has a long history of not quite fitting in with the cool kids of psychology like depression, delusional parasitosis, and the Oedipus complex. The problem has been that no one has been certain what its criteria were. Now there's talk of a new name. What does it all mean?

In 1798, Dr Alexander Crichton, royal physician to the tsar of Russia and famous collector of foreign minerals as well as books with very long names, wrote of children who were "incapable of attending with constancy to any one object of attention." He labeled this Mental Restlessness Disorder.

One hundred and four years later, Sir George Still identified cases of impulsive children in England and labeled them with a disorder known as Defect of Moral Control. There may have been cases identified prior to this time, but the physicians likely had Mental Restlessness Disorder and never got around to transcribing their notes off of napkins and the backs of tavern receipts.

In the Roaring 20s, fidgety kids who couldn't sit still long enough to transcribe Huckleberry Finn into cursive were labeled with Post-Encephalitic Behavior Disorder, apparently because they behaved poorly after their brain stems were inflamed. Instead of cold compresses, however, psychiatrists soon began administering amphetamines to the rowdy kids with some degree of success. By the late 1930s, the term "hyperkinesis" had crept into the vernacular to describe the condition - which was then defined as hyperkinetic impulse disorder.

Minimal Brain Dysfunction became all the rage in the 1960s to describe the condition, but Hyperkinesis won out, most likely because it was already in use, described the condition more accurately, and parents threatened to give the the psychiatrists a wedgie if MBD was ever used in their presence again.

Several revisions later, we have the DSM-IV, published in 1994, which states a patient must have demonstrated at least six out of nine symptoms of inattention, hyperactivity, and/or impulsivity prior to age seven in order to be diagnosed with attention deficit and hyperactivity disorder (AD/HD). Or is it Attention Deficit Hyperactive Disorder (ADHD)?

There is some degree of confusion over whether to include the slash or not. Battle lines have been drawn across the Internet and on couches around America. I, myself, have had a Twitter rumble over the subject. There was blood drawn. I was even blocked. I know. It was serious. Most people leave off the slash because it's easier to type, but is it the correct thing to do? Thankfully, there will be a DSM-V in 2013 which will part the contentious sea of confusion and lead us all to a promised land of unified labeling.

Then I read about the DSM-V, that the label ADHD or ADD may even go away, or at the very least, change meaning." Now what will we fight over?

Fears of a new version of Minimal Brain Disorder aside, there will be some benefits to clarifying the criteria, especially since hyperactivity is not found in all children with ADHD. Still, concerns of the age of onset or reducing the amount of criteria to qualify for the ADHD diagnosis don't address some major flaws with the existing criteria—namely that attention deficit isn't exactly the problem. Or the fact that there is no mention of impulsivity or hyper focus in the description.

It seems that the name they use will once again fail to explain what the disorder is all about, leaving the field open for critics to condemn the disorder by its vague label as they've been doing for decades. With that in mind, may I make a few name suggestions?

Perhaps Variable Attention Disorder might be more descriptive. Or maybe Attention inconsistency disorder? Focus impulse disorder? Attention disaster disorder with wiggles? This is harder than it looks. It's a good thing they've got another three years to work it all out.

As far as I've seen, ADHD (or ADD or AD/HD or AC/DC, or whichever the reader prefers) is about as limited to being "hyper" as depression is to being "sad." They seem not to focus much on the other physical sides of these things. I wonder if that's what causes part of the stigma. I think that on some level there's always the thought that if you were just hyper or sad, you could snap out of it with willpower. Nobody expects you to "just focus harder" when the electrical activity in your brain is different, or your neurotransmitters are unbalanced.
I have never yet heard someone say "deal with it" to someone having an epileptic seizure.
(Of course, at the risk of ruining the drama of that statement, I honestly haven't really heard anyone say much at all to someone having a seizure of any kind. ...Still, though. I'm fairly sure they wouldn't say that. That would be mean. And depending on the type of seizure, an epileptic would be able to punch them after with a good cover story.)

I personally do not like that (as you mentioned) the label ADHD does not take into consideration those individuals that don't have hyperactivity (other than the additional labels of types.) My son, for example, has ADHD without hyperactivity and the minute you tell people that, they brace themselves, expecting a tornado-of-a-child. Quite the opposite is true with him. I don't even tell people about it anymore because I don't want the stigma attached to him. He's a well behaved child that can't focus. He's not the stereotypical ADHD child.

@Jen You’re not the only parent I’ve encountered who worries about the stigma and keeps their child’s ADHD secret from others yet deals with it at home. It’s a shame that some school systems are so hamfisted about these children that they scare parents like yourself into these tactics. I completely relate with you in this regard. In Utah, the pressure to medicate children for ADHD was so bad that they passed a law preventing schools from bringing the issue up anymore. (That has it’s own downsides). Not a perfect world, but we keep trying.
Thanks for commenting.

Very interesting and informative -- thanks for doing the research! Personally, as a professional organizer who specializes in helping adults with ADD (my clients often don't have the hyperactive component), I fall into the "it's a difference, not a disorder" camp. I think the problem is more with our cultural expectations; as you remind USANA, ADDers have lots going for them -- creativity, intelligence, a great sense of humor, excellent problem-solving skills... and, in my experience, big hearts.

@Claire In my experience, having a big heart was low on the list of job qualifications, usually 10 or so bullet points after punctuality. However, I agree with you on the difference vs. disorder terminology. I was just using the terms that the professionals use. But what do I know? I could never be punctual, so I never got around to finding out what any of the other bullet points were.

@Soozcat Regrettably, Microsoft already has a disorder named that.

ADHD is more complicated than I thought. I never knew it was like that.
I feel bad for my friend now who has ADHD.

I had no idea that ADHD had such a long and complicated history.

@Christy I didn’t either! It was very educational for me to do this article. Hopefully, others find it informative.
@USANA Every hair on the back of my neck stands on end and screams “Spammer!” but I could be wrong. Don’t feel too bad for your friend. They’ve got lots of things going for them because of ADHD. Boundless energy, non-stop entertainment, high credit card bills. Give ‘em a hug, or a banana—but not like the one in your username.