Sometimes the ADHD mind strikes when you least expect it. All you want to do is look cool to your friends and then your mouth gets a crossed message from the hypersillymus, a part of the brain I just made up. Next thing you know, you've opened your mouth and stated the stupidest thing since a young Dutch boy standing near a moistened wall told a passing schoolmate to pull his finger. Good thing your friends know how to have a good laugh.

Is Embarrassing Yourself an Adult ADHD Symptom? 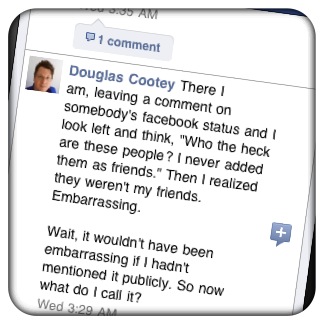 There I was, leaving a comment on somebody's Facebook status when I looked at the left pane and thought, "Who the heck are these people? I never added them as friends." Then I realized they weren't my friends. I was on somebody else's Facebook page. Embarrassing.

Of course, it wouldn't have been truly embarrassing if I hadn't thought to share it as a status update so my friends could have a giggle. I type silly things about myself all the time, but this time I outdid myself. I posted the status update on somebody else's wall…

Fortunately, that somebody was a real friend as opposed to an online friend. He had a good laugh and just chalked it up to me being up too late. It occurred to me that the situation could have turned out differently. It certainly had before. Ten years ago, I didn't know what I know now. I wasn't as discerning about the people I interacted with. I seemed to be surrounded by judgmental people with no sense of humor. If I made a mistake, I was likely to be greeted by wrinkled noses and furrowed eyebrows. I was almost guaranteed to find myself ostracized from the group again.

Something about many ADHD adults gives them a whoppingly bad social compass. They couldn't find their way from one end of a party to the other without offending the host, the host's mother, the guests, and the caterer. It's a true talent. You don't think it could be the ADHD, could it? Nah.

Well, I never did find the secret to navigating parties, but I did learn three very important lessons:

I realized long ago that I might as well get used to making mistakes. It seemed to be the only talent I had. And it wouldn't hurt to like myself a little more than I did—maybe even laugh at myself instead of getting angry for messing up again. It's not that I suddenly decided I didn't have to be responsible, but given a choice between apologizing and having somebody dislike me or apologizing, finding the humor in the goof, and still having somebody dislike me, the choice was pretty clear. I can't do anything about what others think of me, but I can do everything about how I think about myself.

Well, that and maybe I won't be using Facebook so casually at bedtime again. Who knows what I'll write next time?

Once I accidentally sent a pretty personal text message that was meant for a friend's eyes to TWITTER! That was embarrassing too. Luckily I deleted it before anyone @tted me about it
;)
Love,
Bri'anna

How do I stop myself making social gaffes?...
Ever since I can remember there have been occasions when I’ve stated inappropriate things. Once, at a social function in front of many others, I swore at my husband’s boss. I’ve been rude on the phone and face-to-face. I’ve made unkind comments to friends before I’ve really had time to think about what I was saying. Sometimes I did it to raise a laugh or to seem witty. Other times, I do not know why I did it. I’m sure (or at least I’m guessing) that everyone at some point has done similar things and regretted it afterwards but I can think of a whole catalogue of verbal disasters that frankly now make me cringe.
Recently I’ve starting obsessing about it. Suddenly one of my past faux pas will pop into my mind and then I will constantly fret about it, wondering if the person I upset or insulted will remember and is still saying, “Do you remember that time when Jane said…?” This is no longer just a casual thought about my verbal indiscretions crossing my mind. It sends me into a blue mood for a good while and I feel physically sick, tearful and truly upset. It’s beginning to affect my days quite seriously; these thoughts are constantly in the back of my mind and when they come to the fore, I’m quite distressed and spend a lot of time on “what if” scenarios. I know it’s pointless but I don’t know how to quiet my mind.
I know it is a silly idea but I’ve considered contacting all the people I can remember being rude to and apologizing, but what if some of them have forgotten and think I’m even more peculiar bringing it up? It never used to worry me what people thought of me and that is probably why I got into this pickle, but suddenly it really does matter and I’m getting myself in a state about it.
Your words of wisdom would be gratefully heard! Jane

Jane,
I'm not sure how I missed your comment before. You raise some excellent questions. I'll dedicate a blog post to my reply for next week or the one after.
Douglas

I've done that. Super embarrassing. I, too, was quick on the draw and deleted the offending message before anybody saw it.
I once had a cheeky comment about a family member saved in a draft for my blog (it was just a placeholder for later editing) that I accidentally published. It was up for a few hours, but luckily I dodged that bullet. Phew.

Once I accidentally sent a pretty personal text message that was meant for a friend's eyes to TWITTER! That was embarrassing too. Luckily I deleted it before anyone @tted me about it
;)
Love,
Bri'anna

ADHD and Intensity - 6 Tips for Damage Control
Adult ADHD
ADHD Adults: Ways to Talk to Yourself but Not Be Committed
Adult ADHD
3 Tips to Channel ADHD Hyperfocus
Adult ADHD
7 Steps to Inbox Zero for the ADHD Mind
Adult ADHD
Adult ADHD: Cover That Mouth Before You Use It!
Adult ADHD
ADHD and Low Self-Esteem: Being Criticized and Believing It
Adult ADHD