Are you doing everything you can to fight off the effects of adult ADHD? Is it possible you have more fight in you than you realize? 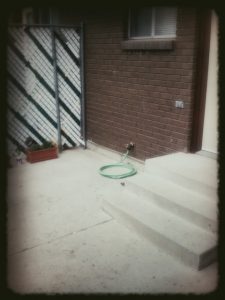 As some of my regular readers know, I have comorbid conditions of ADHD, Depression, and Chronic Motor Tic Disorder. Although I manage my depression quite well with only occasional death matches with the Black Dog, and my ADHD is a somewhat manageable functional dysfunction, I haven't fared so well with the tic disorder.

Sometimes the tics are flailing, violent things; sometimes they are clenching, curling things. Other times, they are all of the above. I usually have a cane on hand to hobble about during bad spells, but there are those days where I have to have two forearm crutches to get around. Memorial Day was one of those days.

And yet, I had determined that Memorial Day was to be THE DAY that the patio would be excavated from the mess it was buried under. It was one of those "As God as my witness"—shaking my fist at the heavens—framed by lightning—sort of determinations. I didn't have time to be disabled. So I braced myself with my crutches and supervised my girls cleaning efforts while I twitched and wobbled like jell-o on a stick. I even pitched in where I could. My girls were not happy campers, but I prevailed against complaining and glaring and angry sighing, and vanquished the messy foe, returning our patio to its empty and open glory again.

Overcoming ADHD with a Passion

Later that evening, I peeked out the window and sighed in satisfaction at the tidy patio and then mused on how hard I had to work to get all that accomplished. Then I wondered, "Do I ever work that hard to overcome ADHD?" It was a fair question. Do I ever work my hands sore on virtual crutches and cramp my virtual muscles to meet a goal despite my ADHD?

As most of you officially begin your week, I invite you to take a moment during your commute or mad dash from here to there to ask yourself this same question. How hard do you work to overcome your ADHD, and could you do more? Sometimes we resign ourselves to the way things are. We grow accustomed to dysfunction and carry it about on our necks instead of working around it.

My determination and focus took me by surprise yesterday. I sure would love to apply the same passion to the other projects in my life. Maybe I can accomplish more than I give myself credit for. Maybe there are some areas in my life where ADHD is a being treated like a wall instead of the hurdle that it is. How about you?

SpongeBob SquarePants Makes Kiddies ADHD?
Adult ADHD
Adult ADHD and Inaccurate Self-Observation: No One Likes Me
Adult ADHD
How to Work with Your ADHD to Complete Your Projects
Adult ADHD
ADHD: The Hyper-Focused or Zoning Out Coin Flip
Adult ADHD
3 Tips to Channel ADHD Hyperfocus
Adult ADHD
ADHD Frustration and Road Rage: Get Out of My Way!
Adult ADHD