ADHD Goofs: Stand Up and Take a Bow

Take a man with an ADHD brain on the fritz, deprive him of sleep, and put him on a diet. Then sit back and watch the show. 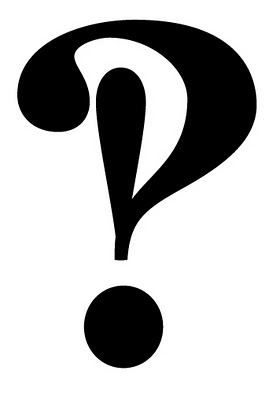 I had a business call to make early Monday morning. I had been trying to get in touch with this person for some time and I seemed to always call when she was out of the office. Her name was Claudia.

Say it with me. Claudia.

That's not such a hard name. It's not ethnic. It doesn't use phonetics alien to my tongue. It's not even spelled creatively like "K'lawd3ya". Just Claudia. Simple.

Yet when I called her office this morning to return her call, the conversation went like this.

"Really-long-business-name. May I help you?"

There was a very awkward silence. I had no idea who I was calling. I couldn't remember anymore. In the past, my first reaction used to be to hang up the phone in a hot flush of embarrassment. Years later I would fake a bad connection or a sudden interruption (Good Heavens, no! Don't put the nuclear waste there!! click). But now I'm at one with my goofiness. I take such things in stride.

"Wow, I can't remember the name of the person who I was supposed to call back. I'm sorry."

I had forgotten my ADHD phone tip: Always have the name of the business person you are calling written down in front of you. I laughed; she laughed. This was very important. I kept my voice cheerful and in control and described the nature of the business I was calling about.

"Is it Claudia you're trying to reach?"

"Yes! That's the name. You have saved my life." And I laughed again. She did, too. All was well. Being affable saved me from being humiliated.

If only that had been my one goof for the day. I'm afraid Monday wasn't finished having its way with me. 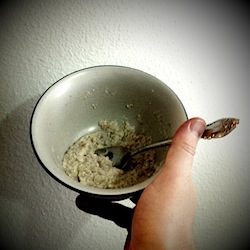 A half hour later I was eating my "power oatmeal" made with oatmeal, extra water, and vanilla protein powder. No sugar. (Yes, I'm on a diet.) Somehow I had convinced myself to eat the stuff, but it was so vile, or I had prepared it so terribly, that I could not believe the incredible gritty blandness of it—a textural assault of boringness to torture my palate. Forcing myself to eat it was a test of my commitment to the new food plan. I decided to take a picture of it and tweet the following:

This is what a goat vomits up after passing through a lumber yard.

But my tweet was nowhere to be found. How puzzling. Thirty minutes later somebody sent me an @. Apparently I had posted the picture AND comment to my blog, not Twitter. How embarrassing. There it was. "Vomit" in half inch tall type at the top of my blog with a picture of oatmeal. I screamed "Oh Noooo!" all the way down the stairs to the computer to erase my mistake with my eleven year old eagerly following along to see what Daddy had done wrong this time.

I have decided that the twelve pounds I have lost over the past week came not from my waist as intended, but from my brain. There really is no other explanation for it. Either that, or I didn't get enough sleep. Doesn't matter. Sometimes there's nothing that can be done when the ADHD mind pulls the rug out from under you. You just have to pick yourself up, dust yourself off, clean up the damage, and if you're cheeky, take a bow.

KUDOS, KUDOS, KUDOS: This is a very healthy attitude, at least to this adult 'brain is a many splenderous thing.' I hold a number of bio-engineering patents, play the whole art field, teach, have migraines, and go through what this gentleman goes through. The mind is what the brain does(okay, so neurology is my main field. I am my own best subject). Without a sense of humour I would be what is called 'anal retentive' in some psychiatric circles. I once was so into what I was doing, I forgot my own name. We quite often stigmatize ourselves because of an insecurity...we want to appear 'normal' which is usually the status quo of our peer group. Mircea Eliade, a french anthropologist, wrote on how epilepsy was incorporated into early eskimo/inuit communities. Because a seizure was so dramatic it was felt, by the community, that the individual was wrestling with unseen forces and coming out of such an event, meant that they were successful. They were thus placed in high regard and became the shaman. Watch the movie 'BLACK ROBE' and see the dwarf, again a shaman,(played by a long standing, wonderful actor)and one can see how often 'difference' was incorporated, given it's niche in a particular society. Having been a performance/cabaret artist in Europe for ten years has probably inured me to the position of 'outsider.' But again, within my social group, I was quite normal. The brain intends to survive. Thought often gets in the way, so I might suggest that one examines WHY they think a particular way that may only prove detrimental to the brain's primary goal. DOWTONg

I think the title of this post is maybe not intentionally, but could very well be encouraging stigma, kind of a sideshow mentality, hey lets watch the crazy guy for fun.........since it's written by the person with an illness, it's a bit different, but I just think we have to be really mindful of these things.
Take a man with an ADHD brain on the fritz, deprive him of sleep, and put him on a diet. Then sit back and watch the show.

Kate,
If we can't laugh at ourselves then how do we maintain positive self-esteem when we mess up all the time? Until I learned not to take myself and ADHD so seriously, I was miserable. But learning to laugh at my mistakes helped me heal. It's a method recommended by many ADHD professionals and therapists. My message to adults with ADHD who are struggling with liking themselves is, "Hey, we goof up. It's OK. Have a laugh."
Thanks for commenting and check out this video with commentary. The guest expert comments on my technique. You may find it of interest.
http://cdn.livestream.com/grid/LSPlayer.swf?channel=healthyplace&clip=pla_fa261df8-0ba3-4…

LOLOL o man ....I cannot any longer tell if this is my A.D.D. or slow forming
Alzheimers
lolll I DEAL with stupid brain farts all day long...but for the most part I laugh at myself.........cause Im not alone TY who ever did this .your a good soul.

Good attitude, Carolann! As they say, laughter is the best medicine. I mess up so often that I'm very healthy. ;)