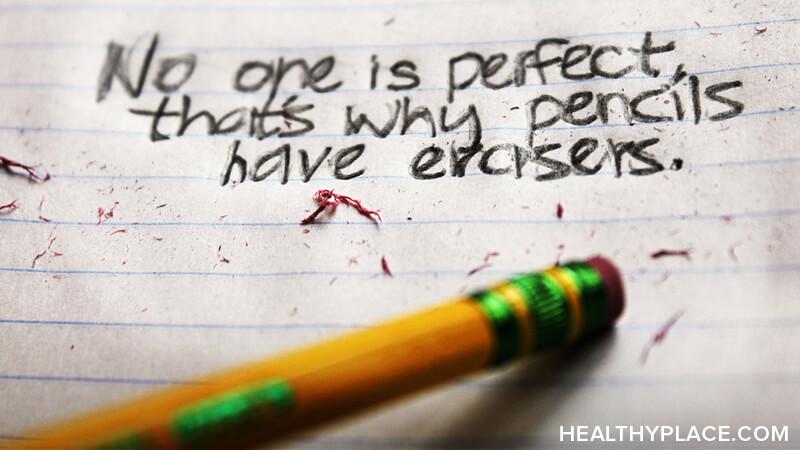 I've never considered myself a perfectionist. My handwriting is messy, and my closet is cluttered. I can't cook or draw. I sing off-key, and I can't visualize. As a flawed human being, I accept imperfection. Why, then, does my anxiety spike, and I feel as though I am to blame when things go wrong or when I perceive myself as having disappointed others?

Can I Accept My Imperfection While Believing that I Am to Blame?

In therapy, I am working through a trauma I suffered late last summer. I am doing eye movement desensitization and reprocessing (EMDR) therapy to help me reprocess that trauma and dispel the anxiety associated with it ("My Experience with EMDR Trauma Therapy").

My therapist had me repeat the exercise I described above using positive cognitions that I already believe or would like to believe about myself.

After honing in on a negative and positive cognition, my therapist asked me to recall three times in my life when I felt I was to blame: the earliest memory, the worst memory, and the most recent memory.

My earliest memory where I felt I was to blame was in the late '60s. I was five, playing with my older brother, who tossed a ball to me. It went over my head and broke a window. My old-school, worked-three-jobs-to-make-ends-meet father blamed us for being careless and took a rolled-up newspaper to us as punishment. This earliest negative memory of being blamed for what was an accident ingrained in me the core negative cognition of "I am to blame" that essentially informed the entirety of my life.

As it turns out, the worst memory where I believe I am to blame is also the most recent memory. It was the trauma of last year's illness that I believed I brought upon myself ("Understanding My Guilt and Shame Is Helping Me Heal").

After several EMDR sessions working on that first memory, I successfully reached the point where I now believe I was innocent. I mean, of course, I was innocent. I was five. We were children, and it was an accident.

Learning to Accept Being Imperfect

I began EMDR eight months ago. In that time, we've reprocessed my earliest memory and my worst/latest memory where I believed I was to blame. Thankfully, I now believe I am innocent of the illness that befell me. Hurrah.

Despite my work tackling my core negative belief, this past weekend, something completely benign occurred where the ugly beast of "I am to blame" reared its ugly head, and my anxiety was triggered. It wasn't bad, but it was there. The bad news is that my core negative belief is still easily activated. The good news is that I recognized it right away. I sat with it and thought about why I perceived myself as having burdened and disappointed my close friends, even though they repeatedly reassured me that what transpired was no big deal. Still, the anxiety was there. The added good news is that I was able to let it go much faster than I would have in the past.

I began writing this blog post the day after this happened, starting with "I've never considered myself a perfectionist." Today, I had a therapy session and told my therapist about my weekend experience, including the oh, so familiar feeling of "I am to blame." She observed that what may precede the belief of "I am to blame" is a belief that I need to be perfect and please everybody. I was amazed (with myself) that I had inadvertently come to the same conclusion days earlier. Progress feels good.

She proceeded by asking me which statement most resonates with me:

"I need to be perfect and please everybody."

"I need to be perfect to please everybody."

I chose the former: "I need to be perfect and please everybody." It fits. If I didn't believe this about myself, I wouldn't feel as though I am always to blame. I would feel comfortable knowing that sometimes things go wrong and that, as a flawed human being, I may make mistakes. And that's okay.

Managing Anxiety When Medical Tests Are Pending
Using the Physiological Sigh to Manage Anxiety
Heide
July, 13 2022 at 9:44 am