Effect of Gastric Sleeve Surgery: You Save A Ton Of Money 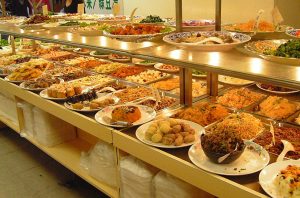 One unexpected effect from gastric sleeve surgery is that you end up saving a lot of money on food. You can order off of the appetizer menu at restaurants and still have leftovers. Get a regular portion and you will end up with food for days. I recently went to one of my favorite Indian restaurants and made six meals out of one dinner serving.

Grocery bills are cut drastically. I can make a meal out of a vending machine bag of chips. Which, in a tight spot, I've had to do. I don't recommend that because of the lack of nutritional value in said bag, but in a pinch, it's like having a super power.

Another unexpected effect of gastric sleeve surgery is that you're eating so little, you will most often need to eat four meals in order to make your calorie goal for the day. So you get to add an extra meal somewhere in your day. For a society that is so keen on the idea of three meals a day and anything more than that is pure self-indulgence, this just feels subversive and fun. I really enjoy eating my fourth meal.

Effects of Gastric Sleeve Surgery: You Are Useless At Buffets

This unexpected effect of gastric sleeve surgery really took me by surprise. It's common for someone who has had gastric surgery to go to a buffet and pile a plate high with food, only to sit down and realize they will barely be able to make a dent in their plate. It makes sense when you think about how long someone has been eating these portions of food, for most sleevers, their entire lives, then suddenly, they have a stomach that holds around eight ounces and there isn't any more room. It goes without saying that there are no seconds at the buffet after gastric sleeve surgery.

I try to avoid buffets as much as I can and all of my friends and family know it basically amounts to a huge waste of money for me to go one, but sometimes things are out of your control and you end up at one. I started taking one tiny portion and eating that, then going back for something else, just so I could space out my meal and I wouldn't be finished and itching to check my phone while everyone else is still eating.

The Biggest Unexpected Effect of Gastric Sleeve Surgery of All

So what's the most surprising unexpected effect of gastric sleeve surgery? Feeling completely full and satisfied on such a small amount of food. People have asked me if I feel deprived or longing as I watch other people eat more food than I do. But honestly, I don't. When I'm full, it's the exact same feeling as I would get before my surgery. And that I found really surprising.