How My Binge Eating Disorder Turned Into Anorexia 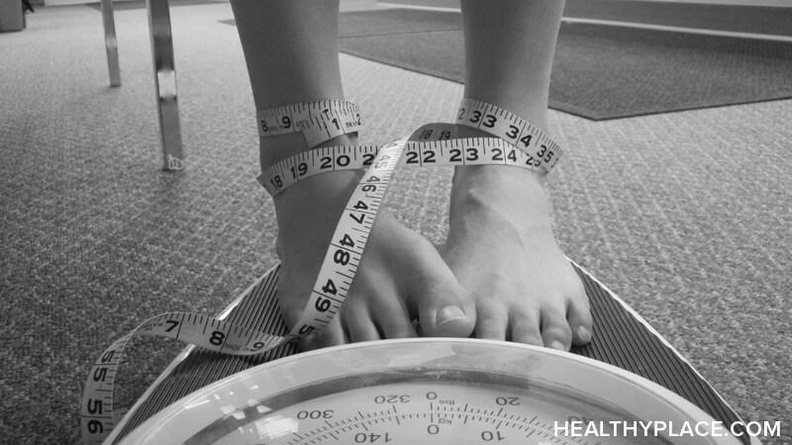 Binge eating disorder turned into anorexia for me. In fact, I have dealt with many different types of eating disorders. I have flipped from binging to restricting to purging--and repeated the cycle again. Just because we stay abstinent from one behavior, doesn't mean we are not picking up another in the process. The deep-rooted issues that were precursors to our eating disorders need to be dealt with in order to truly move on and find recovery from our illness.

As I stated above, my eating disorder has taken many different shapes, all of which were fueled by my low self-esteem and anxiety. My binging began when I was in high school. It came with me to college. About halfway through my studies, my behaviors took a dramatic turn.

I desperately wanted to stop binging and miraculously I did. I naively thought I was cured. I had stopped the thing that I assumed was making my life miserable. I was thrilled that I wasn't overindulging with food, but little did I know I was beginning to restrict.

Because I never took care of the issues that fueled my eating disorder, I fell deep into anorexia. I became miserable again and was struck with the realization that I was as sick as ever. More years passed and my illness took on other faces. It wasn't until I entered eating disorder treatment and worked on myself that I began to let go of each behavior and find wellness.

Eating disorders are sneaky illnesses. They can change shape and form without us really even noticing. We may think we are getting better when in reality we have just switched our behaviors. This means we need to be extra aware of our actions, as well as what is happening in our systems.

With my story, for example, I really thought I was doing great by not binging but slowly it only lead me to eat less and less, leaving me in the same state that I was in before. What we need to do is take care of what is going on below the iceberg.

Our behaviors are at the top of the iceberg. The iceberg in the water below represents the issues we really need to heal from. If we melt down the layers at the bottom of the iceberg we can have a real shot at wellness. If we don't do this, our cycle will only continue and will most likely become worse than ever.

Keep tabs on what is going on internally and externally with yourself. Journal, talk to others and do your best to be aware of what face your eating disorder decides to put on from day to day.

You can do this. Recovery is possible. With some work and a little faith, you too can reach wellness. Stay strong.

Grace Bialka is a dance teacher and blogger in the Chicago suburbs. She graduated with a BA in dance from Western Michigan University. Grace has lived with an eating disorder and depression since the age of 14. She began writing in hopes of spreading awareness about eating disorders and mental illness. She firmly believes in the healing power of movement. Find Grace on Twitter, Facebook, and her personal blog.

Eating Disorder Social Media Can Help Your Recovery
Going Back to the Basics of Binge Eating Recovery
Lauren
April, 23 2021 at 11:01 pm

Hi there,
Just wanted to say thank you for posting this. I think I am currently in this process - developing anorexia as I try to "cure" my BED. I've found that my inability to eat is often not taken seriously, which I attribute to still having an overweight appearance. I was searching to find someone with a similar story to mine, and found your article here and I just want you to know it's been really helpful to me. Knowing someone else has been through this gives me so much more courage to seek help, because I know that what I'm going through is legitimate.
Hope you are continuing to do well :)

Hey! Thank u for sharing your story with us! I hope you are doing better :)!
Right now, I am bingeing about 4times every week and I feel disgusted, terrible and incredibly guilty. Could you PLEASE tell me how did you stop bingeing and how did you start controlling your eating impulses? I am desperate... So can you please tell me?
Sorry if this is too personal and for being annoying

I too have suffered from an eating disorder (binge eating/restricting) and depression for over 20 years. I’ve also had diabetes, failing kidney, dialysis, 2 transplants, ADHD and a son with serious behavioral issues, I hope to find recovery in my near future. It all has just beaten me down and makes living exhausting,