Dealing with Stress by Looking for Humor

Like it or not, stress is a part of life. Sadly, too much stress can cause a person with borderline personality disorder (BPD) to suffer from psychiatric symptoms. For example, after a death in the family and a close friend moving away (which happened within days of each other), I wrestled with self-harm urges. But there are ways to deal with stress and the BPD symptoms it causes. One such way is looking for humor--either in the situation or from outside sources.

Humor in the situation 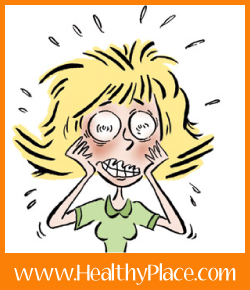 You know how they say "Someday you'll look back on this and laugh"? I was in a situation once where it was funny at the time, and still is funny.

It was the middle of a fierce Midwestern winter. My heater started to die--I was wearing my jacket in the apartment because it was so cold. One day the heater finally bit the dust. Unfortunately, the apartment below mine was empty, and this plus my lack of heat caused my water pipes to freeze. On top of that, my smoke detector wasn't working. Three big problems, all at once.

I called my parents to come get me because the apartment was uninhabitable. My father, despite my assurances the heater was broken, attempted to fix it: smoke gushed out. I blurted out a four-letter word and immediately put out the fire. My parents realized I wasn't exaggerating my troubles and agreed to let me stay with them until things got fixed. On the way to their house, we stopped for lunch at a Chinese restaurant. I opened my fortune cookie and started laughing, then showed the fortune to my parents.

It said "Do not let unexpected events 'throw' you."

Humor from outside sources

Sometimes it helps to turn to outside sources to find humor. Movies are one such outlet. I highly recommend the movie Clue, which was just released on Blu-Ray. You'll either love or hate it, but I can always count on it for a good laugh. If Clue isn't your cup of tea, try anything with the Simpsons, the Shrek series, the Muppets, or anything by Mel Brooks. The important thing is to find what you think is funny.

Another source of outside humor is books, especially comic books like The Simpsons. Books based on comic strips such as Garfield can also be a help. Again, you have to find what you think is funny, and what's funny to me may not be funny to you.

Why humor is important

Humor is an important tool to deal with life's stresses. You may ask "Why is it important?" It's important because it can save you from a severe depression and buy time until you can get help. It's hard to stay depressed or suicidal when you're laughing. Humor also helps us deal with unpleasant situations. A sense of humor can be a powerful coping skill. And coping skills are vital to dealing with symptoms of BPD.

APA Reference
Oberg, B. (2012, August 21). Dealing with Stress by Looking for Humor, HealthyPlace. Retrieved on 2022, October 3 from https://www.healthyplace.com/blogs/borderline/2012/08/dealing-with-stress-by-looking-for-humor

Advice to a Young Psychiatrist About BPD
The Ballad of Brandon J. Raub
cindyaka
August, 22 2012 at 7:03 am

Hi Becky:) My husband suffers from depression and I am bipolar. We joke about different things on a fairly regular basis, it truly lifts the spirits. We also joke that we've managed to not be sick at the same time.