The Ballad of Brandon J. Raub

It took me a couple of days to get the guts to write this column, both because of my experiences with involuntary commitment and the case of former Marine, Brandon J. Raub.

If you don't know who Raub is, Google him. Raub, who served in both Afghanistan and Iraq, has a Facebook page. Several of his posts are critical of the government; he believes the government was responsible for 9/11. One post included a lyric from "Bring Me Down" by Swollen Members ("Sharpen my axe, I'm here to sever heads") and another contained a vague line about an upcoming revolution ("The revolution will come for me. Men will be at my door soon to pick me up to lead it.")

Well, men did indeed show up at Raub's door--the FBI and Secret Service, with an order for emergency psychiatric commitment. A cooperative Raub was handcuffed and taken away, without being read his rights (you can see the video on YouTube). The police questioned him about his Facebook posts, which the feds described as "terrorist", then obtained an order for a 30-day commitment at a Veteran's Affairs hospital. He is being evaluated for post-traumatic stress disorder. He has not been charged with a crime.

Why Raub's Detention is Wrong

Raub's case raises questions about how the government can abuse involuntary commitments. 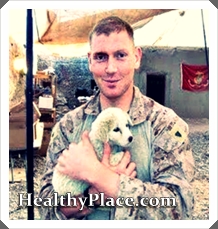 First of all, it doesn't take 30 days to diagnose post-traumatic stress disorder or homicidal ideation. This could have easily been done in one interview with a psychiatric professional. I've seen Raub's Facebook page; other than the easily-explained "sever heads" comment, there's nothing alarming. His political beliefs are pretty much fringe Libertarian. If Raub's a danger, so are his supporters who are making the same comments.

I remember when I threatened to commit suicide by cop in the federal building. The FBI was notified. I was never questioned, in spite of the fact the psychiatrist wanted me to face intimidation charges. I was specific; Raub was vague at best. Why the difference?

Second of all, Raub was questioned about his personal beliefs, some of which had nothing to do with mental health status. (I remember being asked "Why does the government require a marriage license?" as part of my evaluation.) The United Nations states that "a determination of mental illness shall never be made on the basis of political, economic or social status, or membership of a cultural, racial, or religious group, or any other reason not directly relevant to mental health status." (UN resolution 46/119 of December 17, 1991, entitled “Principles for the Protection of Persons with Mental Illness and the Improvement of Mental Health Care.”)

Finally, Raub was judged based on his writings. Where do we draw the line between free speech and evaluation-worthy speech? If he's made terrorist threats, that's a crime--charge him if that's the case. But if he's simply ranting on Facebook while having a few possibly delusional ideas, that's his right. Involuntary commitment should be used only to protect people who are an imminent threat to others. It should not be a political or anti-terrorism tool like it was in the Soviet Union.

If Raub's experience is anything like mine, here's what he can expect.

He will have limited legal counsel. I was represented by a public defender who talked to me on the phone for ten minutes the day before the hearing, then met me at the court hearing. I had no time to prepare a defense and no time to prepare to cross-examine the state's witness.

He will not be notified of future commitment hearings. I never am, and it's been nearly four years since the commitment. I no longer need it, but that doesn't matter since I can't argue it in court. I'm always notified that the order has been extended after the annual review has happened.

He will face a heavily biased court. The psychiatrist's word will be worth more than his, his reluctance to seek voluntary treatment will be evidence of a need for involuntary treatment, and he won't know what the evidence is until it's presented. I remember a state psychiatrist telling the unit director "I could get a regular commitment on you" when asked if there was enough evidence for one.

So how is all this "due process"?

Raub's lawyer said "For government officials to not only arrest Brandon Raub for doing nothing more than exercising his First Amendment rights but to actually force him to undergo psychological evaluations and detain him against his will goes against every constitutional principle this country was founded upon." Raub's case should be cause to look at involuntary commitment laws and their applications. Reform is needed. It's just a shame that it takes something like this to bring it to the public eye.

Dealing with Stress by Looking for Humor
Co-Morbidity: Borderline Personality Disorder and Depression