Today, at AA, we were reading a story from the Big Book. The part that jumped out to me was this:

"It was here that I realized for the first time that as a practicing alcoholic, I had no rights. Society can do anything it chooses to do with me when I am drunk, and I can't lift a finger to stop it, for I forfeit my rights through the simple expedient of becoming a menace to myself and to the people around me."

It made me think about AA sayings that apply to people with borderline personality disorder (BPD).

Saying One: Jails, Institutions or Death 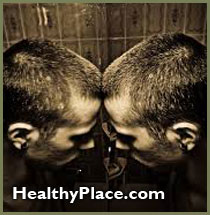 "We found that there is substantial empirical evidence that BPD is over-represented in prison populations," reads an article on the National Institutes of Health website. "[Studies] suggest that approximately 25 to 50 percent of prisoners suffer from BPD."

And our suicide rate? It's not good. Five to ten percent of us die from suicide, and the number doubles when only self-injurers are included, according to DBTSelfHelp.com.

HOW does treatment work? It works when you have the three principles of HOW: honesty, open-mindedness and willingness.

In order for treatment to work, whether it's dialectical behavioral therapy (DBT) or schema therapy, you have to be honest with yourself and with your therapist. This doesn't come easy for us due to extreme sensitivity--it's easy for us to think we're bad people. But we're not bad people; it is our reactions that are bad. How do we know if our reaction is bad? By whether or not it helps us. As we said in the Army, "If it's stupid but it works, it isn't stupid."

We also need willingness. All the help in the world won't do us a bit of good if we're not willing to put what we learn into practice. We have to be willing to work our programs.

We're most likely to relapse, be it with alcohol or negative coping skills, when we're hungry, angry, lonely or tired. One on its own is a challenge. More than one makes relapse a near certainty. Avoiding HALT is a basic way to keep yourself sane.

Don't get too hungry. Eat a healthy meal at mealtimes. Remember that nutrition can influence the way to think.

Don't get too lonely. Don't isolate from humanity. Do your best to be around other people who love and support you. Don't stop looking for support until you find it!

Don't get too tired. Get an adequate amount of sleep each night and remember that lack of sleep can make you psychotic. Rest is important!

This doesn't mean that BPD can be treated by these simple sayings. But it does mean that keeping these in mind can help.

What To Do When Waiting for Mental Health Services
How Therapy Is Like Pushing a Boulder
Rachel
October, 31 2020 at 1:36 am

I agree twelve steps for borderline disorder would be so valuable

I was sober from 1981 to 2009. I worked the steps to the best of my ability and had a measure of success. I can honestly say that I thought there was something "wrong" with me until I understood (for the first time) the dangerous dance that relationships bring to the sobriety table... as it were.
The something "wrong" with me turned out not to be alcoholism - at present anyway - but my actual view of the world and the mechanics of human relationships. I was with (married to and had children with) a very sick and disturbed woman who delighted in ruining my world on a daily basis. Transference is a very common phenomon in that co-dependants and socio/physcho/borderline often dance to the death taking everyone down with it. I stopped all dating, relationships etc and took time off and without any 12 step meetings at all for the last six months. My brain chemistry is appropriate now to a "normal" mans. I don't have a problem with alcohol anymore, for once I can take or leave it. No more highs and lows no more exccesive anything. Life is just good and for the first time in my life I am content, not happy just content with who I am and what I am.
As a man gone my own way, I have had a tremendous journey of self discovery. MGTOW saved my life........ I could never go back to gynocentric AA. It makes me sick to think about all the untreated social workers "helping". The worst advice I have ever gotten in my life came from AA and IT'S minions. Please go your own way and stop the blame game. Look in the mirror and you'll see part of the problem.
Davez

Dave, thank you so much for your comment. I did not write the article to which you are responding, but I relate. I am both a borderline and a recovering alcoholic. The two don't mix well at all. I'm so glad you have found what works for you. Reading your response, I felt very much at peace. You definitely aren't blaming anyone for your pain. That is so vitally important. AA has helped me in times of need, and I know it helps many others. There are those of us who benefit more from different therapies or activities. Can you tell me more about MGTOW? I don't know anything about that.

I am in midlife and just understanding I am bpd after it reeked enormous havoc on my life. All the earmarks are there. I am currently in counseling,going to groups, and AA/NA... Counselor says I have the big four.. Haven't asked exactly what that means , am a bit afraid to. The real issue for me is the 12 step program .. No secrets , total honesty, do the steps,etc etc.. Thing is for a borderline , myself in particular I find this all so difficult for someone totally pissed off at everything , every comment taken as a slight . Everything suggestion a complete breach of privacy. Holding your boundaries in AA/NA is near to impossible especially to someone with near to non, and a zero sense of self. My drunkalog contradictory because I jumble it but I know what I mean. Long story short my mistrust of others triggers anger .. And intense emotions that stress me out. I keep trying though hoping to find a happy medium , which is funny . I have sometimes felt it amusing to some to watch me struggle .. But have felt too there maybe some trying to reach out, which I will most likely wear the hell out of , or I will just bounce going away feeling victimized... Reality askewed . Not sure where I'm going with this , but socially I am a outcast ... Any sugestions

Please please DO NOT go to AA (or any other 12 step group) regarding BPD, I have been sober in AA for 9 years and am also diagnosed with BPD, Major Depressive Disorder and an anxiety disorder. Here are the main problems I have found recovering from addiction as well as mental health problems in AA:
1) The difference between recovering from Alcoholism and BPD is that the former is a black and white recovery - you are either drinking or you are not, your either in recovery or you are not, HOWEVER it is not so simple with BPD... emotional relapse and set backs are common and it would never be possible to 'get clean' from BPD in the same way it is with drugs and alcohol.
2) In AA there is an emphasis on emotional sobriety... ie keeping oneself emotionally balanced in order to stay away from the drink. HOWEVER, it may not be possible for the BPD to have the same level of balance that the other recovering members achieve... this creates a subculture in meetings where the ones who are recovering from alcoholism on its own, get emotionally well quite quickly (within a year or so), whereas those who have mental health issues + addiction struggle for years and years and are made to feel like failures because they are not 'happy joyous and free'
3) Having spent many years in AA I have found there a strong cult like culture, which can play havoc with the BPDs boundary issues. Mantras like 'AA will love you until you learn to love yourself' can make the BPD feel an instant and intense bond with AA, however in reality the other members are not trained professionals and are not equipped to cope with the emotional demands of the BPD. Also there is a lot of sexual acting out in 12 step communities, sex addiction and predatory behavior is rampant... this can also play havoc for an emotionally vulnerable BPD
4) and here comes the really dangerous part... I have literally lost count of the times I have heard that if a person is taking antidepressants or any other psychiatric medication they are not 'sober' that hey are still engaging in mind altering substances abuse. Older members often tell new-comers to stop taking their medication, despite the fact they are not qualified doctors - highly dangerous.
After 9 years in AA... I am sober which is fantastic... but have managed to escape the cult and starting to see just how dangerous it is

Thanks for your ability to separate , and clarify the differences and the needs required by both issues.Ive been in AA for 30 some years and felt like a massive failure...not realizing I was BPD ..it's been a long time wandering around the same mountain.

The black and white thinking of 12-step programs (i.e. it's either AA or 'jails, institutions, or death', etc), as well as the disregard of any basic goodness in the self can cause more emotional issues than it solves.

There is a twelve step program called Emotions Anonymous,the only requirement is a desire to be well emotionaly.

ARe there any 12 STep programs for BPD?

Not that I know of, but there certainly need to be.