If you look at my records from Richmond State Hospital, you'll see that I am a marijuana smoker. I don't think this should be part of my record since I smoked it only twice, both times for medical reasons. But because marijuana is not approved for medical use in Indiana, that apparently makes me a marijuana addict. It makes me wonder: When does drug experimentation become drug addiction?

When You Can't Stop Using a Drug

The first time I used marijuana was when I was recovering from surgery. The pain medication left me severely nauseated, and my brother insisted I take a hit from his bong. Within minutes, the nausea had left. The high was enjoyable; I immediately understood why people would risk jail time for it. I also understood how someone could become addicted. 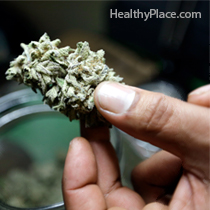 Apply the checklist of symptoms of alcoholism to your using pattern if you're uncertain; I prefer the CAGE test (Cutting Back, Annoyance, Guilt, Eye-Opener). HealthyPlace.com has a drug abuse screening test as well. These tests are a great way to determine if you have a problem.

When You Use the Drug to Treat Symptoms of Mental Illness

I used marijuana for the second time when I was attempting to fight off a psychotic episode. Long story short, it didn't work and my friends took me to the psych ward. There is a correlation between psychosis and marijuana use, but it's unclear if those affected use marijuana because they're psychotic or if they're psychotic because they use marijuana. But it doesn't matter--when you're using a substance to treat mental illness, you've in danger of crossing over from experimentation to addiction.

Self-medication usually doesn't work. I used alcohol to treat my borderline symptoms, not realizing that it made those symptoms worse just as often as it made them better. As my symptoms became worse, my solution was to drink more. If this describes your substance use, your experimentation has become addiction.

When You Wonder If You Have a Problem with Drugs

If it gets to this point, your experimentation has probably become addiction. That said, you're probably the last person to realize you have a problem.

My college therapist once asked me if I'd considered going to Alcoholic's Anonymous. I replied that it wasn't that bad, and she countered that she thought it was. I remained in denial for the rest of the year, but eventually realized that she was right--I did have a problem.

So what do we do? One therapist told my family that if drug addicts aren't going to meetings, they're using (I disagree since I stayed sober for three years without going to meetings). Acknowledging the problem is the first step to solving it. But we must do more than simply recognize the problem--we have to take action. Whether that's a 12-Step program, rehab or outpatient therapy, we have to do something.

Even if experimentation becomes addiction, there is hope we can stop.

APA Reference
Oberg, B. (2014, May 13). When Does Drug Experimentation Become Drug Addiction?, HealthyPlace. Retrieved on 2023, February 6 from https://www.healthyplace.com/blogs/borderline/2014/05/when-does-experimentation-become-addiction

Healing Power of Service: What I Learned from Hurricane Katrina
Can We Forgive When There Is No Justice?
Mark Noo
May, 15 2014 at 6:52 am

I stopped on my own too. That was about 3 years 6 months ago. I have not went to a single meeting but I have read a lot of literature.
It is amazing to me that many credible institutions cannot even agree on a definition of addiction, let alone a course of treatment.
Addiction is very political, until it just becomes another medical problem people with drug problems can probably expect a lot of conflicting information.
Abstinence, harm reduction, drug replacement, CBT, DBT, plain old white knuckling it, and appeals to God seem to be the way addicts quit. Addicts have to make their own way to sobriety because no one knows what will work for another person.
I am aware of at least 2 programs that still use the blame and shame approach.