With Bipolar, Failure Is Always an Option, Failure’s Not Bad 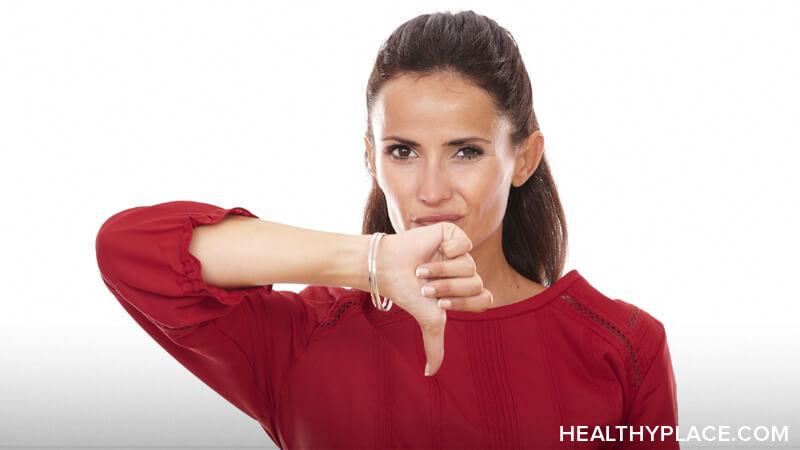 I guess we all know what failure is. Failure is a lack of meeting expectations. It’s not meeting a goal (Achiving SMART Goals with Bipolar). If I wake up in the morning and say to myself that I need to do laundry and don’t get it done, then I have failed. If I tell myself that I need to write three article and I only write two, then I have failed. And all those people who say, “Failure is not an option.” are just wrong, wrong, wrong as everyone fails all the time.

And the thing those of us with bipolar disorder have to realize is that bipolar practically breeds failure. Or, to be more exact, bipolar breeds an inability to meet our own expectations and goals. This is incredibly common. We have an expectation or a goal and bipolar disorder steps in, makes us incredibly sick and then it’s impossible for us to meet that expectation or goal. Bipolar makes us fail. And for many of us, bipolar makes us fail a lot.

Bipolar Disorder and Failure Is Not Bad

But here’s the thing, while, apparently, those failure-is-not-an-option people never don’t meet goals or expectations (yeah, right), normal people, including those with bipolar disorder, do. We fail all the time. I’m failing right now. I’m failing to edit an article that need my attention. Hi, failure, how are you doing?

But failure is always an option and failure is not bad. Failure is just a part of life. And it may be a bigger part of life for those with bipolar disorder, but it’s still just a part. We win, too – maybe infrequently, but we do. And there’s no point in beating ourselves up just because we fail, even if we fail more than we win. And if there’s one thing I know, it’s that people with bipolar disorder (particularly those suffering with bipolar depression) beat themselves up more than others, and, certainly, more than is remotely reasonable.

The phrase should be, “a lack of effort is never an option.” Because what matters is what we’re doing to try to succeed on a daily basis and not the final, overall score.

So I think it’s critical to remember that failure is always an option and that’s okay. That makes us frail, imperfect humans – just like everyone else. I know when I fail it’s often just part and parcel of bipolar disorder or sometimes it’s just part and parcel of life. Either way, I try to be gentle with myself and nonjudgmental because I deserve it – and so do you.

Tags: failure is always an option bipolar and failure

Anyone Can Self-Harm, Not Just Those with Borderline
Bipolar Medication Side Effect: Loss of Sexual Pleasure or Arousal
Michelle
February, 16 2022 at 8:01 am

I am bipolar and I am an alcoholic. Failing to be able to fight and brave my addition has been difficult, but talk therapy, the right meds (which I fought to take for years and then came to realize I needed them to calm my brain and fight the seizures) and AA have helped me fight the demons inside and get closer to putting my bipolar in a sort of "remission." I will never understand why God gifted me with this illness, but I have a feeling it was to get better and help others while I am here on earth. God bless you all. Keep fighting...YOU ARE ENOUGH!

I am a 79 year old male. I was diagnosed with "manic depression" (bipolar) when I was in high school back in 1958. My father would not let me take lithium (the only drug then) for my condition. The psych doctors said that I was "retarded", "slow to learn", and that I would always me a "mental case". I started taking Xanax Lexapro in Jan. 2019 and they have helped me greatly. I STILL THINK OF ALL THE BAD DECISIONS THAT I HAVE MADE IN MY LIFETIME THAT HAS RESULTED IN ME BEING A TOTAL FAILURE IN EVERY CHAPTER OF MY LIFE!

I failed to get into the university of my choice - but got summa cum laude at my 2nd choice and hd a great time. I got sacked from my first translation job - but then got a similar job and managed to stick it for 21 years - before being invalided out. I failed to find a husband - but had an active social and sex life until about 5 years ago, since when I've been more interested in my house and staying home. Sometimes I feel like a failure, but I use my fiagnosis of bipolar as a kind of ecuse to myself. I do my best and try hard. I have had rows with people - but it was their failure to understand my conditions or their lackof consideration that caused me to overreact. To quote Sinatra, "I did it my way"...

I have failed in many things. I had a failed marriage, I failed as a mother and I failed in my career. But I have succeeded in the biggest battle of them all, conquering my Bipolar Disorder.