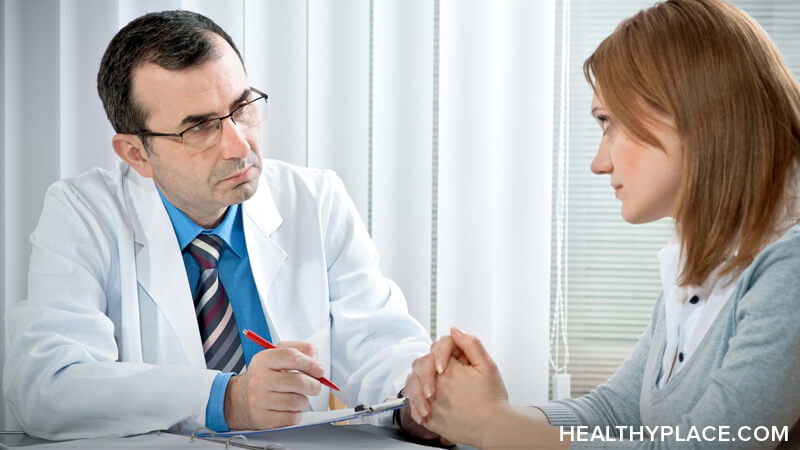 If you feel suicidal in any way, you need to talk to your doctor about your suicidal feelings. Even though suicide conversations -- with anyone -- are scary, you absolutely need to have them. I have had many I know this to be true. Read more on preventing suicides by learning how to have a conversation about suicide with your doctor.

Talk to Your Doctor About Suicide to Prevent Suicide

Why Don't People Talk to Their Doctors About Suicide?

I think the number one reason people don't have conversations about suicide with their doctors is because they're afraid of being "locked up" for being "crazy." In other words, people are scared their doctors will admit them to a psychiatric hospital for their suicidal feelings.

I understand that fear. I have had that fear. That fear has altered my behavior in the past.

But what I can tell you, is that I have talked to many doctors about feeling suicidal without them even suggesting that I get admitted to a psychiatric facility, let alone forcing me into such a place. The only time I have been in a psychiatric hospital is when I chose to admit myself (for suicidality).

And believe me, talking to your doctor about suicide doesn't make you "crazy." Whatever you have to say about suicide, I guarantee your doctor has heard it all before. You may be unique as a person, but we tend to have similar suicidal ideations and experiences.

Scary Conversations About Suicide with Doctors Have to Happen

But here's what you have to know: if you don't talk to a doctor (or another professional like a psychologist) about your suicidal feelings, then you can't get better. You can't feel better. Those suicidal feelings are there for a reason and they are unlikely to leave on their own. I know you want to feel better. No one wants to feel like they want to die way. I certainly never wanted to feel that way. I know you don't want to either.

So even though it is very hard and often very scary, a conversation about suicide with your doctor is warranted any time you feel suicidal. Yes, one option in that situation, if it's extremely severe, is hospitalization. But there are many other options too. But you won't know about those options if you don't talk to a doctor. Truly, talking to a doctor openly and honestly about your suicidal feelings can save your life -- and your life is absolutely worth saving.

Be Honest When You Talk to Your Doctor About Suicide

The critical thing to remember is when you have a conversation about suicide, you need to be honest. Because of the fear of these types of conversations, people often don't come out and say, "I'm suicidal and I need help."

But that is what you need to say. Doctors can't read your mind and sometimes they don't pick up on more subtle language (although admittedly, maybe they should). So say what you need. Say what you're feeling. Don't be shy. Get the help you need to prevent your death by suicide.

That is what I want people to know this Suicide Prevention Month: Your suicide is preventable. Help is available. Reach out and get it.

Hi Natasha,
I've had the same experience. The doctor would suggest the hospital, but I always made the decision to go myself. I haven't gone for the past 16 years even though the suicidal thinking got worse, because my outside support and coping skills got better. I don't know about others but it took a long time for me to talk to the doctor about suicide. I spent so much time pretending to be okay at the dr., probably because I spent so much time at work and on the outside pretending to be okay. Took a long time before I could discuss real feelings.