Making Doctors Listen to You 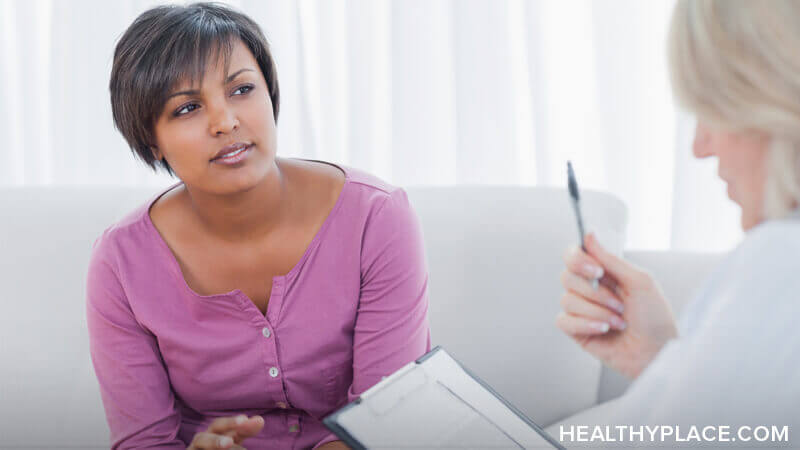 Making doctors listen to you is actually a tall order. I know it seems like it shouldn't be, but it is. If you read my piece last week, "Psychiatrists Won't Listen to Patients -- 8 Reasons Why," (applicable to any type of doctor) then you have an idea as to why. So while last week I focused on the problem, this week I want to focus on the possible solutions. Here is what you can do to make doctors listen to you.

I think doctors fundamentally think logically and, yet, they are treating mental illness -- something that defies logic to a large degree. This is something that, as a patient, you have to overcome. (Yes, I know, it would be nice if they did this work but we're focusing on what you can do, not what they can do.)

The way I do this is by trying to think logically and unemotionally when I'm talking with a doctor. I know this is hard, and maybe even impossible when you're acutely ill, but it's one technique that will help you make a doctor listen to you if you can use it. By using logic, you elevate what you're saying in the doctor's eyes. So, for example, instead of saying "My depression was really bad this week," maybe while crying,I might say, "My depression has increased from a four to an eight and I cried every day this week," while calm, if possible.

Not only is that logical, it's also empirical. It's something you can say and measure every time you see the doctor. The next time you might say your depression is at a seven and you only cried three days in the last week. It's a great way of tracking how you're doing for your doctor (and for you).

Now, the typical bipolar patient did not go to medical school, nevertheless, there is some medical language that we can get used to and use in doctor's appointments. For example, do you know the specific symptoms of bipolar depression? Can you rate how you're doing on each one (understanding that you may not have them all)? Do you know the specific symptoms to mania or hypomania? Can you rate yourself on each of those? Do you know what your other symptoms are? (Many of us experience very drastic symptoms that are critical to treat but are not listed in the Diagnostic and Statistical Manual of Mental Disorders.) The bipolar articles here at HealthyPlace are a great way to learn these symptoms and learn this language.

One caveat to this, though: do not use verbiage you do not understand. Attempting to sound like a doctor isn't what you want as, after all, you're not one. What you want to do is get to know the words that make sense with your diagnosis but also know that you may not using them 100 percent properly. For example, don't say, "I was experiencing psychomotor agitation," when you're not sure exactly what that symptom is. What you could say instead is, "I felt agitated physically and irritated psychologically all last week." To a doctor, this might equal psychomotor agitation -- or it might not -- but either way, you're getting across your reality in a way he's more likely to listen to.

Making Doctors Listen to You By Writing Down Symptoms, Side Effects and What You Need to Discuss

It's really normal to have doctor amnesia. Okay, that's not a formal thing, but it's a real thing that happens to pretty much everyone. When you think about your appointment, you think about 10 things you want to say. Then you get there, and you can only remember one. If this is you, know that this is totally normal.

But, of course, you can fight this by writing down what you need to say ahead of time. You'll want to write down your illness symptoms, when they occur and to what degree, the bipolar medication side effects, when they occur and to what degree and anything else you need to discuss. And really write these things down. Don't make a mental note. You'll forget. Trust me.

And when you have things down on a piece of paper it's like proof of what is happening to you. When you make notes over time, the doctor can review them and make better decisions by listening to what you're really saying.

Making Doctors Listen to You By Demanding Respect

Some doctors forget that we are thinking creatures too. We may not be doctors, but we have feelings, ideas and thoughts that need to be respected. So if you feel like your doctor isn't listening to you, say, "I feel like you're not listening to what I'm saying right now. It's really important to me that I have input into my treatment. Is there a way I can do this more effectively for you?"

This is s hard thing to say to a doctor for more of us, but it's worth doing because it can wake your doctor up and improve your doctor-patient relationship so much.

Making Doctors Listen to You By Bringing Backup

When a Doctor Didn't Listen to Me

Learn about a time when my doctor wouldn't listen to me and what happened because of it.

Making Doctors Listen to You Is Doable -- Probably

Using the above tips usually works -- usually. It's quite possible, though, that you just have a bad doctor who doesn't treat you well and nothing you do can change that. In that case, it's time to fire him and get someone new. Yes, I know this isn't always possible but if you can, take it to a higher authority, take it to your insurance company and demand someone new. Do what you can because you deserve to be listened to.

And remember, you're paying him. He works for you, not the other way around. If you're not getting what you need then he's the one not doing his job.

Tags: psychiatrist listen to you

APA Reference
Tracy, N. (2019, May 31). Making Doctors Listen to You, HealthyPlace. Retrieved on 2022, July 4 from https://www.healthyplace.com/blogs/breakingbipolar/2019/5/making-doctors-listen-to-you

Psychiatrists Won't Listen to Patients -- 8 Reasons Why
Can Medication Noncompliance in Bipolar Ever Be a Good Thing?
Catwoman
January, 17 2020 at 2:47 pm

Hi Natasha. I loved your vlog! I've been there too. I was diagnosed with unipolar depression initially. I later had a severe manic episode. Fortunately I had a new psychiatrist who was able to change my diagnosis to bipolar disorder. Keep up the great work!

Hi Catwoman,
Thank you so much. I'm glad you got the right diagnosis.
- Natasha Tracy