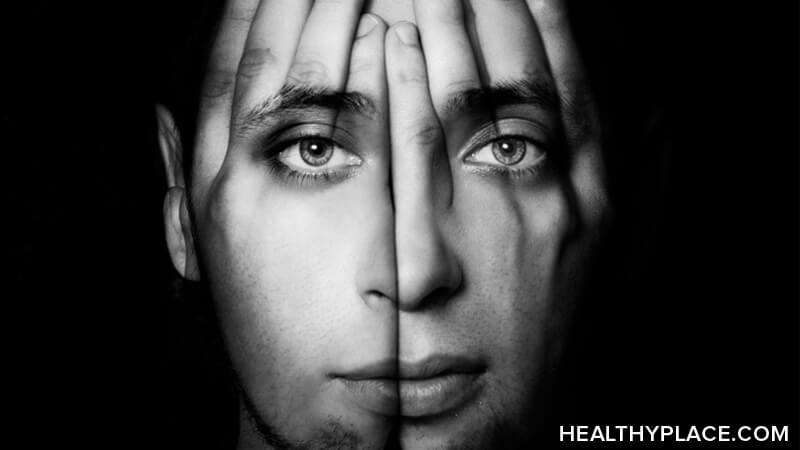 Lady Gaga talked about a variety of things with Oprah Winfrey on January 4, 2020 (full interview link at the bottom1), and mental health conversation was definitely on the menu.

Lady Gaga on Taking an Antipsychotic

Lady Gaga has this to say about antipsychotics:

Lady Gaga: And I also have to say, I have to say it, and I know that this is controversial in a lot of ways, but medicine really helped me. And I—(applause)—I think a lot of people are afraid of medicine for their brains to help them. And I really want to just erase the stigma around this because I am sick of saying it over and over and over again . . .

Oprah: And so medication has helped you.

Oprah: And if you didn't take that medicine, what would happen? What would your life be like?

Lady Gaga: I would—I would spiral—spiral very frequently. And I would spasm in my sleep.

Lady Gaga started taking antipsychotics because of a psychotic break which she talks about here:

Lady Gaga: I had a psychotic break. I'll explain what happened. Here's my brain. Right? Here's my center. Right? And then I was triggered, really badly, in a court deposition, and I just, like, this—this part of the brain where you stay centered and you don't disassociate, right? It went like this. (Indicating.) It slammed down. And my whole body started tingling, and I started screaming.

Oprah: Where were you?

Lady Gaga: I was in a hospital. And it's very—it's very difficult to describe what it feels like other than that you first are completely tingling from head to toe, and then you go numb. But what is essentially happening is the brain goes, ‘That's enough. I don't want to think about this anymore. I don't want to feel this anymore.’ Boom. And—

Oprah: You literally break from reality as we know it.

Lady Gaga: You break from reality as we know it. You have no concept of what's going on around you. There is nothing wrong. But you are in a traumatic state that you feel like—like I remember going into the hospital and screaming, why is no one else panicking? Why aren't you panicking? And then they run a psychiatrist in and then—and I'm in head-to-toe pain at the same time. Right? And they brought in a psychiatrist. And I said, can you get me a real doctor? And he was, like, hey, so nice to meet you. And he sat down. And I was, like, I need medicine. I don't feel well. I can't feel my legs, I—help me. Right? And then he just said, I need you to explain to me what happened today. And I was so annoyed. But I'm telling you this story because even I who run Born This Way Foundation with my mother was irritated that they brought a psychiatrist in to help me. I mean, that's how, like, gone I was. I was so separated from the world. And once we started talking, he realized what had happened to me, and then he ordered medication for me that I took, reluctantly, at first, and then he became my psychiatrist and assembled a team for me, and I went away to a place that I go to sometimes still for, like, a reboot.

Lady Gaga: And they took care of me and we got all of the things lined up. And I have a very unorthodox, actually, set of pills that I take. But they—they saved my life. And I'm very grateful.

So there it is. Someone with the stature and fame of Lady Gaga talks about taking an antipsychotic and experiencing psychosis in an interview with the almighty Oprah Winfrey herself. This could be ground-breaking for the very word "psychotic."

I hear the terms "psychotic" and "psycho" used derogatorily more than I hear them used in any other way. In fact, if you were to ask a person to define the word "psychotic," my guess is that most couldn't do it correctly.

For the record, psychosis is the presence of delusions (persistent beliefs that aren't true) and/or hallucinations (experiences that don't exist). (I would say that what Lady Gaga describes above is a psychotic break -- a complete break from reality -- but psychosis is more commonly present as an enduring state.) It's important to note that while Lady Gaga's description of psychosis may be accurate for her, psychosis, like all serious mental illness states, tends to be individual.

Why Lady Gaga Talking About Antipsychotics and Psychosis Matters

And when you see Lady Gaga talk about experiencing psychosis and taking an antipsychotic, it's almost impossible to mesh the societally-maligned image of one who is psychotic with that of a world-famous music star. And yet, there she is. She's bringing these terms out into the light. And you know what, when you see them there, they aren't nearly as scary as they were when they were hiding in the dark and shrouded in secrecy.

Now, I have complained before that it seems like to be accepted as a person with a serious mental illness, you have to be extraordinary (à la John Nash or Carrie Fisher), and, obviously, Lady Gaga fits that mold. But if it takes someone like her to start talking about psychosis in a real way, then I'll take it.

Because maybe once Lady Gaga admits to taking antipsychotics, it'll be easier for the rest of us to admit to it too. She put the ball in play with her enormous spotlight and now maybe the rest of us can create a little forward motion.

Because psychosis is not uncommon. About three percent of people will experience psychosis at some time in their lives,2 sometimes related to a mental illness like schizophrenia and sometimes not. And taking an antipsychotic is not rare either. About 1.6 percent of people in the United States take antipsychotics3 for reasons that range from depression to schizophrenia (many who have never experienced psychosis, [like me] by the way).

So for the millions of people out there who have experienced psychosis or take an antipsychotic, we need to talk about these things. Lady Gaga was the first, but for it to matter, she can't be the last.

great article.
I had panic attack. Its common and many people have them .
I see a psychiatrist. That's normal for people to do so and I receive medication.
I don't care what anyone thinks either !

I have bipolar 1. I had my first severe manic episode last September when I also had a major psychotic break from reality. Funny thing is, I did not even know it until I noticed I was going to Montgomery Alabama. so, I said ‘oh, we re going to Dairy Queen for ice cream, my favorite!’ Well that Dairy Queen turned into Baptist South Hospital Emergency Trauma unit for a day. I almost had to be held by the security guards I acted up so. I did not want to be here. I refused the shot they wanted to give me so my wife asked me if I would let her give me the shot and I said OK. So, the nurse popped me with the shot me not even knowing he did it. THEN, they gave me another shot and boom I was out until the next day and woke up in the trauma center. Well, I ended up staying at a psychiatric hospital for seniors for two weeks. The most Hellashus two weeks of my life. They took my chair away and even my toilet paper. I had to go to the desk to use it and bring it back when I was finished. I broke off a tooth at the gum line and they did nothing. I had a terrible itchy rash all over and the nurse put a tiny bit on the worst 3 places but it was all over. I was distraught and I finally blew up in the day room in front of everyone. The next three days before I got out changed from no patient rights to they did everything I asked for like in a five star hotel within reason. They are lucky I did not sue their asses. I still have all of the documentation I wrote while in the hospital and I kept it with me at all times. Some of it kinda like disappeared, but before I left, I demanded they search for the rest of it and it just magically appeared. Hmmmmmm....
Anyway, now I sort of know what to do when I go into mania without landing my ass in the hospital. There is definately a stigma attached to being mentally ill, especially the way my family treats me like a little kid. That was fine when I was out of my head, but I am back now and I do not like the way I am being treated. I have had depression for 20 years and it has progressively gotten worse with more illnesses added to it including this one. I have multiple mental illnesses, but with the proper medication I can still function but I am on disability.
Aken

Thanks for this article. It would be so helpful if there were more conversation about psychosis. I know the definition, but what does it mean from the inside? When my therapist asked me, "Are you psychotic?" I said, "How would I know?" She let it go at that, which is just as well, because at that point, I didn't trust her. But I still don't know what kind of sense to make of some of my experiences.

Hi WIlla,
I haven't experienced psychosis, personally, so I can't say from personal experience. I know that some people with psychosis are able to understand that what they're seeing/thinking is part of an illness. I think this is often done through reality-testing. So, you look for empirical evidence to validate your thinking. Can other people see what you see? Do other people think what you're thinking? And so on.
This is a really great resource on reality-testing (not related to HealthyPlace): https://uwaterloo.ca/student-success/sites/ca.student-success/files/uploads/files/TipShee…
I hope that helps.
- Natasha Tracy

Encouraging. Even in my bipolar story group on Facebook, people act shocked when i use the word psychotic. And having to acknowledge that about myself makes me feel like a freak, and less of a person.