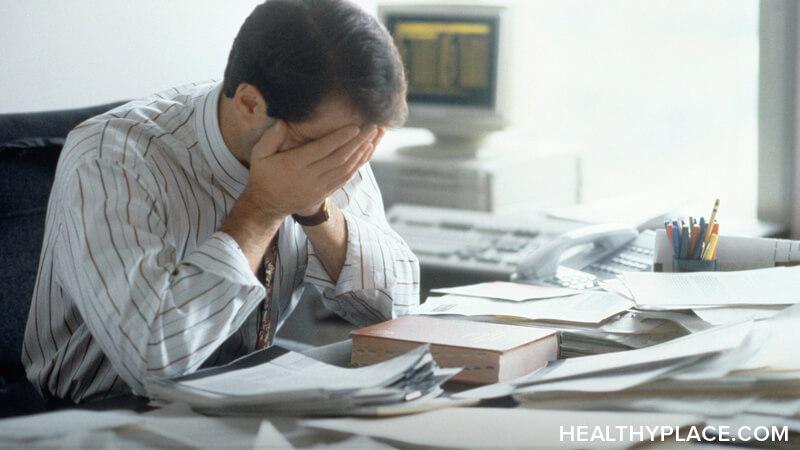 Bipolar has a definite effect on one's career. Bipolar can alter a career, derail a career or even, in some cases (like mine), create a career. I have yet to meet a person whose career has not been affected by his or her bipolar disorder.

My Career with Bipolar Disorder

Bipolar has definitely affected my career. I had planned a career for myself. I went to university and got a Bachelor of Computer Science. I worked in software for 10 years, in fact. With tenacity, ambition, luck and skill I managed to work myself into a job at one of the most well-known software companies in the world.

But bipolar is a cruel mistress.

By the time I had gotten to that job, my bipolar was significantly trying to kill me. I had to take time off for disability. I had to prioritize treatment. I had to even take naps on the floor of my office in the afternoons. (I would turn the lights off and close the door so everyone thought I was out for lunch.)

I can now admit bipolar affected my career there.

I don't know what would have happened in the long run. I probably would have kept my job and had a mediocre career there. As it happens, however, I got laid off in the massive cuts of 2009.

Long story short, that is how I became a speaker-writer-consultant. I didn't have a job and couldn't find a new one because of the sheer mass of people all trying to find the same kind of job I was.

How Bipolar Affects My New Career

Much like I met my first career with tenacity, ambition and skill, I had every intention of doing the same thing with my new career. And while, initially, I did do a lot of that, over time, those things were curtailed greatly by the bipolar. I have been in this cobbled-together career for almost 10 years now, and there are so many things I thought I would have accomplished by now. I've only published one book, for example. This seems paltry in 10 years. What the heck have I been doing all this time?

Handling bipolar, that's what I've been doing all this time.

Bipolar has affected this career more pointedly than the last because the bipolar disorder has advanced. And now I have no choice but to make this career work because I would no longer be capable of spending eight hours a day in an office. Bipolar has taken that from me. Quite frankly, no matter what I want, at this point, bipolar is making the rules and defining that of which I am capable.

I view this all as very sad as I was a very ambitious person and I feel that is yet another part of myself the bipolar has taken away.

However, I suspect people without mental illness find the idea of an illness that simply makes you "sad" and "happy" just an excuse for not living up to my potential.

But anyone's body can betray his or her career ambition at any time. See this video for an example.

I also think it's important to mention that I am still lucky -- not only have I made this career work, but I have a career. Some people with bipolar disorder are disabled to the point where that is not possible.

It's Hard to Accept Bipolar Affecting Your Career, But It Happens

I've always been an ambitious and career-oriented person. I'm just wired that way. But I've had to learn that just like my bipolar disorder doesn't define me, neither does my career. I'm bipolar, and that affects a lot of things. I'm a writer, and that affects a lot of things. But neither of those things are me in my entirety; I'm many other things as well. I think it's sad that bipolar insists on putting barriers around my life, but I know I have to work within them because there is no other choice.

If bipolar has affected your career, know this: you are not alone and you are more than merely what you do for a living.

Lady Gaga Takes an Antipsychotic and Talks Psychosis
Is It Time to Go Back to Therapy for Mental Illness?
Patrick Freeman
February, 3 2020 at 8:36 pm

To further complicate matters,
1) Most people don't really think of the brain as an organ of the body. So while a degenerative kidney disease is a tragedy, a serious mental illness is brushed off as a weakness of character.
2) Many times, a level of stability is offset by the side effects of the medications. I've had to abandon several promising medications because I couldn't handle the side effects which were as debilitating as the bipolar.

Patrick, I completely agree. The merry-go-round of finding medications that do their job without causing debilitating side effects is exhausting. It's one of the main reasons I have to miss work and really hard to explain to others.