If You Can't Make Decisions Because of Depression, This Helps 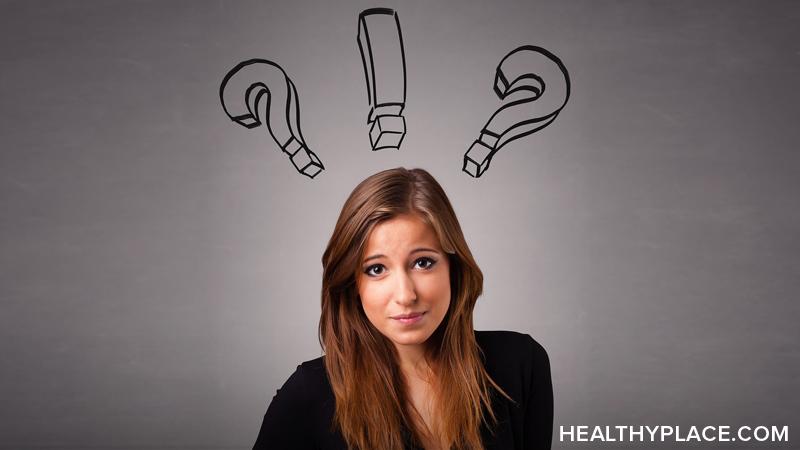 How Does Not Being Able to Make Decisions Because of Depression Feel?

Believe me when I tell you this is a real thing. When I go to make a decision, I often feel frozen. It's not that I'm overtaken by a depressed mood at that moment, it's that I'm overtaken by the fear of making the "wrong" decision. Literally, I'll be too frozen to pick out clothes or something to eat. Everything I go to do feels "wrong" somehow. It's a combination of fear, anxiety and self-hatred (as in, I'm too stupid and weak to be able to make the right decision). All of this ties into depression.

And while I don't understand why, it's often more difficult to make small decisions than it is to make big ones. For example, I chose to buy a condo -- a huge decision and yet I felt I made it with a reasonable amount of anxiety; I chose to get a kitten after I lost a cat; I made all the decisions involved in writing a book; and yet, deciding to open the mail or text a friend is very hard for me.

I've been facing indecision because of depression for years. Eventually, I realized that routine can help iron out a depression-related inability to make decisions.

So more and more, I rely on predefined routines. I don't make decisions as much as I simply do what I'm "supposed" to do. So, I virtually never wake up without knowing what I'm going to eat for breakfast ahead of time. I spent years eating only one thing when I was at home: peanut butter on whole wheat, sesame crackers, exactly three crackers worth, with, of course, coffee. And that's it. I wouldn't waver. Now, I occasionally mix it up with chia pudding, but that's only an option if I've made it ahead of time, obviously.

I know what I will wear every day. I work from home, so I stay in pajamas. I will wear the same pair for multiple days so as to make fewer decisions.

I also know when I will wake up, and the pretty much exact order of events for the first two hours of my day. It's the same every day. (Except when I go out to breakfast. But then I just invoke another routine.)

And while others may find routines limiting or boring, I absolutely love them. I feel free because of them, actually. I guess it's a freeing of my brain. My brain doesn't have to expend the effort to make all these little, trite decisions and that's almost like a nap in and of itself. (And remember, Stability in Bipolar Requires Routine.)

Admittedly, you can't use a routine for everything, but you can use it for some part of every day.

So if you find that you can't make decisions because of depression, try making up some routines for yourself. Write them down. Assign times if that helps. Remember though, the idea of a routine isn't to create stress and anxiety (as in, I have to stick with it or else) it's actually to alleviate those things. So try it and see if it makes things easier for you.

Do you have any of your own decision-making techniques? Let me know below.

APA Reference
Tracy, N. (2019, August 6). If You Can't Make Decisions Because of Depression, This Helps, HealthyPlace. Retrieved on 2020, September 23 from https://www.healthyplace.com/blogs/breakingbipolar/2019/8/if-you-cant-make-decisions-because-of-depression-this-helps

Taking Bipolar Medications to Please Other People
When Does a Bipolar Brain Work Best?
Kristy
October, 26 2019 at 4:21 am

I also can’t make the most simple decisions. I will stand looking at all the different brands available for a product and become so overwhelmed by which one to choose, I walk away and don’t buy anything. I tend to make big decisions in haste and often they are not the best decisions. Sometimes I feel completely dumbfounded by the simplest questions.

I haven't purchased new clothing of any kind, underwear, everyday clothes, dress clothes, pajamas, outerwear or a single pair of shoes in over 5 years. Does my wardrobe look beat up? Absolutely! Same holds true for any accessories from purses to belts to jewelry, it's been years! Beauty items, makeup and perfume, haven't bought them. My sisters give me clothes or makeup for my birthday and Christmas, I graciously accept their gifts, wear and/or use them, but never replace them.
Like the author, I, fortunately, work from home so my crappy clothes aren't a problem as far as work is concerned.
I don't know how it all began, I've been in treatment for anxiety and depression for over 15 years, but this particular issue grew from hesitation about purchases to an all-out refusal to purchase within the last 5-6 years. It causes me significant anxiety if I'm invited to an event, family dinner, girls weekend, dinner with my husband or worse, a funeral. I am so ashamed of my appearance, I have experienced panic attacks just with an invitation. I have tried purchasing online. When I sit down to browse a website, I am utterly overwhelmed. I think I need to order a pair of jeans, then I think, "No, I have so many other things I need worse than a pair of jeans, I won't order the jeans today." I put myself through the very same process whether it is a nightgown, trousers, a shirt, t-shirt, shoes, everything! On rare occasion, I am able to make an order, but when it arrives, I send it back without even looking at whatever I ordered. I tell myself, "I shouldn't have spent the money on this, I don't really need it", I'll buy something I really need later. The thought of making one decision leads to another decision to be made and then another and I'm caught in this vicious cycle. My doctor and husband and sister have been working with me about believing I am worthy of new things and the importance of self-care. My sweet sister takes me out "only to shop", but not buy just to have me see what's in the stores and make a list of no more than 3 items I think I'd like to buy on our next trip out. I've tried on clothes, made selections, taken them to the cashier and at the very moment of purchase, I leave the store.
I'm a mess and no one hates it more than me.

Hi Judy,
May I suggest online shopping? I find it _much_ easier to click and buy and then send back what doesn't work if I need to. The stress on that is so low compared to going out to some mall.
Also, if you can make decisions and then leave at the cashier, can you make decisions and then have someone else use your credit card to pay for them while you wait outside?
Just a couple of things that might help. Good luck.
- Natasha Tracy