Parents want the best for their children. So, it’s a sad and guilt-ridden moment indeed, when you realize that you have passed mental illness on to one or more of your children.

I suffer from both depression and anxiety. The two often go hand-in-hand. I was diagnosed with depression thirteen years ago when I suffered from my first major depressive episode. The anxiety component was diagnosed along with it but I can remember having anxiety attacks as young as age ten (though it wasn’t diagnosed or explained back then). They would happen out of the blue; my palms would get sweaty, I would get very agitated and couldn’t sit/lie still, my heart would race, my teeth would clench and my entire body would quake. This would happen in waves. The longest wave lasted upwards of eight hours.

Passing Your Mental Illness Onto Your Children 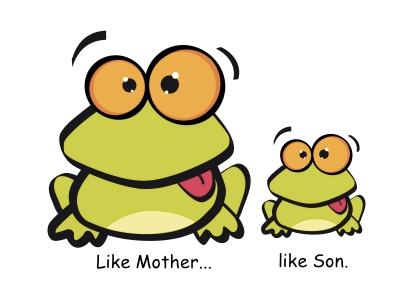 At age eleven, my son started exhibiting odd behaviors before bed, and though I tried to deny it, I knew immediately what was going on. This was no ordinary “there’s a monster in my room” stuff. My son’s palms would sweat, he would be extremely agitated, his teeth would clench and his body would quake. He was me! He had inherited my anxiety!

I was heartbroken. And the guilt! A mother is supposed to protect her child… this wasn’t right… it wasn’t fair! I was helpless to prevent what had happened to my son… was continuing to happen to my son. I wanted to scream. I wanted to cry… and did cry, often.

When I settled myself down, I realized that I was in a unique position to help my son with his anxiety… something I had never had. First, I had to educate my husband so that we could work as a team. Then, we began the arduous journey of getting my son the help he needed.

It's Heartbreaking When Your Child Inherits Your Mental Illness

To this day, I cry about passing my mental illness down to my son, and he is almost twenty. He still has frequent anxiety attacks but long ago, thanks to his magnificent psychologist, learned how to cope with them. He has shown signs of depression but the jury is still out on that indictment.

My late Aunt had severe OCD and my Dad, though never diagnosed with anything (not that they did that back in the day), told me that there was a time in his life when he was on valium because he was literally “climbing the walls”.

There is apparently scientific proof now that mental illness is hereditary. Ironically, that means that I inherited it from someone in my family. That doesn’t make it any easier for me, knowing that I passed my mental illness(es) onto my son. The guilt can be incapacitating, if I let it. Like all the other symptoms of my depression, I just have to keep telling myself that it’s not my fault.

And then I move on.

The Depression Roller Coaster Won't Let You Enjoy the Ride
Why A Correct Depression Diagnosis Is Important
Melanie Schlauder
October, 23 2019 at 9:05 pm

I am on the eve of my 47th birthday. I look at my 4 beautiful children and my heart aches. I suffer from depression, anxiety and ADHD. I somehow made it through med school and became a pediatrician with interest in teen girls bc I struggled so much in those years. I made horrible decisions and am very fortunate to not have suffered severe consequences other than my self-worth. I ended up finally on an antidepressant in med school when my dad was diagnosed with a terminal brain tumor. My husband and I are both physicians, so didn’t push the “we have to have a baby” until we were in residency And I was 34. We ended up suffering from infertility. We did IVF for our first two children. Sometimes I feel like I was not genetically designed to have my own children and pass on my genetics to them, but yet we forced it. We “went against nature“ my mind tells me. I will never forget the first time my daughter had her first panic attack at 8. I was lying next to her and she was sobbing. I asked what was wrong and she replied “I don’t know mommy but I just am so sad inside and my body is making me cry. It hurts so bad”. Well, the cycle repeated with our 3 sons. Yesterday in the kitchen my 7 yr old (our daughter is 12 now) said to me “mommy pray for me because my brain is telling me to hurt myself”. Why should that ever cross a beautiful child’s mind, but yet I bare the responsibility. It is ultimately my fault. My oldest three are on Prozac, following in their mommy, grandmother and aunts footsteps. My youngest is only 4 and he just holds me when I cry. Thank God my husband is truly a gift. He has always been there for us. He doesn’t deserve what he has to endure but he never complains. He only loves us. But, I feel so guilty.

I'm not sure who in my family passed depression down to me, but I know that I passed it down to my oldest child. I choose to look at it in a more positive light - if that's possible. Let me explain what I mean by this. Because I've learned to manage my depression and have already walked through so much in dealing with it, I am better equipped to help my son navigate it. I know that feeling guilty for my genetics would not only be a waste of time, but it would also hinder my ability to cope with my depression and make it more difficult for me to help my son learn to cope with his. Now, I'm not saying that I don't have hard days and that I don't ever go through times of blaming myself. I'm human; of course I struggle sometimes. What I am saying, however, is try to look at things in as positive a light as possible. It will make things easier to work through for both you and your children.

Help! My 34year old daughter shows no empathy, compassion and has no patience with her two children. She is constantly speaks demands to them and states in front of them that she has no time for this. She is only into herself. She can't wait for the kids to go to their fathers house. She laughs when I ask if she spends time with her children. She is sadistic, lack teachings of faith, and the kids longer have toys because its messy. Suicides run in my husbands family along with depression and family treatment of chemical imbalances. She is never happy. How can I help her and help my grandchildren who fear her and are happier with their dad.

I have bipolar1 PTSD gad pannic disorder the only treatment I'm getting is xanax and something for depression but its not doing the job. Help me please

What a good idea to include this item in the Healthy Place.
My middle child had birth trauma which probably explains his mental illness. The big learning curve began when he was in his late teens. I'm a teacher, Dad in medicine, and it was only then that we learned there is depression, anxiety, autism and narcissistic personality type within both families.
By learning and sharing the situations we've been in, we've gained acceptance, worked on ignorance, and although the regrets, and wishes for his better mental health remain, we're all both wiser and sadder.
MI impacts hugely on family and I have worked in the field now for ten years.
The birth trauma could have been avoided - I had trained, it was a second safe pregnancy, and the hospital midwife rang the Doc that I was dilated, so once I began pushing I couldn't stop - but the cervix wasn't dilated...........
He cried inconsolably for 5 months if not on the breast or asleep - I now guess it was a migraine and 35 years ago in a third world context there was nothing done about it.
His older brother was a loner and depressed/suicidal as a teen, before this diagnosis which became schizoaffective. His dad had episodes of depression, and his younger sibling too as a result of this and family tensions and estrangement.
BUT we also have good times, and happiness-building activities. Although we didn't escape divorce we're still all alive!

I passed my illnesses on to my oldest 3 sons and my daughter at the tender age of 12 has attempted suicide, I myself have PTSD< ADHD< major treatment resistant depression, Gad and Borderline. I have done my best but heredity has done them in and I have major guilt over it.
my parents have finally admitted to and gotten help for their MI (dad Major depression Mom anxiety)
I wish I had known I wouldn't have had kids.

I suffer from Bipolar, Generalized Anxiety Disorder and undiagnosed OCD that I have had since I was a child. The OCD has just never been bad enough to be diagnosed and treated, but the signs are there. Anyway, my daughter has been showing signs of anxiety already, and she is only 6. I do feel guilty, because I know just how miserable anxiety can get. But when she has anxiety, I know what to do for her, so that helps some. I think I will feel worse if she starts showing signs on a more consistent basis instead of just every now and then having a panic attack. Right now I know it isn't bad at all. And if they develop Bipolar, I will feel really bad, but I was not diagnosed until well after they were born. And having them, I like to think it wouldn't have changed my mind about having them had I known before. Especially because my Mom and Dad are not Bipolar. My Grandfather is.

Am curious to know if the grand father you mention was on your mom's side or your dad's side?
Thanks

I also passed my mental illness down to my son. I suffer from bipolar and anxiety. He suffers from anxiety not bipolar and I hope that never develops. His anxiety is much worse for him than mine was at that age. My anxiety is very bad right now and he seems to be mimicking me. He is 15 and last year he missed 8 straight weeks of school. Failed all classes. He now is in a school for kids who have anxiety, depression and whatever. Slowly he is opening up in school and with the kids. I hope he continues.