Though I have read little concerning the connection between mental illness and sleep, I have always believed there to be a strong connection between the two. This idea stems from the personal experiences I have had with my sleep disorder, and how it seems to effect my mood and thinking. 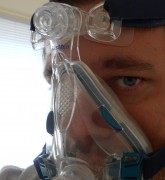 The medication I take may be central to my rehabilitation, but without quality sleep I am still seemingly doomed to a world of psychosis. These two different treatments, CPAP (continuous positive airway pressure, a breathing therapy) and antipsychotic medication, must be exercised together for me or neither will work well. This is why I consider my sleep disorder treatment to be a central component of my overall therapy. These experiences have convinced me that mental illness treatment should be closely coordinated with any physical ailments that someone might be experiencing, particularly if such physical ailment could aggravate a mental illness.

Overall, the magic bullet for treating my Schizoaffective Disorder was not a particular form of treatment or medication, but a blend of several different ones that seemingly work together. I would imagine that there are different reasons and triggers for someone to start having psychotic episodes. Currently genetics and biology dominate as the root cause of Schizoaffective Disorder, but I’ve always believed that this is an oversimplification of a complex situation. Whatever the causes behind a particular case of Schizoaffective disorder, it is the treatment and rehabilitation that are most important. In widening the spectrum of reasons for the illness, you are also widening possible different treatments for it.

I am neither a clinician or researcher, and I am speaking only through experience, but I do think that some psychiatrists and psychologists should take a more broad approach to treating Schizophrenia and Schizoaffective Disorder. I once spoke with a well-known researcher who seemed to be looking for a magic bullet that would fix the disorder, and took a more unified approach into its treatment and causes. If he were to ever find such a treatment, I would throw a huge party for all my mentally ill friends and be forever grateful. Unfortunately, I would be surprised if he or anyone ever did.

The “Insanity” of Anders Behring Breivik
The Effects of Sleep Apnea on My Schizoaffective Disorder
Kay Walter
February, 12 2014 at 1:51 am

Thank you so much for your posts. This is incredibly helpful. My husband and sons have schizoaffectve disorder. I am listening to my husband's loud snores right now. They have always had sleep problems, especially in the winter and I really appreciate this information. I think this is definately worth exploring.

Hi Dan,
Very interesting thoughts about sleep. I was diagnosed as schizophrenic in the early eighties and was in and out of hospitals etc until 1997 when I was one of the very few people who suffered from the illness, but made a full enough recovery to be able to come off medication. I now work full time in the field of mental health but still have sleep problems. I wake up frequently with my snoring but have never thought about the relationship this may have with my past condition. your article has changed this and I feel you should continue to look for answers.

There could be some type of link between mental illness and sleep disorders. Hopefully getting better sleep can help your Schizophrenia symptoms also. I know I always feel better when I sleep.

I've done some research on schizophrenia as my 33 year-old son suffers from this diagnosis. I believe a major problem is sleep apnea. I believe he suffers with this disorder but has never been formally diagnosed with this. He snores very loud and I have heard him stop breathing while sleeping alot. I don't think I can convince him to go to participate in a study as his paranoia stops him. I am seeing his world getting smaller and smaller. He no longer works, hardly leaves the house (now lives with his brother). He is a chronic smoker, doesn't take vitamins, and is drinking more and more. He needs help. I feel that his psychiatrist is just keeping him medicated (seroquel) and is collecting the money. My son and our family needs help. Is there no accountability for psychiatrists? Please send me an email as I'm sure I won't find this post again.

For me the apnea treatment was huge. It was almost as effective as the medication was in my treatment. I'd definitely try to get him in there and get a sleep study at all costs for his physical and mental health.

I have been a consumer since before the word consumer was out. I was aware of my illness by 3rd grade. I was checked for symptomatic issues at this point by a school psychologist at age 15. I knew the symptoms of schizophrenia and started doing research in the library on mental disorders with smell and hearing and paranoia.
I kept most of this to myself. My first actual diagnosis was at age 21. Medications were recommended but as my age progressed, the symptoms got worse. After many misdiagnosis', at age 25 I was diagnosed with chronic insomnia w/ bipolar rapid cycling and schizoaffective disorder. Treatment was started from there. Now at my age of 53, I have been there, done that. I achieved many mental health awards and certificates to teach teachers and consumers and family members. I'd be happy to share what I learned. Thank you, Dan, for doing this blog and speaking out this serious mental health disorder.

You make some very good points. I have schizoaffective disorder and have always had sleep problems. Just in the past few years I have finally found a doctor that treats me for it and my anxiety. I don't think people without a mental disorder can relate very well with the thought of someone having problems sleeping. Once I started medication, I have felt like a new person. Life is good once again!