The Two Paths Of Schizophrenia

Though I write a blog on Schizophrenia, I have no clinical experience on the subject. In fact, I have rarely spoken with someone suffering from the same debilitating condition which I am afflicted with. I can only remember a few times that I had a conversation with someone who was actively psychotic. One of these occurred at a local coffee shop in the heart of Cincinnati several months ago when a man walked in with tattered, unwashed clothes and sat down on a stool next to mine. He was convinced that he was Superman and that Republicans were following him and putting ideas in his head. Even to me, these ideas seemed particularly bizarre and I almost laughed. Yet I could not help but realize that I, myself, could have easily succumbed to a similar fate if it was not for the medical attention and care I have received throughout the years.

The Downward Path of Schizophrenia 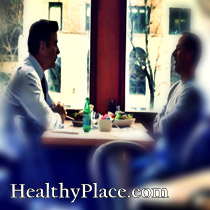 In this man, I saw a path which I could have easily followed; endless homelessness, an inability to care for oneself and extremely psychotic. Somehow destiny allowed me to follow a different path, which years ago seemed impossible. I bought the man a cup of coffee and spoke with him. I neither confirmed nor denied his beliefs, as it was clear that he was utterly convinced of his delusions. Instead I simply listened and smiled as he told me I had special powers and I was likely a superhero myself. He went on, barely intelligible, for some time and I gave him five dollars before he left. That entire day, I could not stop thinking about this man and the conversation we had.

As destiny would have it, I ran into the same man months later. We talked and he was unable to remember our previous conversation. Though I spoke with him only briefly, he seemed like a different man; relaxed, clean, and rational. The difference was almost shocking. I sincerely hope this man had received the help he needed and that he will continue his treatment indefinitely this time.

These incidences made me realize that there are two paths with Schizophrenia. One in which we are forever trapped in a cycle of delusions and hallucination and the other where we learn to control them. We must choose the latter, else we find ourselves trapped inside of a fantasy world. Even if you find yourself there, it does not mean that you can’t return. With Schizophrenia, there is always hope for recovery. You may even find yourself feeling like Superman, instead of being him.

The Spectacles of Schizophrenia
An Artist Not A Doctor
melissaroberts
May, 10 2014 at 6:43 am

Hi. I am a 38 year old wife of 16 years (and counting), mother to 3 girls who all have special mental health needs. I'm a full time therapist to them, a teacher, a cook, taxi driver, christian, writer, and I'm a Paranoid Schizophrenic!!
I have had to learn to live with this debilitating illness my whole life. I was diagnosed with early on set schizophrenia when I was 7 years old....YEP 7 years old!! My road to recovery has been a walk through hell and back....but I've done it...and so can you!!

Hello Ive been diagnosed with schizophrenia for more years that I can remember. I've taken several different kinds of med to no avail. For the past 4 or 5 years, I've been taking Clozaril. For me, this drug is like a miracle .HealthyPlace is my favorite site. Id like to hear from others with schizophrenia if you would like to talk. Terry Mamcox(AT)aol.com

Gee, I am so glad I have found this blog of yours, Dan! First of all, let me thank you for the help you gave me writing all of this, it really, really helped me a lot! I hope you haven't stopped writing and I'll see new posts in the future.
I am not suffering from schizophrenia - at least not yet, but a close friend of mine, who happens to be my mother's cousin, so it's about my uncle, has been suffering from schizophrenia for over 35 years, yet he speaks fluently three foreign languages (English, French and German), he's one of the best chess players in the world and a great person to talk to, even though most of our discussions are via the postal office. Also, my grandmother's been suffering from it for 30-35 years too... Uhm, I only want to thank you again for helping me with various information about the illness; I'm becoming more and more fascinated with mental illness (especially with schizophrenia) and I hope one day I will be able to help the ones suffering from it. You have my respect, Dan, keep it up!

Hi Paul. Thank you for reading my blog. I hope to start again at some point in the future. I have been in a real funk lately both creatively and emotionally. Schizophrenia is a terrifying yet fascinating illness. I think many people simply do not understand it's nature. Having a mental illness is painful, but that doesn't mean that you have to stop living your life. As in your uncles case he continues to play chess even though he has Schizophrenia. I was wandering this however: Is it scary for you that many of your relatives have Schizophrenia? Were you ever worried you might contract it? Just curious. Dan

Thank you for the story. I too suffer from the illness but am doing pretty good with it. What I have realized is that we have to come to the point where we can honestly look at the delusions we are creating. Delusions that are not based on anything but our imaginations. Having said that I still get lost in those delusions but believe them much less. Even writing on this blog brought paranoia to me. I thought that bad people may be putting it together, but I caught myself. Do you still battle with episodes?

I still have transient symptoms under particular circumstance (when I don't sleep, stress) and I am still on medication for my symptoms. I surely don't want anyone to become paranoid reading my blog or become sick. I guess the symptoms of this illness are similar for different people, which might explain this. It is strange to think that our imaginations and belief system can be so destructive. I hope by reading this you can catch your symptoms before they get out of control.

Well i do agree with all the top paragraphs that you can slip into deep delussions and they can get worse. I also agree you can feel like superman or even feel to good were you act irational. The superman place is were you want to be the peferct spot were everything is interesting and an adventure its like keeping a quarter balaneced on titering wooden plank you cant let it roll to far to one side or the other. You need to keep it steady in the middle. It takes eating a good diet juiceing, medication on time support,outlets,faith, lerning social behavoirs like respecting others. Respecting authority. Disciple self control, love, upstaing from harmful things to you spirit. Be willing to give up bad habits, humbeling yourself asking for forgivness when you hurt others. And a relationship with God through prayer.

A realistic view of this debilating condition.