Debunking the Rock Bottom of Addiction

This concept of “hitting rock bottom” is a common phrase in addiction awareness, intervention, treatment, media, etc. People often have a story of their rock bottom. However what exactly is a rock bottom and how important is it in recovery from an addiction and getting sober?

You Have to Hit Rock Bottom Before You Will Get Sober 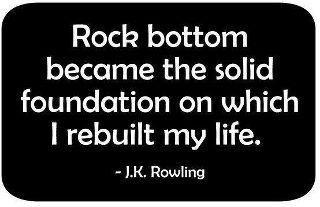 You have probably heard this a lot. That people have to hit a rock bottom before they can get sober. I know I have a rock bottom story, in fact I have probably five really awful lows, and one that stands out more than others. However, these “bottoms” were not the end of my drinking. I actually continued to drink despite nearly dying from alcohol abuse and dependency. Why is this? Because an addiction is a complex struggle, and not as simple to understand as people would like to believe it is.

“How can you continue to drink despite nearly dying?!” from loved ones doesn’t go unheard, however when you are facing instant gratification with something that works to help you cope in life, the alternative seems foreign. Your life doesn’t seem to have the choices people think you have. It is as if you live in a tunnel and while logically you may know something, emotionally it doesn’t register, because

There was a recent study from the Department of Psychology and the Sahlgrenska Academy at the University of Gothenburg, Sweden that found “After only four years of problem drinking, a significant decrease in the function of the serotonin system in women's brains can be seen.” If you do not know what serotonin is, it is the system that regulates such functions as impulse control and mood.

Alcohol of course affects impulse control and choices when under its influence, but I think it is important to share these studies that show the consequences on our mood, and the unknowns of recovery even when we get sober. This can affect how we perceive of the concept of “rock bottom.”

Getting Sober Without a Rock Bottom

I hear a lot of people struggle with comparisons, especially in treatment. I know when I was in rehab for 30 days, I was shocked at some of the stories I heard, because I had never touched drugs, and there was no way my story was as bad as theirs.

Somehow the brain tries to rationalize it is okay to continue with your addiction, because your story isn’t as bad as another’s story. Maybe we haven’t hit rock bottom, because another’s is way worse than ours. I think this could be why a lot of people delay getting sober, or struggle with staying sober.

Defining Our Own Rock Bottom

I believe it is really important for each person to stop the comparisons and look at their own relationship with the substance they struggle with. It doesn’t matter how much you drink or use, it matters the consequences on your own life (Are You an Alcoholic: Looking for Similarities).

I heard once from a friend that someone shared the analogy of an elevator to explain the rock bottom concept. When the elevator is going down, each person has the option to get off at any floor; you do not have to wait to get to the basement to get off. I loved this because a lot of people may question if they are an “alcoholic” or someone that needs to stop drinking or using based on how low they have gone. I think if you notice it is a problem, and the consequences are affecting your family, friends, work, health, etc, then getting off the elevator at a higher floor is actually a blessing! How amazing to get off before you hit a lower point in order to build yourself up from there.

I do not think you have to label yourself, or be an alcohol or substance dependent in order to cease using them. I believe, if it is affecting your life in a negative way, and you have hit your own personal low, then good for you for that awareness and start your recovery and journey from there!

How Do You Define Your Personal Rock Bottom?

For me, there were a few keys to knowing it was time to stop drinking, however it wasn’t nearly dying that was the ah-ha that made me stop drinking. I was sick of playing a victim to my addiction, and was ready to make changes and prove to myself and my loved ones that I had everything to lose if I continued down the path I was on, and everything to gain in sobriety.

Some of my personal rock bottom defining points:

How would you define your personal rock bottom?

In addition to surviving manic depression, sobriety has been a way of life for me for well over a decade. I believe hitting bottom is essential, it is the moment when you surrender the illusion that you are in control - when you admit you are outgunned. - That said, it is a very personal thing. I had a low bottom, it had to get very, very bad before I was ready to admit I needed help. But I have met many high-bottom people who didn't lose jobs, families, health, etc. As I say, what is "as bad as it needs to get" for you may be very different than what has to happen for me to wake up. The point is that you arrive at the "aha" moment when you are finally honest with yourself.