You might not have plans to drink alcohol on New Year's, but millions of people do (Staying Sober For New Year's: My Plan). New Year's day is infamously one of the least safe days to be on the road. The American National Highway Traffic Safety Administration (NHTSA) reports that while New Year's 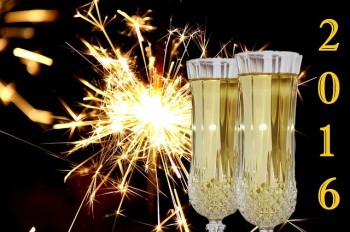 Day is not often not the deadliest day on the road (that dubious distinction usually falls on Thanksgiving or Independence Day), but it is the day with the highest percentage of traffic fatalities involving effects of alcohol impairment. In addition, both traffic fatalities, in general, and those involving alcohol impairment occur much more frequently at night, and many New Year's revelers are out late into the night.

Alcohol-impaired drivers are not the only traffic hazard: intoxicated pedestrians and bicyclists contribute to unsafe conditions. A pedestrian or bicyclist who's been drinking alcohol is more likely to act erratically and disobey the rules of the road, creating hazardous conditions for drivers.

Car accidents are not the only safety issue that comes up on New Year's Eve: intoxication can lead to other types of accidents, fighting, unprotected sex, and alcohol poisoning. It can also increase the opportunities for assault or even hypothermia We should all know about the effects of alcohol on our brains and bodies so we can minimize risky behavior caused by substance abuse. According to information from Brown University Health Promotion, a blood alcohol content (BAC) of .05-.06 produces mild sedation and a slight decrease in reaction time and fine muscle coordination. At .07-.09, people experience more significant balance problems and impaired motor coordination, hearing and vision. Keep in mind, at this stage you are hovering around the legal mark of intoxication in most states, .08 BAC. At .11-.12, people experience distinct impairment of mental faculties and at .14-.15, they show major impairment of mental faculties and motor skills. At this point, the Brown researchers say, partyers need medical evaluation. 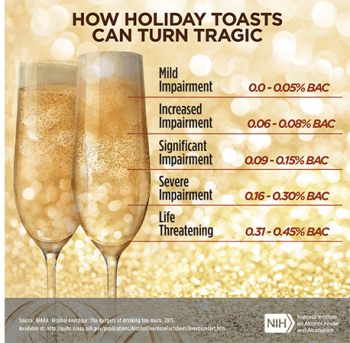 Due to widespread binge drinking, getting to dangerous BACs might not require as much drinking as you think. For a 125 pound woman to reach around the legal limit--which still is impaired and can still lead to driving under the influence arrest in many states-- requires only two servings of alcohol. For a 150 pound man, about three servings of alcohol will get him to the legal limit.

According to a report from the Centers for Disease Control and Prevention (CDC), six Americans die every day from alcohol poisoning. Although binge drinking is most common among young adults, the large majority of alcohol poisoning deaths were men ages 35 to 64. In other words, alcohol poisoning is not just a problem for teenagers and college campuses.

Here are some ideas to help you celebrate New Year's Eve safely.

Of course, these safety tips are good to keep in mind year-round. As a person in alcohol recovery, I always find New Year's prospects challenging, since the emphasis of most events is on drinking alcohol. However, I also do not feel compelled to go out on New Year's Eve, and oftentimes it seems more hassle than it's worth. However you decide to ring in the new year, I hope you all stay safe and I wish everyone good recovery and mental health in 2016.