In addiction recovery you have to focus on staying sober even during a tragedy. The weekend's news about the tragedy in Orlando has left many of us feeling sad, angry, shocked or even defeated. As an alcoholic in recovery, I have to carefully work on staying sober during any tragedy. 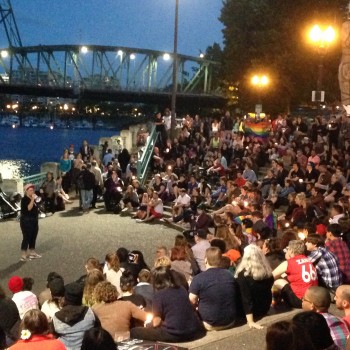 Tragic events can cause a loss of motivation in all areas of life, including addiction recovery. When I woke up to the news of the nightclub shooting on Sunday morning, I was not exactly shocked, but weary. Weary of hearing about mass shootings and other tragedies far too often. I was weary of the fact that I was not shocked. I was weary that my country does not seem to be able to get a handle on violence.

When we read about senseless loss of life, one tragedy can build on another in our minds. I do not know the neurological or chemical mechanism by which this happens, but I believe bad news can have a profound effect on our wellbeing and addiction recovery. I have heard people say that, specifically, they drank and used over the state of the world. Furthermore, at certain times in our lives, we are more vulnerable to bad news than at others.

I cannot pretend to know what it is like to have lost a loved one in such a manner or to have lived through such a terrifying event. But despite that, if I can offer anything, I hope it is as a reflective, sympathetic member of the addiction recovery community (and the LGBTQ community).

My Reaction to the Orlando Tragedy

When I heard about the shooting, I, of course, thought of the Sandy Hook and South Umpqua Community College shootings, the latter of which occurred in my state. But I also thought of images I had seen of a boat capsizing in the Mediterranean Sea, of the plight of migrants, of the bloodshed in Iraq and Syria, and even of climate change and a friend of mine's impending divorce. These events are not related, other than that they are all sad and remind me of my powerlessness. The problem is that sometimes dwelling on too many tragic events can lead to feelings of despair and hopelessness. These feelings are especially dangerous for recovering addicts and alcoholics. We cannot become dismayed to the point that we say, "What's the use of trying?" and allow our addiction to take over.

Addiction Recovery and Staying Sober in a World Full of Tragedy

We cannot afford to give up hope. It is good and right to grieve, but we must remember that a drink or a hit will make nothing better. In some ways, these are disillusioning times we live in, but they are not the first and they will not be the last. Co-founder of Alcoholics Anonymous (AA) Bill Wilson wrote in a 1962 article:

We of AA now find ourselves living in a world characterized by destructive fears as never before. But in it we nevertheless see great areas of faith and tremendous aspirations toward justice and brotherhood.

Wilson was writing during the height of the Cold War, the year before the Cuban Missile Crisis brought America within spitting distance of a nuclear holocaust.

Wilson goes on to tell a story involving an AA member that happened 20 years prior. An early friend of the fellowship, Father Ed Dowling, was fearful for his alcoholic friends in the wake of the Pearl Harbor bombing in 1941. Father Ed watched men who normally did not drink turn to the bottle. After all, Pearl Harbor realistically meant that the United States would be dragged into the larger world war. When Father Ed went to check on his alcoholic friends, however, he found that they were still sober. They told Father Ed (paraphrasing) that they had already experienced personal tragedy through their addiction, so they did not see the sense in drinking over the Pearl Harbor news. To me, this reaction translates as: why respond to world tragedy by inviting personal tragedy?

I bring this up as a reminder that while these are challenging times, times are always challenging. As a student of history, I do not necessarily believe the world is becoming a better, easier, or more peaceful place, nor do I believe it is becoming worse. I do see change. I love the instant access to information that I enjoy in contemporary life, but some of it, particularly the commercial, 24-hour news cycle that surrounds us easily whips up fear, outrage, and hopelessness. I watched the cable news channels on Sunday morning, but, eventually, I had to turn it off. I prayed, and continue to pray, for the deceased, the injured, and all those personally affected, as well as for direction for our country (and the world). As I am able, I will read the profiles of the victims, because it feels like something positive I can do to honor them. But I will also safeguard my emotions so that I do not inch toward despair and hopelessness. Perhaps I can help someone I encounter today.

The Orlando Nightclub shooting is a tragedy. I, like so many other Americans, want to do something to help, and to reduce the violence in this country. I do not yet know what I can do or if I can do anything directly. But I do know that as a person in addiction recovery, the only way that I can put forth any sliver of positivity into the world is to maintain my sobriety.

[Quote is from The Language of the Heart: Bill W's Collected Grapevine Writings, page 268.]