As someone nearing 30 years old, my book library consists almost entirely of young adult (YA) novels. I love The Hunger Games, the Ender's Game series, and I even read part of the Twilight saga. It seems to be quite in line with popular culture to be reading YA books right now. With the stories of so many young adults running around in my head (and maybe in yours, too), you'd think there'd be some ADHD kiddos floating around. There wasn't until I picked up Rick Riordan's The Lightning Thief in audiobook. 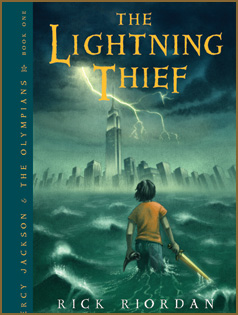 This is a partial book review, because I'm not done listening yet. Even still, I think it's worth a read. The plot is interesting: Percy Jackson is a boy with dyslexia and ADHD. He has a really difficult time with school and getting along with his peers. When we meet Percy, he is at yet another new school, having been kicked out of several prior to the start of his story.

Pretty early on in the book, after he has already disclosed his ADHD diagnosis, he discovers that his father isn't dead - that's just what his mother told him to explain why his dad wasn't around. Turns out, his dad is a Greek god and Percy is a "half-blood". At this point, Percy makes his way to Camp Half-Blood and he meets other kids of other gods. They were all diagnosed with ADHD, too.

At camp, Percy gets a sword and a shield. He gets to play intense games of capture the flag with his fellow half-bloods and, for the first time in his life, he feels successful. He finds reading Greek to be a breeze; he doesn't even need to study the language. Things start to make sense for him.

How is this relevant to this blog? Good question. No, great question. This isn't even an adult book! I think it's a book worth reading that can be relevant to our lives, because it shows a different side to the treatment of [Young] Adult ADHD. The Lightning Theif isn't a book that tries to dope up the main character to fit into societal norms. Once Percy becomes more active and is taken out of a classroom setting, he thrives. Percy isn't forced to conform to the norms of life; his life conforms to the way his brain works.

Just like Percy isn't meant to sit still, behave and do his work quietly, not all of us are either. Desk jobs don't always work out. We need to be out there, doing something interesting, something we can find success with. It's not fun to be a 9-5 pencil pusher when you're not good at it and when it makes you less you. For five years, I sat at a desk, pushed a pencil, and felt confined. For me, working as a physical therapist is what will allow me to be me and to be successful. Where do you find your success?