Growing Up and Out of Adult ADHD

Back in 2007, I had a memorable interaction with a doctor. He was taking my medical history and inquired as to why I was taking Concerta. I replied that I had Adult ADHD. Astoundingly, he told me that I shouldn't have that anymore, because that's only for children. Also, he was curious about why a woman would have it to begin with. Ah, such is our struggle in this world. 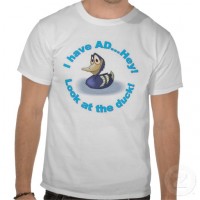 Why don't we just grow up, take responsibility for our actions and stop blaming our Adult ADHD for our issues? The findings of a long-term study regarding children with ADHD and whether it persists during adulthood was published in April 2013's issue of Pediatrics. One third of those in the study with childhood ADHD also had Adult ADHD. They also found that those who had childhood ADHD were more likely to have one or more other psychiatric disorders when compared to the control group. The risk of mortality and suicide were also increased for those with childhood ADHD versus the control group.

This says to me that ADHD is real. Though we have yet to determine a gene for the disorder or a clear-cut medical exam, life outcomes can lead us back to a single cause some times. If it walks like a duck and talks like a duck, it probably is a duck. That might not always be the case, because it could be a penguin or the person who voiced daffy duck after a hip injury. Still, odds are, it's a duck.

And, odds are, if you've been diagnosed with Adult ADHD or childhood ADHD, that's what you have. You don't suffer from chronic immaturity or lateness - you are a survivor of a pretty frustrating disorder that can lead to some pretty frustrating behaviors.

If you're among the luck 2/3 of those with childhood ADHD that magically lose it after age eighteen, I would hazard a guess that you were able to get super good at coping mechanisms that make it look like you no longer have ADHD. If it's true, and studies show that it probably is, that our ADHD brain is fundamentally different from those without ADHD, it's highly unlikely that your brain structure would change enough to have you lose the disorder.

I didn't start out writing a grumpy-sounding post, but I believe it has turned out that way. The purpose of this post is to reassure you that what you're going through is real. If you've been diagnosed with Adult ADHD, don't let some random doctor make you feel less than because he doesn't think it's real. No one can know your reality but you. I'm sorry for the rant, but this is what I was feeling today. Be proud of your ADHD. Next week, my post will be brighter and filled with all the positives ADHD can bring!

APA Reference
Prager, E. (2013, April 8). Growing Up and Out of Adult ADHD, HealthyPlace. Retrieved on 2022, September 27 from https://www.healthyplace.com/blogs/livingwithadultadhd/2013/04/growing-up-and-out-of-adult-adhd

Isn't it ridiculous. I mean I was only diagnosed 4 months ago, after 10 years of people thinking it was just depression and anxiety. (Still got those too) haha. I think people really have issues with ADHD, because its associated with naughty kids... Well we aren't naughty kids. We are human beings. Suffering at the hands of a hidden illness that seems to be hell bent on destroying us from the inside out. Plus they are just jealous because once we get help, we beat them at being awesome. Muhuhahahahahahaha. I refuse to hate my ADHD. I couldn't bare it. I try to embrace it. Try being the key word. Hahahaha.