Hello all, I'm writing this post on a Sunday evening after I caught myself several times being super-duper ADHD - I could not stayed focused! It was a studying and cleaning day for me and I was having trouble studying and cleaning today. The studying was freaking me out because one lecture was taking me over an hour (which just about never happens for me) and the cleaning ... yikes, the cleaning ...I don't really ever enjoy studying unless it's self-directed. I love what I'm learning in school, but since I'm not in a clinic right now, I find myself lacking the motivation to really drill things into my brain. Unfortunately, I have a test next week, so my brain better shape up quickly!

My wife is at work today, busy sitting at a front desk and promoting Quist, her relatively new LGBT app. I look upon her working in awe, wondering how she has so much darn focus to commit to one activity. Sometimes, I look at her with grumpiness after my many attempts to distract her prove unsuccessful!

[caption id="attachment_1289" align="alignleft" width="320" caption="Ever get lost between cleaning your cat's litterbox and doing just about anything else? That's what happens sometimes on Sundays with Adult ADHD. "] 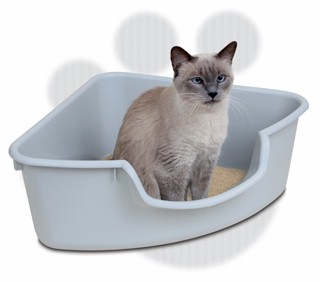 What did I do that was so very ADHD today? Well, I first emptied the litter boxes (Nemo and Moo, you're welcome) and then I realized about half an hour later that I hadn't refilled them with litter. I had already begun to rearrange the study, while simultaneously cleaning the bedroom. Oh, also, I was making lunch and had set up the kitchen to clean out the refrigerator.

About a half hour after realizing I hadn't filled the litter box with new yummy litter, I realized again that I still hadn't done it. I dropped what I was doing, apologized to Nemo and Moo and then went back to vacuuming, which I began in the study and progressed to the kitchen and bathroom. For some reason, I neglected to vacuum the living and bedroom. This was a weird day for cleaning.

What's weirder is that I wasn't supposed to be cleaning today. I told my wife that I was definitely going to study all day. Remember? I have a big test on Thursday and studying is important (just about all the experts have said it is ...).

With daylight having already faded and my adult ADHD medication wearing thin, I think I'll read a book and finish the soup I'm preparing. Oh, yeah, I also started making a huge batch of soup to last the week. This haphazard way of doing things is what happens when I neglect to make lists! If I had listed out what I needed to accomplish today, then maybe I would have done more. As it is, I got a lot done - but, they were mostly things that didn't actually need to be done ...

ADHD focus is like herding cats, not an easy task. Creating specific task boundaries or permission zones to focus on "one" thing is often quite useful.
The runaway brain likes to jump tracks and go to the next thing that captures the mind. Creating structure even in 10 minute increments can help provide focus for those days when there is so much on the mind.
It might be as easy as writing down the "one" task, setting a timer and going for it. Any way to compartmentalize the task can help. One task - one thought - one goal and a fixed time to do it in. Then go back and create a new task when the first one is done. It can become a game and many people with ADHD like games.

WOW! Change some of the tasks you accomplished along with swapping the cats for an 11-month old puppy, and you wonderfully described my daily life. I'm new to the 'diagnosis' of ADD/ADHD - not sure which one actually applies - and this is the 2nd post I've read that you've written. I'm going to put on my list of things to do: review your other posts.
For most of my life, roughly the past 30 years, I've been oblivious to this not being normal or common for other people. Through the years, I've found ways to manage through deadlines, classes, jobs, projects, new business ventures, etc.
Even while writing this I took a side-track to briefly check out your wife's app, Quist. I love history, am a member of the GLBT & HIV communities, and excited to download it soon. Congrats!
Oh yeah, thank you for sharing the details of your day!!
Take Care.

Thank YOU for reading them, Michael :) I hope your puppy is as cute as I am imagining he/she is and that things become clearer with your new diagnosis. It may never be perfect, but - to steal a phrase from the wonderful Dan Savage - it gets better :)