Raised by Parents with Mental Illness 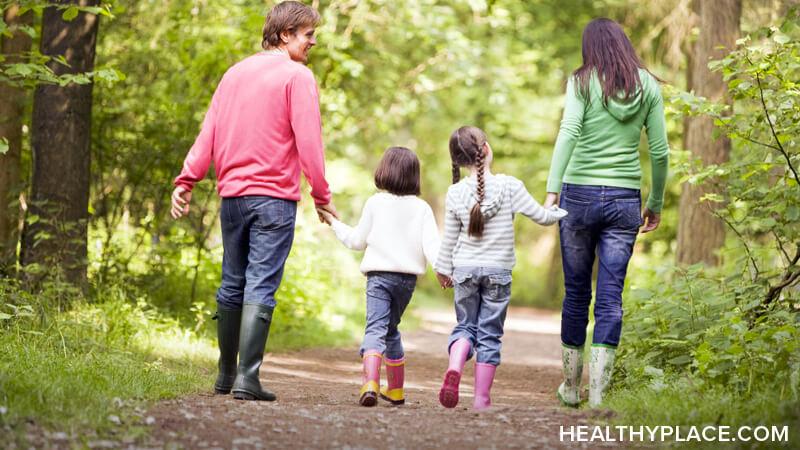 Problems Stemming from Being Raised by Parents with Mental Illness

My mother and father had mental illnesses, which means not only was I raised by people that were mentally ill, but some of my aunts, uncles, cousins, and siblings had mental illness as well. Individuals with mental illness can be stable and loving, and it is true that my own family had these characteristics at times. However, there were periods of time where the stability of my family life eroded when mental illness flared up.

These times of instability created a consuming confusion that affected how I made sense of life as a child. These phases instilled in me a general distrust in people's character since I believed that they had the potential to morph into someone else so completely at the drop of a hat.

They also instilled in me the ability to read body language very intuitively and react to it on an instinctual level in order to diminish possible conflict. This may seem like a good skill to have, but it cuts down on the genuine feelings I could have in relationships due to trying to protect and guard myself.

On account of my parents having a mental illness, the stability of their personal and financial choices fluctuated. As my family's financial status shifted, we had to move around to where we could afford to live. This frequent moving made it very difficult for me to develop at the same rate as my peers.

I found it very difficult to open up to people who could have been good friends to me, and I fostered a disturbing distance between me and everyone around me to spare myself the pain of having to lose possible friends when I inevitably moved again.

Of course, my parents were doing their best to satiate their own personal needs as well as mine, and I can acknowledge that now, but at the time, this frequent moving and the resulting difficulty making friends infuriated me.

Parents with mental illness are not bad parents. In fact, it takes incredible bravery and strength to face mental illness each and every day and be able to push forward and give a child everything they deserve. I admire my parents and am thankful for everything they have done for me, but it is also true that due to my upbringing, I have had a difficult time making friends and an unstable family life.

Acknowledging this and taking the steps towards forgiveness and understanding is the only path forward. What characteristics did you see in your childhood due to being raised by parents living with a mental illness? Leave them in the comments below so that we can understand each other better.

APA Reference
Paige, A. (2021, May 31). Raised by Parents with Mental Illness, HealthyPlace. Retrieved on 2021, September 16 from https://www.healthyplace.com/blogs/mentalillnessinthefamily/2021/5/raised-by-parents-with-mental-illness

Normalizing Mental Health Discussions
Mental Illness in the Family as a Healthcare Professional
Linette Davis
June, 20 2021 at 11:49 am

I had an alcoholic father and a severely depressed mother.May they both rest in peace.They didn't know how to deal with their problems.My mother stayed in bed all the time and my dad just never tried to do anything for her or himself.Neither of them went to any kind of therapy they always said they were fine.My 2 sisters and 3 brothers all think we were raised normally but I knew better but I couldn't say anything.Everyone who has parents need to watch for signs of mental illness.If I had known then what I know now .....everything would have been different back then.Theres a price to pay if one r both of your parents is mentally ill.

Beautiful, honest writing. This is something that I'm sure many will read and be grateful for. Those with mental illness who choose to have children and take on parenthood make a very brave choice indeed. Thank you for sharing your reflections and experience.