Both Sides of Bullying Affect Children with Mental Illness 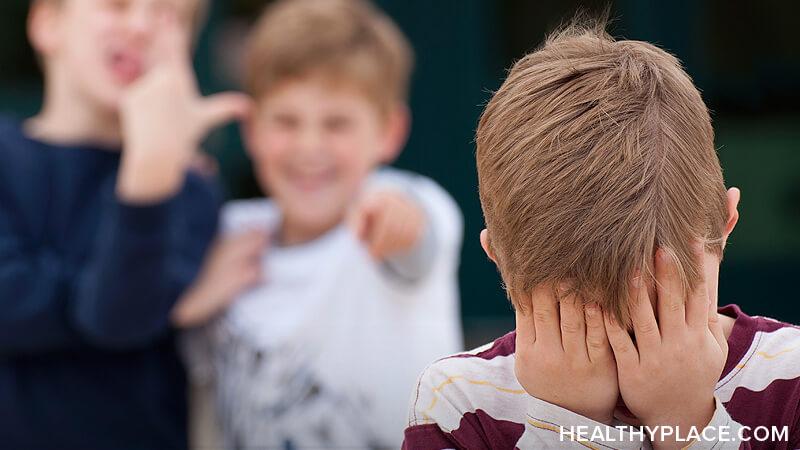 My children start school this week, so I'm back to worrying about both sides of bullying. As a parent of a child with mental illness, who is not going to be mainstreamed this year, the fear is real. Will he be bullied for being "special ed", or will his behaviors make him the bully? I tell myself that, if I can just get him through adolescence, he'll be okay. In the meantime, though, how do I manage when I understand that both sides of bullying could affect my child's school year?

Most of us know what bullying looks like. If you want examples, though, you can look as close as the response to my last post. The comments supported the decades-old adage that one should never read comments sections. They also demonstrated, however, that parents of the Internet continue to model bullying behavior for their kids.

There are multiple types of bullies. The sadistic/narcissistic type lack empathy and may bully to satisfy personal needs, like counteracting low self-esteem or silencing emotional fears. An imitative bully, meanwhile, is following their friends' examples. Once removed from a bullying culture, they may not be a bully at all. An impulsive bully lacks control over his or her behavior. He or she may regret the bullying later.

Both Sides of Bullying and Mental Illness

Based on the above examples, one can already see how children with mental illnesses or developmental disorders can land on either side of the bullying relationship. A child on the autism spectrum, for instance, may miss social cues and say something hurtful without knowing it. While this could look like bullying, it usually results in other kids bullying that child for being socially awkward.

My son has attention-deficit/hyperactivity disorder (ADHD), which includes a lack of impulse control. If provoked, he will respond without thought. There's a particular boy in his class who knows this. This boy will sit next to my son and start tapping pencils or whispering insults. My son's response is to go straight to shouting. The teacher punishes him (and not the bully), and so he has an angry outburst because of the perceived unfairness. During outbursts, he swears, intimidates others, and throws things.

To someone not paying attention, my son looks like the aggressor in this situation. I've tried to explain to him that he should calmly ask the other child to stop bugging him. He should ask the teacher for help, I say. My son knows this intellectually, but he lacks the impulse control to follow through in the moment. In the moment, he's simply angry.

How to Combat Both Sides of Bullying

First and foremost, model appropriate behavior. Don't be a bully. If you witness bullying, do something. Talk to your children about their experiences outside the home and help them process complex social situations that can be hard for us, too. Don't be afraid to feel uncomfortable. Be aware of what your child is doing on the Internet. Talk openly about mental health, including acknowledging that anxiety and depression are normal responses to stress.

If your child is experiencing suicidal thoughts, get help.

People can also text CONNECT to 741741 from anywhere in the USA. Maybe you're afraid your child won't tell you if he or she are suicidal. There's no shame in posting these numbers in your home.

If your child has an individualized education plan (IEP), add bullying concerns to the plan. Whether this means structuring a classroom so that your child doesn't have to sit next to their bully, or coming up with a behavior intervention plan for your child to stop bullying, the school can do something to address the issue.

Lastly, be strong. Having children already make us stronger than we thought we could be before parenthood struck. As a parent of a child with a mental illness, I feel like I have to be a full-on superhero sometimes. So be that for your child. Be a superhero.

Tags: both sides of bullying

Melissa David is a mother based out of Minnesota. She has two young children, one of whom struggles with mental illness.The support and wisdom of other parents proved invaluable to her in raising both her children; and so she hopes to pay it forward to other parents via Life With Bob. You can find her on Facebook and Twitter.
Create Mental Health Safety Contracts for Teens with Bipolar
The Miracle of Electroconvulsive Therapy (ECT)
Jessica
January, 29 2018 at 7:39 am

Melissa, /thank you so much for this post-I wish I could make it go viral. In fact what I really wish was that I go back in time and make it go viral several years ago when my son was the victim of similar bullying, and unfortunately he responded similarly to your son. He actually was labelled the bully, even though the school councilor who he did one to one therapy and social skills group with each week and I tried to explain to the school that his outbursts were reactive to being the victim of bullying. It took about 4 years for the school to acknowledge and do something about the subtle bullies that would quietly wind him up and then sit back and enjoy the show. In fact it took him fusing to go to school for weeks and having to do exposure therapy and build up school attendance over the course of 2 months along with threatened litigation before they were forced to really look at the antecedents to his sudden outbursts.
Things were better for while. However a friend of his who had been in his classes and in his school based therapeutic groups and social skills group recently committed suicide after being the victim of severe social media bullying by kids and parents in our community following him making the bad choice to vandalize the local elementary school and write messages about death on the buildings. Instead of people saying-hey this kids is probably really depressed we should help him- they blasted him on social media, begged for him to be looked up and world throw away the key, and some even made hate speeches and wrote hate mail to his family about how they were horrible people who couldn't control their child. On the community facebook page some people tried to help but the bullying was tremendous. Two weeks into this the boy committed suicide and his suicide contributed to by sons hospitalization for being suicidal just a week after his death.
Now my son is petrified that when he goes back to school, the very place where he was declared a danger to himself after disclosing his grief to a grief councilor and taken by ambulance to the hospital in front of a crowd of onlookers, that he will be next inline for the bullying. I feel like I am at my wits end. I have an appointment with the IEP team to set a safety plan for when he returns but what do I do about the possibility of bullying? I can hope that the kids and their parents have learned from the tragedy to not bully people but how can I be sure that its going to be ok.

That's so awful. I have to admit my worst nightmare for m own child is the situation in which cyber bullying is out of control and causes him to end his life. It sounds like you're doing what you canon your end, especially in setting up a new meeting for the IEP. Definitely advocate to include bullying protections in his IEP and on a behavioral intervention plan. Some states and cities have anti-bullying laws specifically in place for schools, so you may need to do some research in your area to see what laws the school has to follow that might help you advocate for your son. If certain triggers for his behavior are well documented on the IEP/BIP, that might better help the school understand what might be causing behaviors with him. It might also help them be more aware of what to look for. I wonder if it might be worth talking to the school social worker, too, about what type of anti-bullying curriculum or programming they have at the school and whether students are required to go through it. After such a tragic, devastating situation as a teenager ending his life, it seems like something the school should be invested in. One place I always refer people (because it's a national association) is NAMI, or the National Association of Mental Illness. They have lots of resources for families and friends of people with mental illness (www.nami.org). They may know of more local resources for you or, at the last, some support groups for your family. I'll also provide a link to national suicide prevention lines. There are some that are text message based, which are helpful for teens who may be less comfortable talking than texting. Have the numbers readily available in your household so that, just in case your son is too scared or embarrassed to ask openly for help, he can still find the numbers and call for help if he feels he might harm himself. The hotlines are just there to talk and won't necessarily immediately call 911 or intervene in that manner if he calls. The idea that someone might jump straight to calling an ambulance when a kid mentions suicide can be scary for some teens and keep them from talking openly. Here is the link: https://www.healthyplace.com/suicide/suicide-hotline-phone-numbers
Best wishes to you. I'm glad you could find something to relate to in my post! It's a tough world out there, and it's nice to know, at the very least, that you're not alone in going through it.

Great read. So important to discuss, but especially this time of year. "First and foremost, model appropriate behavior. Don’t be a bully. If you witness bullying, do something." -- this is KEY. In so many ways children learn more from what we do than we say. That being said, be sure to back up action with speech and vice versa. You have the power to be an incredible example and role model to your child. This can be a huge benefit in fighting against bullying.