Lying About Self-Injury Scars: When Memories Scratch Back

All self-harmers know that they are professionals when it comes to lying about self-injury scars (Explaining Self-Injury Scars to Others). The first time I made up a story was when a student asked me about the cut on my forearm before Chorale practice. I rolled my eyes and told her a story about how I’d tried to balance my cat on my arm and it hadn’t worked out too well. After that lie had been said, I remembered how she’d been around my cats before and she may have realized they had been de-clawed.

After the girl noticed the self-harm scar, I began wearing more and more bracelets. I didn’t like her asking and when she had asked, my stomach dropped to the floor and I’d felt nauseous. I never wanted to feel that way again and even when I used bracelets and make-up to cover the marks, I knew it wasn’t always successful when it came to hiding them. Even when they were covered, they were still there screaming at me to make more. 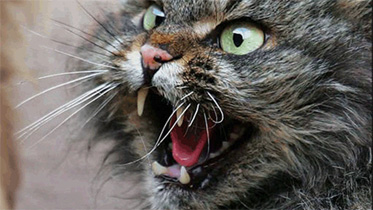 Last week, I went to my friend’s house for Chinese food, wine and a night of Big Bang Theory. She’d always talked about her cat and, being that I love animals, I was excited to spend some time to meet her pet. Instantly, I was drawn to the animal, like I am with all animals. I was shining a light on the floor and watching the cat chase after it and rubbing the cat’s stomach like anyone would. However, when I began to play a little rougher with the cat, the claws came out.

Growing up, the family cats had been de-clawed. So, when my friend’s cat’s claws came out full-force, I was caught by surprise. The nails scratched me a few times here and there, but one mark stood out. A big, red line had been painted diagonally across my wrist right through the purple ribbon tattoo I have. At first, I was mad because the cat had scratched my tattoo. After I looked at it longer, I instantly started picturing how my wrist had looked over five years ago.

Over five years ago, I’d had numerous self-injury cuts, just like that one, all over my forearms.

It’s funny how one little mark can bring back years of frightening memories. Those who have overcome their self-harming addiction probably still have these kinds of flashbacks when these kinds of things happen. No matter what the circumstance may be, when marks appear in places where intentional cuts or burns used to be, emotions go crazy.

I realized that night that even when I see marks on people’s arms and assume they self-harm, most of the time I am probably wrong. The stories self-harmers make up to push away the truth, actually do happen to people. I know now that assumptions can’t always be made just because of mysterious marks.

Maybe I hadn’t been trying to balance the cat on my arm like the story I’d made up years ago. But I sure learned that memories could definitely be triggered when something similar happens to the lie that was told.

Self-Harm and Exhaustion: Wake the Heck Up
Self-Harm and Friendships: Pushing People Away
Charlotte
February, 27 2019 at 6:11 pm

This is really strong of you, I keep pet rats and they scratch at me a lot, and for me I have just collapsed for the first time in a long time... they gave me an extra load of scratches the other week and seeing the scratches on my arms made me feel the need to add more... which is very annoying as i’m actually feeling really good at the minute but just seeing the scratches there gave me the massive urge and stupidly knowing I have an easy excuse as all my friends and family had already seen the rat scratches so they wouldn’t notice a few extra... but yea I just think you’re very strong and it shows you’ve done really well at kicking the habit!