Self-Harm and the Semicolon Project: Your Story is Not Over Yet

During one of my nightly adventures on Pinterest, I came across a tattoo that instantly grabbed my attention. Being a writer, and someone who has some tattoos, the semicolon on this person’s wrist made me want to seek out more information about it. As I looked further into the reason behind it, I came across the Semicolon Project that had been started in April of last year.

The Semicolon Project was created for those who were going through struggles with self-harm, depression and suicide who could have stopped moving forward, but didn’t.

The reason the semicolon was used as the symbol of the movement was because in a sentence, it is the punctuation mark that separates two different ideas. A period can replace a semicolon, but people use a semicolon because they do not want to end that thought.

Therefore this represents what the Semicolon Project strives for: not stopping when you can keep moving on.

Never Stop Telling Your Story - Even if it Includes Self-Harm 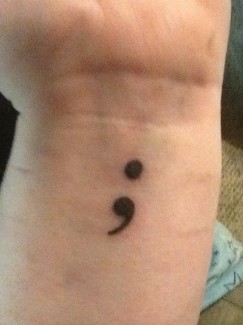 Many people know of the To Write Love on Her Arms movement, but this project seemed more like something I’d be a part of. I’ve always been drawn to unique ideas and by making the semicolon the main focus of the project, it made me realize how it really can be used in our everyday lives.

The punctuation mark represents moving forward when you could have stopped. It shows us that there is always more to the story and more to tell. During our struggles with self-harm, we at times feel like there is no hope and no use fighting the urges to hurt ourselves. We may feel brought down by the stressors surrounding us and cutting or burning may seem like the only coping skill left.

This movement is about pushing past those difficult feelings and finding a safe way to move forward because there is more to our stories than self-harm. For those lost in the struggle, you cannot let self-harm define you. You have to define yourself in positive, supportive ways that will help you push past the urges and towards the help that is out there.

The Semicolon Project continues this year on April 14, 2014. Similar to the To Write Love On Her Arms movement, you simply draw a semicolon on your wrist. By having this symbol in perfect view, you will tell yourself to walk past the razors and scissors that may flood your sight and thoughts.

I will most likely post something when the day comes closer. I find this movement to be very unique because of the symbolism used. Maybe it’s just the writer in me or my past struggle with self-harm, but the Semicolon Project seems like the perfect way to give an extra push to those who need it.

And we all could use a little push in the right direction.

APA Reference
Aline, J. (2014, March 28). Self-Harm and the Semicolon Project: Your Story is Not Over Yet, HealthyPlace. Retrieved on 2022, September 27 from https://www.healthyplace.com/blogs/speakingoutaboutselfinjury/2014/03/self-harm-semicolon-project

Self-Harm and Eating Disorders: More Alike Than You Think
Self-Harm and Self-Acceptance: Yes, This is About "Frozen"
Deborah
August, 23 2018 at 2:15 am

I have my semicolon by my thumb. I had it tatood outward in the hope of asking for help. Noone is.

There's always going to be some one or others to help. Ask about. But the hardest thing you'll ever do is seek n ask for help. But it is there.

I hope u recover !

I have suffered from Anxiety and Depression for many years, and being a Gay Catholic added to my Depression. I was so ill in 1984 that I had to take a long leave of absence from work. My parents gave me no help or support, and my best friend thought that she was helping me, but she was not. She thought that yelling at me helped,and she thought she was Joyce Brothers, even though she never finished her MSW. I now see a therapist, and I am on medication. I was years before a Dr. finally diagnosed me properly. I am happy that I never had the nerve to go thru with suicide, but I know how horrable they must feel. I now go to a Gay Friendly Church, and I have a wonderful partner. NEVER GIVE UP

I want to get this tattooed when I graduate high school. It has such a great meaning

I've suffered with depression for years. I can't explain it, but when my daughter called to tell me about the Semicolon Project, I didn't give it a second thought. We're scheduled to get out tattoos on Friday.

It's very great project. Some people failed in her life so this project is useful for them.

...Hi! This picture was the picture I posted the day I got my tattoo! Like... It's my wrist. How did you get this picture??

i have anger issues and panic attacks and depression. i really dont have that many friends and i use guys to hide the depression and anger. people call me a whore and other names but i dont want to say. im tired of being called theses names and all. but i have quit dating for awhile i have been with this one guy for about 5 weeks and the names has quit sorts.

I'm so sorry that you are going through that. It's been so long since you posted this and I'm just now reading these articles. I never knew about this until now. How are you doing now?

Thank you for this article. We greatly appreciate it and all who support the project and what it represents. We are privileged to have this opportunity to have such a strong movement and meaning behind it. For more information on the project feel free to check out www.projectsemicolon.com.

Hi There,
This is a great article. However, this is not linked to "The Semicolon Project" rather than that it's linked to "Project Semicolon"
If you would like to know more about our authenticity, please email me.
- Matt

Seems you've tagged the wrong FB page for the Semicolon Project. The real one is here: https://www.facebook.com/SemiColonProj