Does Having PTSD Make You Violent? 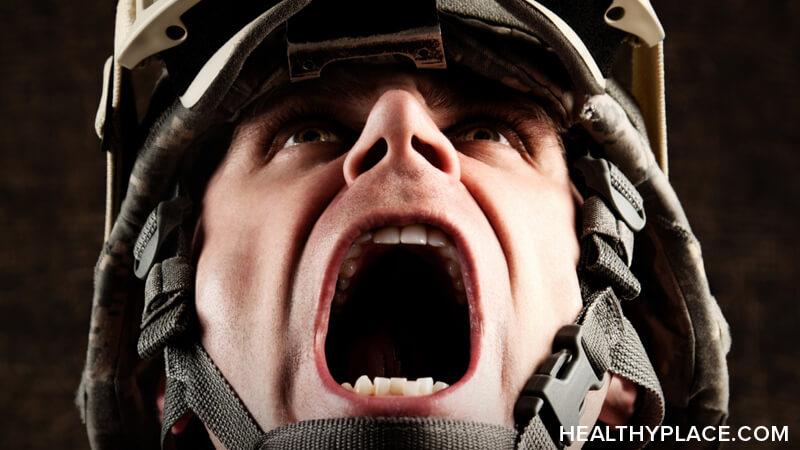 Before I continue, I want to offer my condolences to those affected by the recent Las Vegas shooting. I can only imagine the pain you are feeling. I hope that you are able to access the care and support you need to heal from this traumatic event as best you can (Traumatic Events and How to Cope).

Whenever a tragedy involving a lone gunman and multiple fatalities takes place, we wonder why it happened. What went wrong? Our social media feeds buzz with conversations about politics, gun control, and mental illness. Often, we tend to center the mental illness discussions on what kind of mental health problems the shooter may have had and what kind of treatment he did or did not receive.

A lot of people seem to associate PTSD with violent acts. Surprisingly, there are not very many studies published about this potential correlation. The ones that do exist tend to focus on combat veterans and violence. Of course, war is a specific form of trauma; people with PTSD from combat may experience it differently than people traumatized by other types of events.

With that in mind, what do the veteran studies say?1 Combat veterans with PTSD showed a slightly elevated risk of committing some kind of physical aggression, which included threats of violence. A smaller percentage demonstrated a history of severely violent behavior with PTSD. Subjects who also had a co-occurring substance use disorder were more likely to engage in violence of any magnitude. When accounting for the substance use, the risk of violent behavior with PTSD was only slightly higher than in the overall population.

My Experiences with Addiction, PTSD and Violent Thoughts and Actions

I'm not a combat veteran, but my own experiences of living with posttraumatic stress disorder as the result of domestic violence reflect the research data. When I was abusing drugs as a means of masking my painful PTSD symptoms, I was emotionally volatile and aggressive.

One of my most prominent PTSD symptoms is a shortened emotional spectrum. Of those emotions I do feel, anger and sadness are the most intense. When I was addicted to heroin, and intermittently abusing alcohol and other substances, I was quick to feel anger. Not just anger, but rage.

I did not plan out acts of violence, nor was I going around beating people up, but I did punch a hole in a wall, for example. I yelled, called people names, and harbored violent resentments toward my abuser and other people who hurt me. I would definitely say that when I had co-occurring PTSD and substance use disorders, I was a more aggressive person than I am today.

I still have PTSD, but my addiction is in remission. My emotional spectrum remains shorter, and I am quick to take offense or spiral into periods of intense sadness, but I am no longer aggressive. I don't spend time thinking about harming others. I am better able to control my anger instead of lashing out. These tendencies didn't erase themselves the moment I stopped using drugs, but as my period of sobriety has increased, and I have engaged in other recovery supports, I have felt more and more in control of my anger.

Attributing tragic events like the Las Vegas shooting to a violent person with PTSD or another mental illness is overly simplistic. When something like this happens, we, as a society, seek a source of blame that allows us to regain a sense of control. While blaming mental illness for these events can feel empowering to some--after all, isn't it easy to just say anyone diagnosed with PTSD, schizophrenia, or major depression can't own guns? This groundless labeling ultimately places blame on innocent populations. It also fails to address the complexities of these situations. Violence with PTSD may play a role in some mass shootings, but it's not the only factor. The majority of people with PTSD are not more violent than anyone else.

I Wanted to Make My Abuser Suffer
Change the Stigma Around PTSD by Changing Self-Perception
Cale
March, 19 2019 at 12:47 pm

PTSD doesn't make you violent, BEING VIOLENT GIVES YOU PTSD!!!

I am glad you brought this up. As a combat veteran I would like to weigh in. After I returned from Iraq, before I sought help for my PTSD, I felt a lot of rage towards anyone at the drop of a hat. I do believe the only reason I didn't turn violent is because I had a lot to lose. I had a great career and a new fiance' to think about. I do believe that if I felt I had little to lose, I would have given in to my violent feelings. I could certainly see a person with PTSD and placed in a situation in which they felt they had little to lose becoming violent. That being said, I would be more fearful of one on one situation than a mass shooting. I was always triggered by an individual and felt malice toward that person, I never felt angry at 'society' or a group of people.

I know this reply is a little late and I apologize for that; for some reason I am just seeing it now! But I wanted to thank you for sharing your experiences. And I totally agree. Of course, now yet another tragic shooting has taken place, this time at a school and a number of children were murdered. School shootings take an even heavier toll on our social consciousness because they involve youth--often both as victim and perpetrator. But I think it's important to note those two factors that you mentioned; people with PTSD are people--who have loved ones and lives they do not wish to lose. Often, substance use leads to loss of social connections, so that may play a role in the (slightly) heightened risk for violence. But again, as you said, it's individual violence. Anger toward a triggering person. I've had the same experience. I have never, ever fantasized about shooting up a store or a school. Whenever I wanted to hurt anyone in anger, it was always a lone person who had triggered or offended me. And I've become a lot calmer since discontinuing regular drug use and engaging in treatment. We need to keep telling these stories. Disassembling these myths is important to reduce stigma, but also so that we as a society can focus on the real issues that lead to these tragic events.