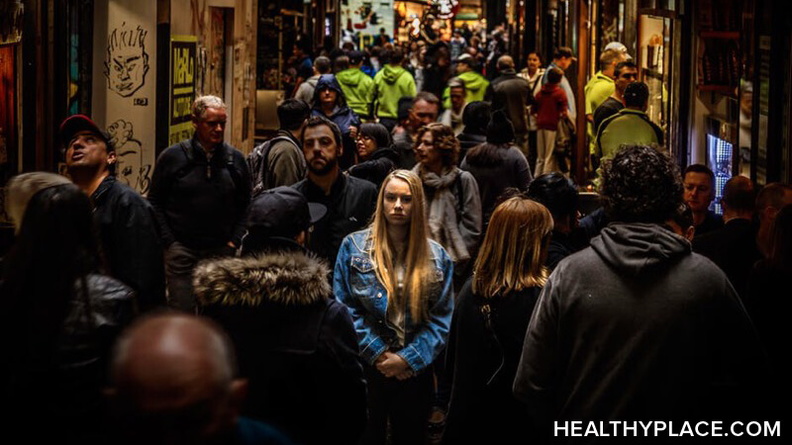 As was the case for me, signs of depersonalization typically begin in the mid- to late teens or early adulthood. It is not seen in many young children, or in older adults.

The first aspect of depersonalization that I noticed was the feeling that I was viewing and interacting with my environment without sensations or emotion. I felt automatic, pre-programmed. I knew on a rational level that I was still a walking, talking human, but I moved about and interacted with people as if I was an aircraft on auto-pilot. While these robot-like moments were relatively frequent, they were most noticeable in public places.

When I was alone, a more common feeling became the sensation of being physically numb, or without the ability to feel any physical sensations. It was as if I was surrounding my body, but not actually in it. An abnormally high pain tolerance often accompanies depersonalization, which may add to this perception of numbness. Even now, while I have not felt depersonalization in decades, my pain threshold remains high.

APA Reference
Hollowood, T. (2017, November 15). What Does Depersonalization with PTSD Feel Like?, HealthyPlace. Retrieved on 2022, November 27 from https://www.healthyplace.com/blogs/traumaptsdblog/2017/11/what-its-like-to-experience-depersonalization-with-ptsd

Why Kids Trigger Parents with PTSD and What to Do About It
Personal Rituals Can Protect Trauma Survivors from Stress
Jennybear
July, 25 2021 at 12:12 am

I was held hostage by a pedophile for two years as a teenager.
Years later I had a sexual encounter and I knew I didn't want it but instead of fighting I just sort of shut off. I felt myself watching this rape scene, and when I woke up the following morning I literally believed I'd dreamed the whole thing. Like I wasn't in my body at all, after he was done, he left, I calmly washed the blood out of the carpet, showered, and went to bed. I slept fine and woke up dreaming I'd been raped the night before.... Till I took the morning piss and it was like hot acid.
Another sexual encounter I had anticipated and hoped for also did transpire, but my traitorous brain drifted off to Pangaea then, too, and I can only recall it in fragments, as though I were very drunk at the time. I wish I could recall that better but I can't control it.

What does it feel like?
You wake up monday morning, everything is fine but you had some really weird and even realistic dreams. You go to work and everything seems fine til you realize it isnt monday. It's Thursday. The days between Monday and Wednesday are a mixed blur of dream like situations that could be real but have such gaps and holes in the details that they dont really seem to be.
Your co-workers ask if you feel better today, but you have no idea what they are talking about. You panic trying to piece together the missing days and figure what happened, and more importantly why it happened all at the same time you are trying to look calm and collected in front of co-workers. But nothing comes to you, the world spins and you wake up again. It's Saturday, you now lost a whole week and now have no clue what is going on in your world.
That's a small sample of what it's like