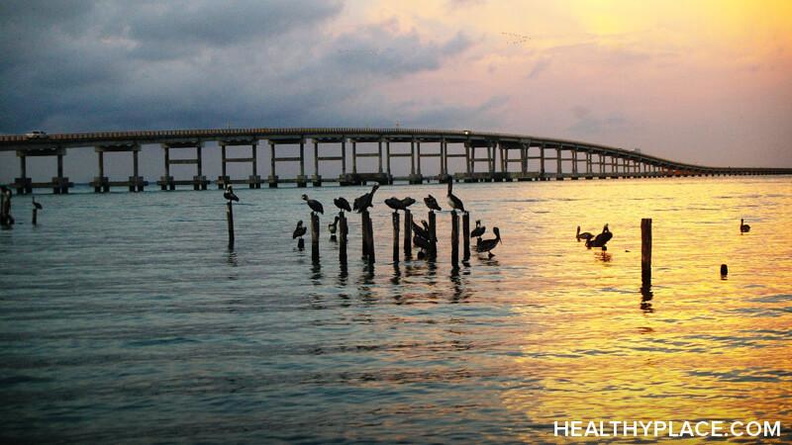 You’ve heard the term "binging," as in binge eating and binge drinking. It means excessively indulging in an activity, especially eating. Like binging on chocolate or going on a binge by drinking too much liquor. I have experience with both.

Tricks To Help Get You Through

I’m somebody different than anyone thought. My mom, my friends, even my doctors thought I was fun loving, confident and super social. What I was, was a well-insulated actress. Somewhere along the line, I confused using tricks to make myself feel calm or excited or interested in things with having to use them in order to simply be okay.

We all use little tricks from time-to-time in order to “fake it until you make it”, but the healthy use of those catalysts is to be an occasional bridge between how we feel and whatever’s next. Feeling tired before you’re committed to going to a party? Turn on your favorite song and dance like a mad-woman and you’ll perk up a bit. Feeling anxious while preparing a presentation? Do some stretches and breathing exercises. These are the tricks that help you get from what you are to what you need to be in order to do the next thing.

For me, my tricks got way out of hand. Feeling lonely? Black out in the kitchen while eating an entire box of mashed potatoes and brick of cheese. Anxious about going to a party? Leave 45 minutes early and do shots at the closest bar until small talk comes easily. Had a bad day? Mull it over repeatedly while plucking eyelashes that don’t curl just the right way.

In other words, if I had to bridge the feelings that I was experiencing with feelings I thought that I should be having, my choice of bridge was to binge and I crossed that bridge on a daily basis.

The Effect of Binging 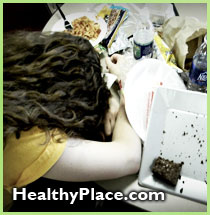 Binging was an immediate soothing sensation. The food calmed me like a tranquilizer, the liquor helped me to find entertainment in things that were really mundane and hair pulling helped me to overcome annoyance. It gave me an immediate relief from thinking about anything else because it was such a precise activity. The problem with soothing myself while abusing myself was, because of the nature of my binges, I was saddled with the evidence that I could not hide and that shamed me horribly.

The shame over my readily apparent struggles reinforced the bad day, the sense of self-consciousness, the feelings of inadequacy and self-loathing. How can a person live in their skin and feel those feelings and be expected to get excited when seeing others? Can she feel anything other than failure when looking at the idealized American female standard? How does a woman, devoid of control over her destructive impulses, who is metabolically unhealthy, eyelashless and craving a drink, how does she get back to genuinely feeling good about herself?

How Do You Deal with Binging?

For me, the answer was I gave up.

The bigger picture involves me having to go to rehab for my alcohol abuse, however, that was not anywhere near the end of my binge episodes involving other behaviors. I did quit drinking and that’s an important point, but attending to the alcoholism only gave me a better idea of the
baseline I had to work from in order to address what was harder on my sense of self, my binge behavior.

It was almost two years after I completed treatment for alcoholism that I started to understand there was more I needed to do if I wanted a life that I thought was worth living as Me. A life that didn’t include terrifying periods of lost time in the kitchen or magnifying glasses in the mirror with tweezers. A life where the idea of seeing my family didn’t come with a wave of dread and shame and urges to hurt myself in order to lose weight.

That was when I started to look on the Internet for some place to talk to others about what it is like to experience a binge. A loss of control so big and so enveloping that there is no fighting it. An urge that compels you to do things to yourself that you would rather die than do again, yet makes you continue doing it until you feel a sense of relief from having done it. I wanted to find people who had experienced that and I wanted to know I wasn’t alone in the shame of having succumbed to it time and time again.

The problem for me was that I couldn’t find the right place on the Internet to go for that sense of community. I found fat shaming sites and diet sites that talked about weight loss. I found deeply personal and moving blogs written by people who had experienced the degradation of hair pulling too but these were not opportunities to discuss their posts or to communicate the emotions around the binge experience. They serve purposes but they didn’t serve my purpose and that’s when I decided to build what I was looking for online – BingeBehavior.com.

I’ve found that for my personal development, I need additional help. With the guidance of a therapist trained in Binge Eating Disorder (BED) and art therapy, as well as an amazing group of women in an ED group-therapy setting, my life has finally become my own. I spend my days running every aspect of my website which is dedicated to supporting people who binge. I go to therapy and I go to group each week. My life is focused on learning how to recognize the signs of a oncoming binge and to understand and honor what is really happening inside me.

I spend a good part of every day working to get beyond the traps I’ve set for myself that tell me I’m not good enough the way I am. In doing so, I’ve realized that I’m nowhere near the person I thought I was. I’m not the person I tried to pass myself off as either. I’m deeper, I’m more compassionate and I’m stronger. Oh, and I’m much, much happier.

With Mental Illness in the Family, You Don't Get Lasagna
Confronting the Postpartum OCD Monster
Monica
May, 7 2013 at 3:41 pm

What a beautiful and wonderfully shared story of HOPE! Thank you, Lizabeth.