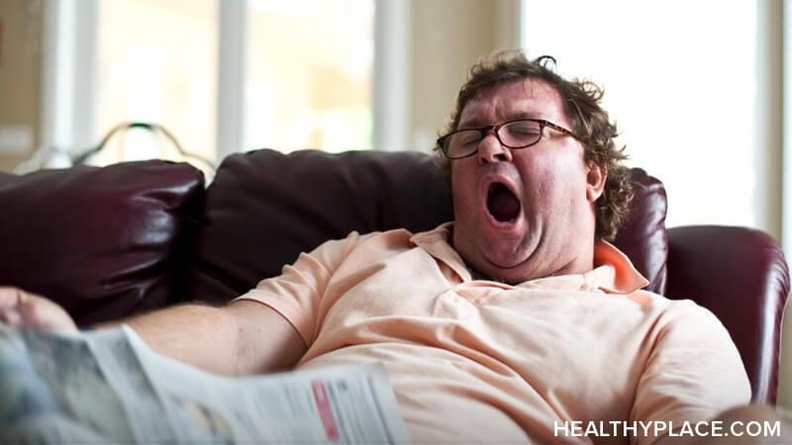 For me, fatigue is not just a symptom of an illness listed in a giant encyclopedia of diagnoses; for me, fatigue is practically a way of life. If I didn’t have a day where I was so tired I wanted to curl up in a ball with my cats, I’d be downright shocked.

Of course, “loss of energy or fatigue” is specifically listed in the Diagnostic and Statistical Manual of Mental Disorders (DSM-5) as a symptom of bipolar (and unipolar) depression. In my view, it’s one of the more disabling, ongoing bipolar symptoms, but that’s just how it presents in me. Because whether I feel acutely depressed or not, the fatigue is almost omnipresent. It’s just one symptom that the medication doesn’t seem to squelch. I’m kind of famous for my naps.

Of course, if you have bipolar disorder and you’re feeling fatigued and you’re also on medication, the fatigue you’re experiencing could be a side effect. Fatigue is a side effect of the following common bipolar medications:

And so on. You’ll find similar side effects noted for most, if not all, antipsychotics for bipolar as well.

How Do I Know if My Fatigue is Bipolar- or Medication-Related?

Determining if something is a side effect generally goes like this:

And if you really want to know whether something is a side effect you can always switch medication but there are oodles of downsides to doing that.

What to Do about Bipolar Fatigue 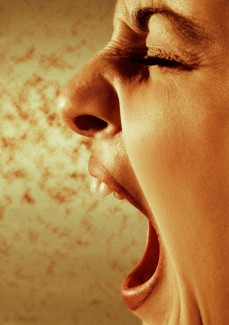 Of course, no matter why you’re feeling fatigued, really, all the matters is that it be treated. If it’s related to a medication side effect, then handling it usually involves decreasing or switching medications. If the fatigue is mood-related, though, what you really want to do is better treat all the mood symptoms. In other words, if you have significant fatigue often, you’re experiencing a bipolar depression symptom often, and we know that partial treatment of bipolar depression is less than ideal and tends to lead to less favorable outcomes. (People in complete remission with no lingering symptoms tend to have better long-term outcomes.)

Common strategies for dealing with fatigue include:

So, the short story on bipolar and fatigue is this: you don’t have to live with it. Certainly, with the strategies I’ve employed, I’m a lot less fatigued than I was before. The solutions might not be perfect (When are they ever?) but they are available and something you should discuss with your doctor if fatigue is an issue for you.

Please note: no treatment is right for everyone and trying to beat fatigue with something stimulating could increase your risk of switching to hypomania/mania or a mixed mood which means that working with your doctor on something like this is extremely important.

Bipolar Depression Treatment -- What to Do if ECT Fails
Unsolicited Advice About Bipolar Disorder
Amy
September, 22 2015 at 9:20 am

While I wish fatigue wasn't a side effect for any of us, it's nice to know I'm not the only one struggling with having a lack of energy.
I had this type of fatigue even before I was diagnosed as Bipolar II. I have tried to eat well, exercise and it's still there. The only time I can remember not having fatigue is during a hypomanic (and I've come close to full blown manic) phase. Otherwise, it's relentless. I take Lithium and Wellbutrin.
Yes, I do miss those hypomanic phases when I would be super productive, though the mass destruction that followed was not always great. I've lost friends and completely ruined my finances. Especially after my last episode of racking up 20K of debt in 3 months, which I'm still trying to pay off. And after racking up that debt getting fired from my job on a depressive run where I would sneak out during lunch and be gone for 2-3 hours because I had to nap. I didn't tell them I had to nap obviously, but my boss was always wondering where I was, so in part I blame my fatigue.
I find myself getting frustrated I feel this way when my friends don't have this problem and can keep a clean house, stick to social commitments, don't always feel tired, etc.
I kept thinking there was something wrong with me and it wasn't normal to feel tired all the time. I'm only a year into being diagnosed as bipolar. I now have a work from home job which offers me flexible hours. I find this perfect for my situation. Now if I need a nap, I take one and find I'm more productive when I get up. It's still not easy by any means and more of a work around to manage my life.
I don't want to accept or embrace the tiredness. I have hope to find a way out of it. If not, I'm going to continue to work around it the best I can. If anyone finds a magical solution, please share!

Dear Sick and Tired,
Hang in there! Take one day at a time! It is hard to head into the fall/ winter time now. I too have bipolar and it sucks! I take lithium and lamictal. I am always tired. Try not to think about what you can't do but rather what you can do. Take naps and don't feel bad about it. Don't compare yourself to others. And drink as much caffeine as you want, definitely helps me.

I'm so damn tired of being sick and tired always fighting for some semblance of health. It's exhausting and sometimes I get so frustrated that all I can do is cry. I'd give anything just to be normal for a change. It seems that most medications are geared toward mania which can be quite sedating especially the antipsychotics which also come with other nasty side effects like weight gain while there's almost nothing that consistently helps with the ensuing depression. Why is that? It's so unfair. It ticks me off that my doctor won't give me antidepressants because he's concerned I'll become manic again. I wish! I suppose I should be grateful though. I try to eat right and exercise but it's hard to find the energy, motivation and discipline to do that all the time. After work there's not much energy left for household chores, etc and by weekend I'm completely burned out. So I'm pretty much left to my own devices. Lately I've been living off of coffee and protein drinks which help to keep me energized for a while so I can get some stuff done but it isn't very practical in the long run. I'm worried about the Fall and Winter months ahead 'cause I know it's only gonna get worse and there's not much I can do to stop the decline except hold on and ride it out again for the umpteenth time. Seriously I'm so fed up with all this bullshit. Some days I sit there for long periods of time staring into space and wondering how much longer I can keep living like this and is it even worth the effort to keep trying. Then I curl up on the couch and have a nap until I can pull myself together and try to make it through the rest of day praying that maybe tomorrow will be different

Yes, fatigue can often be one of the worst things to deal with... It can make damn near everything difficult and the window before EXTREME FATIGUE sets in can often be very narrow. As a bipolar ii person, I do take activators such as Prozac and Wellbutrin in combination with Lithium to stabilize. However that's not a one size fits all solution because with someone Bipolar 1 or even 2 with a different chemistry that might cause them to go Manic or Hypomanic. I'm also one of the people that exercise does not give me more energy. In general, my daily routine is enough physical exertion to put my body to its limits so realistically there is not any energy to spare. I've honestly felt like I ran a marathon before at the end of the day when I didn't do anything that most people don't do on a regular basis.

Hi! I found I was always tired,no matter what I tried.My md finally sent me to a sleep medicine specialist. Turns out I have sleep apnea. The CPAP machine works like a charm, I'm not tired all the time, and actually feel refreshed when I wake up. Getting a sleep study done might be worth a try, it definitely helped me.

Dealing with the fatigue is probably the hardest symptom I face daily with bipolar. Its been difficult to even determine the source of it all, i'm a high functioning professional and a level of tiredness is natural, but every single day there wouldn't be a time where I didn't want to curl up and sleep and i'm sure that's not a typical reaction. I can get fatigued very quickly when a particular environment drives my anxiety up. Anyone who has experienced this and tried to maintain a relationship would know this is the hardest part to get right.

I have bipolar disorder and am on Nuvigil which is amodafinal ( or something like that) . It allows me to function during the day.

Fatigue is ongoing for me as well - it doesn't matter what medication I am on. I have to schedule Everything around my fatigue! Like you, Natasha, I just become more tired with exercise. Of course, always feeling fatigued takes its toll on family and friends, guilt walks in, and the depression cycle begins again.

Wellbutrin helped me get up and going. I went through a year of depression until they found me somewhat of an upper.

I'm expirencing the manic part of manic bipolar, and it's a rough route. Some days I just wake up so freaking mad I just cry and cry and avoid my husband so I don't take my anger out in his direction. I have the blues once in a while. Recently went on the depo, and the downs didn't last as long. I usually run high these days, and I mean high.

My psych increased Zoloft and Lamictal and Lithium. I got very tired after one week of adjusting to meds. I'm exercising now

When I have to perform meaning being with others other than being by myself..I drink lots of caffeine.